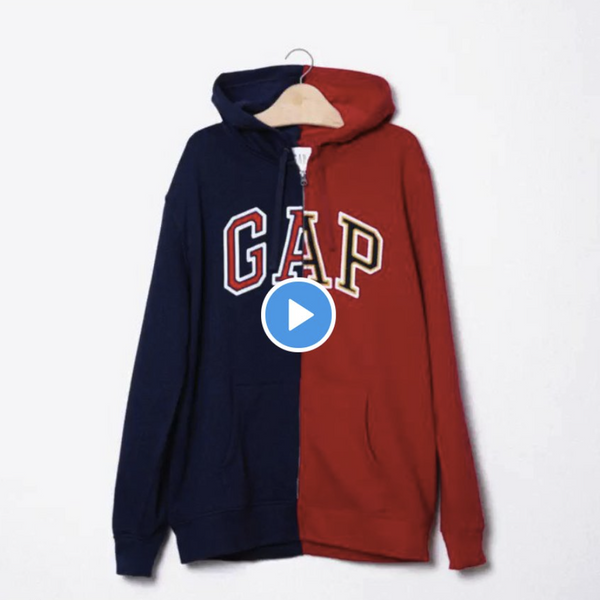 What Was Gap Thinking With That Blue and Red Hoodie Tweet?

For a brief moment earlier today, anxious Twitter users took a break from the hellscape of election stress to come together for an unlikely cause: hating on the Gap.

In a since-deleted tweet, the brand uploaded a GIF of a hoodie with a blue half and red half (yes, Democratic and Republican colors) being zipped up. The caption? "The one thing we know, is that together, we can move forward 💙❤️"

funniest genre of brand scandals are the tweets no one asked for that gets them in trouble. why did gap feel it was… https://t.co/KqqSSbGg7B
— Steadman™ (@Steadman™)1604512450.0

The backlash (and ratio) was swift, with people calling out the timing of its post, tone-deafness, not "reading the room" and the fact Kanye West (who has a deal with Gap) was trying to run for president. Many wondered about all the steps it took for someone in marketing to make this and the amount of people who approved it.

A spokesperson for Gap told New York Times reporter Sapna Maheshwari that the hoodie was not real or for sale, which, OK.

"From the start we have been a brand that bridges the gap between individuals, cultures and generations," the company said in a statement. "The intention of our social media post, that featured a red and blue hoodie, was to show the power of unity. It was just too soon for this message. We remain optimistic that our country will come together to drive positive change for all."

Given how quickly the post was taken down, it's safe to say brands will think twice before providing any kind of commentary (and product tie-ins) during this heated election.