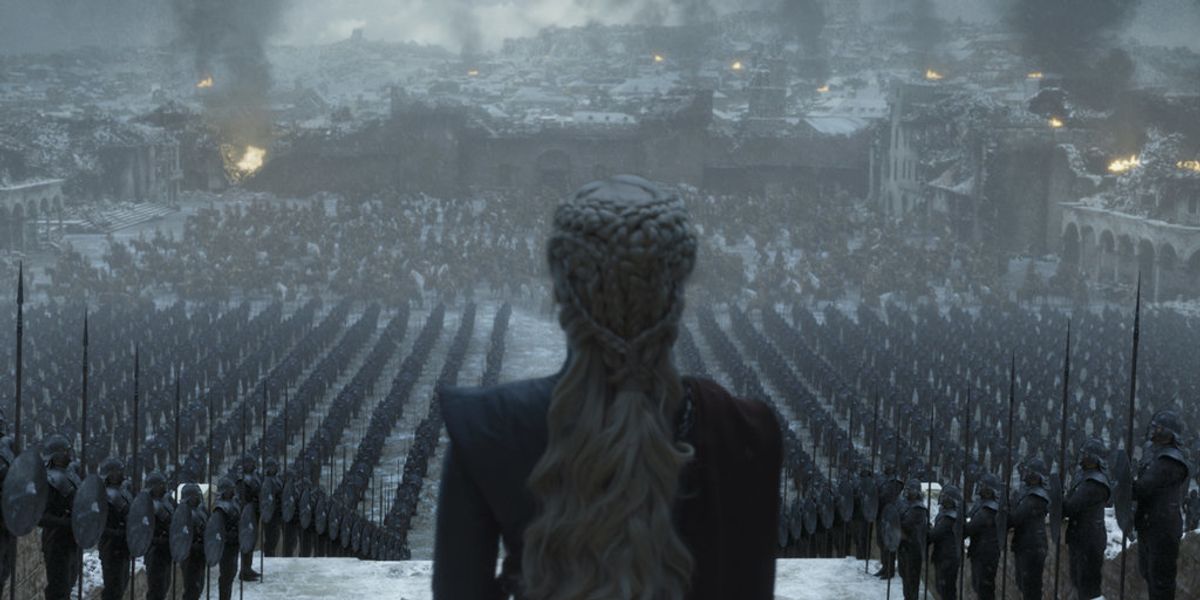 Last night the world watched as HBO's Game of Thrones came to a close. The internet is definitely split on whether or not it was it was a successful ending to one of the most talked about shows of all time, or a neglected garbage fire. Was it the ending we needed, or the ending that we deserved? What is certain is that this feature-length episode definitely marked the end of an era. Since I've declared myself the absolute authority on this, I think it's safe to say that leaving Westeros was always going to be difficult, and the cast, crew, and even the writers gave us an ending that I think we'll look back on in the future as fair, maybe even good.

But since I love being mad at Game of Thrones, I'll say that everyone deserved better. Here's how:

Related | 'GoT' Recap Episode 1: Reunited and It Feels So Messy

Daenerys Stormborn of the House Targaryen, First of Her Name, the Unburnt, Queen of the Andals and the First Men, Khaleesi of the Great Grass Sea, Breaker of Chains, and Mother of Dragons was easily one of the greatest characters in the history of television. Beyoncé puts her on her moodboards. Beyoncé. For the good portion of a decade, we've watched Queen Daenerys rise from the bottom of the food chain to the literal top as she set fire to every obstacle before her from her perch atop a flying dragon. From sold to the Dothraki, to ruling them. From slave to abolitionist. From motherless child to Mother of Dragons. Her death in this episode wasn't bad or wrong as much as it just felt rushed. Have we ever seen Jon Snow make a decision that quickly? After refusing to do anything in one scene to murdering his lover in the next. And poor Dany never even got a chance to sit on the damn chair.

The silver lining: Daenerys did succeed. She defeated Cersei (and then some), and briefly did rule over the Seven Kingdoms. She broke the wheel. Gone are the days of birthright princes and princesses. Her actions, her death, and the smelting of the Iron Throne has established peace for Westeros.

Jon was banished back beyond the Wall. There isn't even a White Walker threat anymore. Sure, I guess he's finally free of all that power and authority he didn't want, but beyond the wall? Why? What is the reason? It's sad to think that the Stark children may never see each other again, especially since Arya has gone off to discover America. Jon Snow finally did something, and this is how he's thanked? Kind of a let down.

The silver lining: Jon is finally done with all of this shit. He can now retire to the Night's Watch with Ghost and Tormund. When you play the game of thrones you win or you die; Jon was never playing.

Cersei has to die, fine, but did she have to die like that? Though she died in episode 7, it must be said: Cersei Lannister was the absolute baddest bitch in all of the seven (now six) kingdoms and possibly even all of television. Maybe even beyond television! Season after season, she ate every single scene she was in and brought the wit, smirks and wine sipping that the show desperately needed. And how was she thanked for that? Crushed by rocks in the basement tunnels of the Red Keep. Look I get it, the writers wanted symbolism — Cersei being crushed by the sheer size of her ill-fated ambition — but was it worth it, be honest? Lena Headey could've turned that rubble into dust with one look. I wanted some powerful last words! A monologue! Swearing to somehow seek revenge! Something! Instead she was given nothing but a tearful goodbye to Jaime and sure, born together, die together. Great, more symbolism. But I would trade all of the symbolism in the world for a more satisfying death scene.

The silver lining: There really isn't much of a silver lining here. I guess the most useful thing that came from Cersei's death was the impact it had on Tyrion. Walking through his burned hometown, seeing the destruction and coming upon his flattened big brother and sister moved him so much that he publicly rejected Daenerys' rule and, in one of the greatest acting moments of Game of Thrones, implored Jon Snow to act.

Drogon carried that episode. The writers should get some credit for making me feel emotionally attached to a CGI genocidal dragon. By he end of the series, Drogon simply has had enough. He saw his brothers die, and now his mom, whom he sadly carried away into the distance cradled in one giant claw (paw?).

The silver lining: Drogon had a 'fuck all of this' moment and burned the Iron Throne to the ground. His impact. His mind. He is the most intelligent man on that show. To recognize that while Jon stabbed Daenerys, it was the throne and the power that came with it that ended Daenerys (symbolism!). He finished her mission and broke the wheel and then collected his queen and got the fuck out of town. That scene was one of, if not the highlight of the episode, and Drogon deserves an oscar for it.

Bran does not deserve to be regarded as Bran the Broken.

The silver lining: He's king now, which he must've saw coming. But still, "Bran the Broken" seems like an ableist crime.

Sam did not deserve to have his revolutionary concept of democracy laughed off like a joke. He's just so 2008, living amongst people who are definitely 2000 and late.

The silver lining: It was kind of a funny scene.

It is the humble opinion of the smartest woman alive and absolute Game of Thrones expert, me, that the finale wasn't terrible, but we definitely deserved better. This last episode seemed rushed — Daenerys died quietly like, 20 minutes in. Certain character arcs *cough* Daenerys and Jaime *cough* seemed completely abandoned, and after Daenerys' death, it all became sort of predictable. The whole of the last season was sold as this ultimate smackdown between two badass queens who refuse to surrender, on top of the threat of the White Walkers, and yet it all kind of…went out with a whimper and not with a bang.

The silver lining: Arya is going to see the world! Sansa is the Queen of the North! Tyrion is alive! Good things did happen this episode, and for that I am grateful. Moreover, it should seem obvious but the silver lining in all of this is that Game of Thrones has been such an amazing part of our pop culture zeitgeist. Each episode a feature length film. Oscar-worthy performances delivered by actors who seemed just as in love with the show as we were. The ending, as polarizing as it might be, was doomed to be sad and a little lackluster, because this is a story millions of people didn't want to end. It's easy to focus on this sort of underwhelming finale and feel cheated, but this season and the show as a whole have changed us as a culture. Every Sunday coming up for the next couple of weeks is going to seem a little empty. Game of Thrones has been a journey with some great moments and some less than great ones, and if you're upset by the ending, it's because you cared, so at least the show achieved that.

Also now's the time to shoot my shot so, @GwendolineChristie please hit me up.