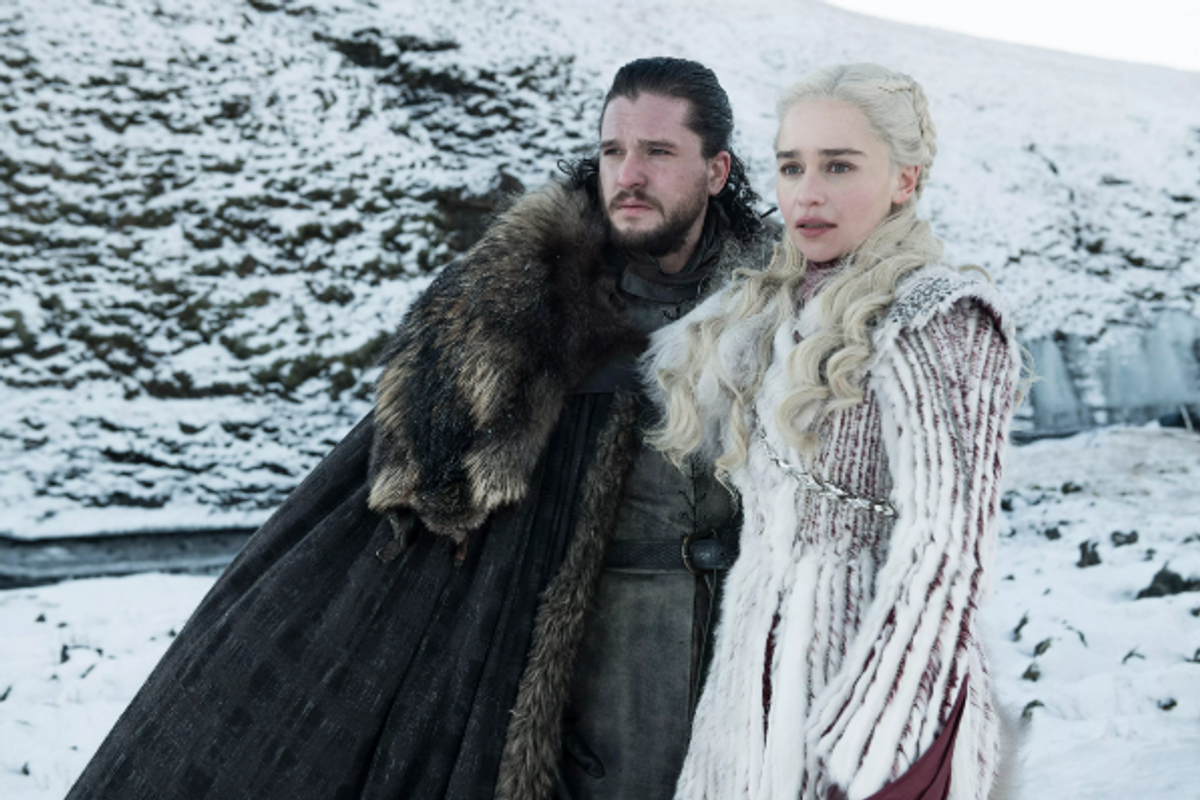 'Game of Thrones' Recap Episode 1: Reunited And It Feels So Messy

It's been two years and finally we've been allowed to return to Westeros! The first episode of Game of Thrones final, eighth season was full of reunions between characters long separated, and also the introduction of new relationships between characters who have never met. With the wall being destroyed, more and more people are showing up in Winterfell to try to not die, together! Let's dive into all the meetings, vengeful, awkward and otherwise:

I would be remiss if I didn't mention: Bran Stark is that bitch. Bran, of course knowing literally everything, knew that Jaime Lannister's old rusty haggard (still hot) ass was due to arrive in the North. Being the petty, grudge-holding queen that he is, Bran waited for Jamie. In one spot. Over night. In the dark Northern cold. The energy that he has! The last and possibly only time the two ever met is when Jaime was shagging his sister Cersei and pushed baby Bran from like, a 20 story window, as a solution for Bran catching them in their incestuous act. The young Stark survived somehow (though lost the use of his legs), probably because he was doomed to become the Raven and get Hodor killed. This episode ended before the two exchanged any words, but you already know Bran will soon deliver some cryptic one sentence read that will send Jaime's horrible wig into orbit.

Boring, a hug and a kiss. Jon says Bran is now "a man" and Bran responds by saying "almost" which is... something.

This was a good one. Arya Stark — who I was going to say was the youngest Stark child until remembering Rickon lol (RIP) — and Jon Snow, our favorite crybaby hero, finally reunite after having said goodbye in season fucking one. It's cute. It's very cute. There's a big hug and honestly it's very beautiful, which is saying a lot because Winterfell is very desolate, ugly and gray. They have a funny chat where Jon 'older brothers' the shit out of Arya. He's apparently unaware of the literal torture and training she's gone through to become a master assassin. Cute.

She asks how he survived a knife in the heart to which he responds, "I didn't." It's nice to see Jon start to show a little sense of humor around the subject of his Christlike resurrection, and it makes sense that it's with Ayra, as they've always been the closest of the Stark and Stark-adjacent siblings. The sentiment was a little ruined, though, when Jon started whining about Sansa, saying, "Sansa thinks she's smarter than everyone." Arya defends her because she's Arya and because she honestly has more important things to do. They all do.

Sansa Stark and Tyrion Lannister's reunion reads sort of like two exes who are at a mutual friends party who like, don't hate each other but also do have some valid hang ups about the relationship. These might include but are not limited to: Sansa abandoning Tyrion after Joffrey's iconic poisoning. Tyrion bringing a new queen to the North and demoting Sansa to basically the equivalent of a local elected official: Sansa Stark, Mayor of Winterfell. As a result the two are still... friendly enough, which is likely just the result of still being alive, having to work together to essentially save the world, and whatever pleasantness remains from their forced marriage. I will say. He's been her best husband, by far.

Arya and The Hound

Arya, like her brother Bran, is that bitch. The gem of this reunion comes from The Hound reminding Arya that she kind of did him dirty, telling her, "You left me to die." Arya corrects him by saying, "First I robbed you," which left both me and The Hound FLOORED. They seem to be on good (that is, non-murderous) terms, all things considered.

So I don't know how old Arya is supposed to be at this point. Let's give her a generous 16. It's true that she's at the age where she's beginning to think romantically and all that, and Gendry is one of the most datable characters. Quiet, skilled, and technically heir to the throne in a weird way. But all of this begs the question: Isn't Gendry like 30? I guess in a world where incest runs wild, this age difference isn't the worst thing ever but it is…a choice. Aside from that, their reunion was very, well…them. She asked him to make some remarkable weapon and he agreed. It was kind of cute, modern laws and morals aside, and I'm excited to see where this goes.

Yara, sweetheart I am so sorry. Last night Theon stunned us all by doing the miraculous task of: something. Anything. I'm not going to discount the trauma and torture Theon has gone through at the hands of Ramsey (RIP, also he was a hot sociopath, don't @ me). But what I am going to do is focus more on the embarrassment of it all instead. Theon time and time again has been shown to be a coward and while his almost too easy rescue of his sister Yara is commendable, it also doesn't erase how much of a bitch he was in the past. Which is why Yara thanked him only after knocking him to the ground with just one punch. A queen amongst men.

Characters Who Have Never Met

First of all, fuck. We find our sweet Samwell Tarly doing some classic Sam shit, reading alone in a dark room. Daenerys enters with Ser Jorah Mormont (who's still hot) in order to thank Samwell for curing him of his disgusting Greyscale which, to give her credit is a nice thing to do. Sam, who literally cannot stop being adorable, asks to be pardoned for stealing books and his own Tarly family house sword. It's at this point that Daenerys becomes aware of the fact that she in fact fried Samwell's father and brother into oblivion for refusing to bend the knee. Some classic Daenerys shit.

Samwell responds to news of his father's death (from the woman responsible) fairly well. Which okay, fair. I can't imagine there are Randyll Tarly stans. Sam's reaction to hearing that his brother, notorious for being kinda nice to Sam and being named Dickon, was a lot more emotional, and fans at home were forced to watch him tear up and…thank Daenerys for telling him. Which is so fucked. It was a hard to watch scene, but necessary to see Daenerys come to face to face with the aftermath of her own bloodlust.

Bonus: If you think Daenerys apologized or showed any real signs or remorse, let me ask you: how does it feel to be an optimist?

A mess. Sansa, Lady of Winterfell and de facto Queen of the North, now has to deal with Daenerys Targaryen, who is gunning to become the Queen of Everything. Politically speaking, Sansa plays her cards right and her people understandably love her. She vows to serve Daenerys in order to save Winterfell from the apocalypse, but not with a smile. The episode was full of side eye glances between the two and Sansa complaining to Jon, Tyrion, and whoever else she talks to about the new implant Queen. Still, she's likely to continue to go along with all of it as long as it benefits the North, and I'm proud to admit I love the drama.

Citizens of the North and Black People

Jacob Anderson, who plays Grey Worm on the show, has recently pointed out that Game of Thrones "could have been better" in terms of race but honestly, the lack of diversity made for an absolutely wild moment in this episode. Missandei (a goddess) and Grey Worm (her unsullied boyfriend soldier) ride into The North with Daenerys and the rest of her entourage. Not for nothing, the citizens of the North are two unchangeable things: 1) Wary of outsiders and 2) White. Like all white. Like more white than we will possibly ever witness in our lives. This means that the moment the Northerners first set their eyes upon Missandei and Grey Worm resulted in bewilderment for all. Mind you, there are literally dragons flying overhead who are also foreign to the Northerners on top of being fucking dragons, and the Northerners seemed more shocked by the melanin riding into town in front of them.

Jon Snow and the Truth

After Samwell Tarly sobbed over his dead family he, as instructed by Bran, went to Jon Snow to tell him he secret about his true identity. Jon is actually the son of blah blah blah and thus he has the right to the Iron Throne. Of course Jon, our perfect boy scout, cares more about the lie his fake father Ned Stark told in order to keep him alive than his fate as the ruler of the Seven Kingdoms. Jon is like that. Dumb. Just like Ned. I feel bad for Jon, he just found a way to rid himself of his title of being King of the North. He basically resigned and was given the ultimate promotion. Poor him.

My dumb ass will definitely be back next week to see what the final season of Game Of Thrones becomes. I only hope that it keeps this same drama, tension, and Bran-staring that this first episode has.