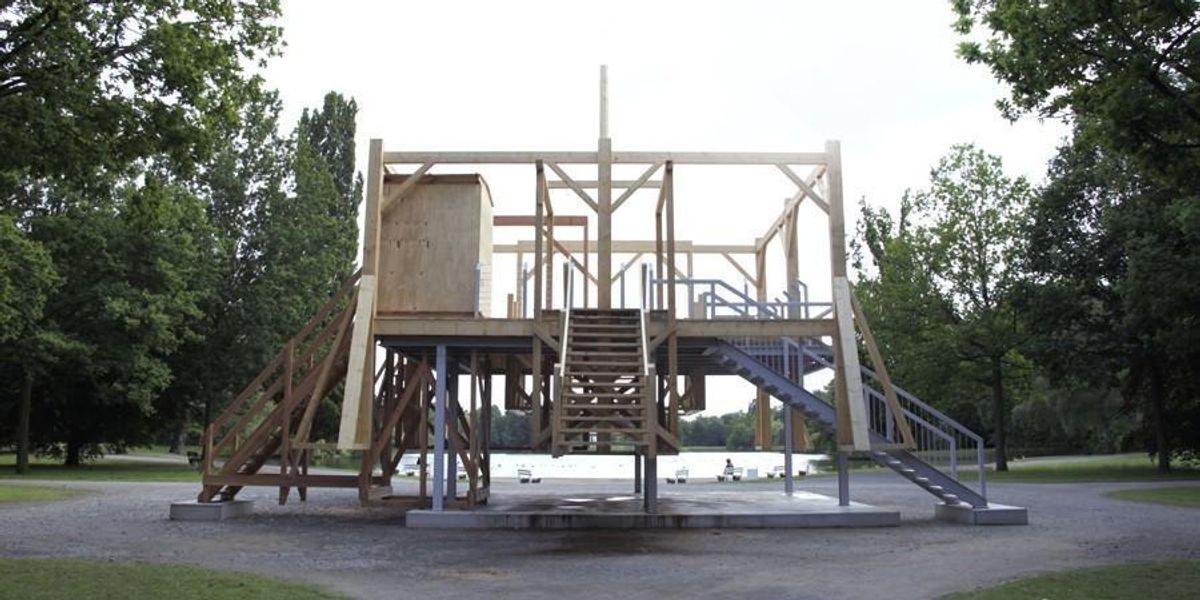 A sculpture made to look like an old-fashioned gallows by artist Sam Durant, set to be unveiled at the Walker Art Center in Minnesota this summer, is being furiously protested by the Native American Dakota community in the nearby town of Mankato.

Scaffold, first shown at Documenta 13 in Kassel, Germany in 2012, is a large wooden structure inspired by the gallows used in seven famous executions in American history, including the hangings of abolitionist leader John Brown in 1859 and Iraqi president Saddam Hussein in 2006. The gallows also resemble those used in the U.S.'s largest mass execution in 1862 during which 38 Dakota Indians were killed in Mankato.

The work was meant to displayed at the Center's Minneapolis Sculpture Garden alongside other large scale (but more whimsical) pieces. Protests against the work began almost immediately, with demonstrators airing their grievances both in person and online.

"It's really traumatizing for our people to look at that and have it just appear without any warning or idea that they were doing this. And it's not art to us," Dakota protestor Sasha Houston Brown told the StarTribune.


Dakota activist Graci Horne posted a letter on Facebook saying, "In Minnesota today, the legacy of the white, male monopoly over the historiography of the Dakota War lives on." She went on to give guidelines to Dakota protestors and their allies on how to demonstrate peacefully, and wrote that, "The Elders have requested a time to sit down the Director Olga Viso in the next few days."

"We recognize the decision to exhibit this work might cause some to question the Walker's sensitivity to Native audiences and audiences in Minnesota more familiar with this dark history," Viso wrote. "I regret that I did not better anticipate how the work would be received in Minnesota, especially by Native audiences. I should have engaged leaders in the Dakota and broader Native communities in advance of the work's siting, and I apologize for any pain and disappointment that the sculpture might elicit. When I first encountered Scaffold in a sculpture park in Europe five years ago, I saw a potent artistic statement about the ethics of capital punishment. Most importantly, I recognized its capacity to address the buried histories of violence in this country, in particular raising needed awareness among white audiences."

A statement from Viso on the Center's Facebook page indicated that they would be willing to remove the sculpture in response to the outcry.

"I am in agreement with the artist that the best way to move forward is to have Scaffold dismantled in some manner and to listen and learn from the Elders," Viso wrote. "The details of how and when will be determined by Traditional Spiritual Dakota Elders at a meeting scheduled with the Walker and the artist on Wednesday, May 31 with the support of a mediator selected by the Elders. This is the first step in a long process of healing."

The artist, Sam Durant, released his own statement yesterday on the Center's blog page apologizing for insensitivity and explaining the meaning behind the structure. "I offer my deepest apologies for my thoughtlessness," wrote. "I should have reached out to the Dakota community the moment I knew that the sculpture would be exhibited at the Walker Art Center in proximity to Mankato."

"I made Scaffold as a learning space for people like me, white people who have not suffered the effects of a white supremacist society and who may not consciously know that it exists," he continued. "It has been my belief that white artists need to address issues of white supremacy and its institutional manifestations. Whites created the concept of race and have used it to maintain dominance for centuries, whites must be involved in its dismantling. However, your protests have shown me that I made a grave miscalculation in how my work can be received by those in a particular community. In focusing on my position as a white artist making work for that audience I failed to understand what the inclusion of the Dakota 38 in the sculpture could mean for Dakota people."

A private mediation with a group of Dakota Elders is planned for tomorrow, May 31st, with leaders from the Walker Art Center, Minneapolis Park and Recreation Board, City of Minneapolis, and Sam Durant.