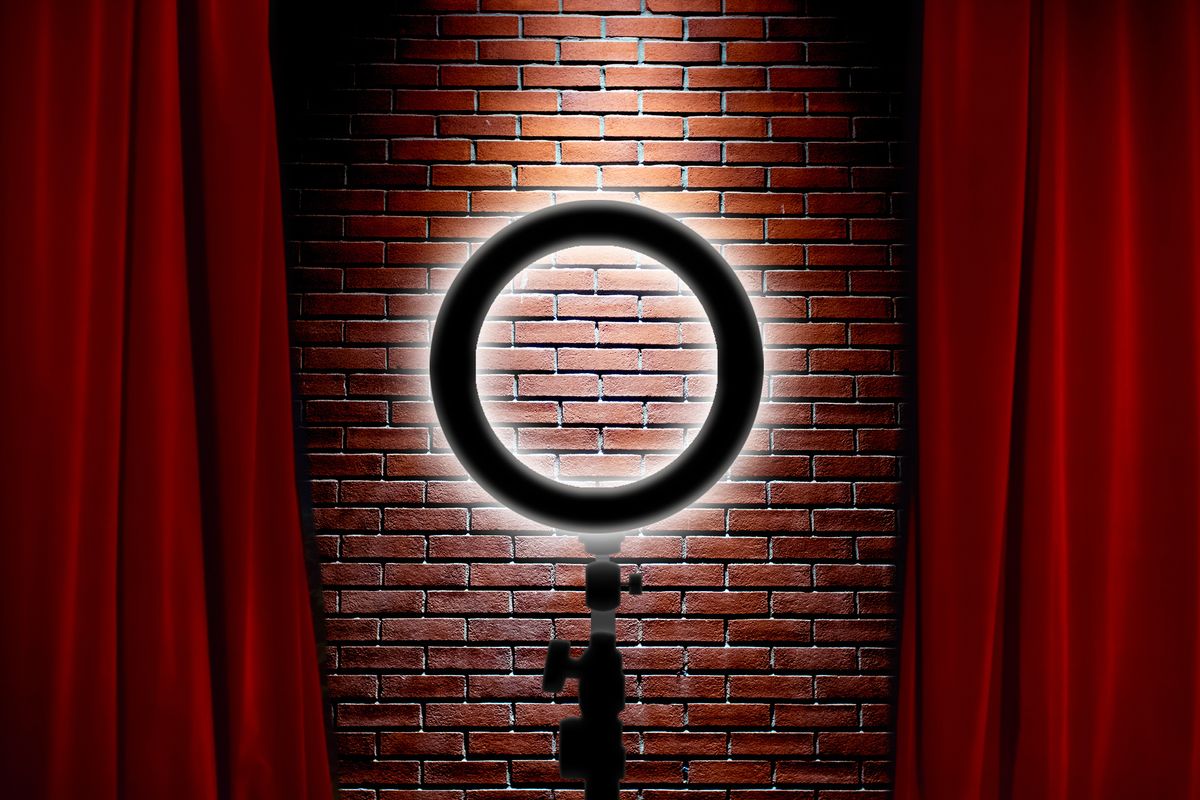 Tell anyone you're a comedian, and you can easily predict the next sentence out of their mouth: "So tell me a joke." My go-to response, "Oh, I normally get paid for that," has earned me my fair share of dirty looks. But that is the joke. I almost never get paid for my work. And I'm certainly not the only one.

It's something you expect when you decide to pursue a comedy career. You'll do endless open mics, get stage time at hundreds of bar shows, write dozens of sketches, fire off countless tweets into the void — all for zero dollars, hoping someone will notice just how uniquely hilarious you are and give you a paying gig: a sketch on Comedy Central's digital platform, a place in a TV writer's room, an HBO stand up special?

"One time I had a small benign tumor removed from my neck and on the train ride home, I realized I could make the 6 o'clock open mic. So I did," Diego Lopez, a standup comic based in NYC, tells me. It's the grind.

Now, comedy club open mics have disappeared — and maybe not just temporarily. As venues are forced to close permanently and the economy enters a recession, live shows are likely canceled for longer than we anticipate, even the outdoor ones. What comedy will look like in a few years is suddenly unclear, and comics, who are now extra not making any money, are faced with a conundrum: quietly ride out these improbable times and hope for the best when they can get back on stage again, or find a new way to get back to that grind. Savvy comics are using this time to re-imagine their careers digitally, and the next few months and years will drastically re-shape an industry that was already in a state of flux.

Related | Less Than a Minute on Zoom: Jordan Firstman and Lauren Servideo

Previous generations of comics had few paths to stardom. Getting your foot in the proverbial door meant moving to the right city (New York, Chicago, LA) and knowing the right people.Improv and sketch houses like Second City, The PIT and, most famously, UCB, became meccas. Getting picked for the house team could make your career — just ask Donald Glover, Aubrey Plaza or Sasheer Zamata, to name a few big names who got started this way. The stages at those currently-defunct theaters were the entire platforms of many, and one of the only proven ways to move up in the comedy world. But competition was tough, classes weren't cheap (an understatement), and climbing the ladder came with sacrifices.

Despite being the main reason for their success, those performers did not reap any of the immediate financial benefits of being on those stages. In the unlikely instance that you were picked for a house team, after paying for months if not years of classes, you'd continue to pay: for coaches, directors, sometimes even props. Comics were putting money into a pipe dream machine that had no guarantee of giving them anything in return, except a depressing glimpse of how the industry at large tends to work. With the exception of those very few who become household names, comics have always been by and large shafted when it comes to getting compensated for their art.

In recent years though, especially as whispers about UCB pyramid schemes grow louder, comedians have taken to social media to exhibit their comedic aptitude, choosing to bypass the standard (non-paying) paths to comedy success in favor of taking their own (also non-paying) routes.

Related | For Mitra Jouhari and Vagabon, Bravo Is Part of the Process

"I've had nights where I've rushed from a mic in Greenpoint to a seven minute spot in Bushwick to a five minute spot in another part of Brooklyn, losing money on Ubers along the way, for what was ultimately 15 minutes of stage time total," Jenny Gorelick, a standup comic and comedy show producer, recalls. "As a comedy producer, whenever possible, I try to pay comedians, and in some cases, it has been at a loss to myself."

From smaller, niche comedy accounts like Holmes Holmes and Rajat (pouring one out for his Twitter-banned counterpart Jeremy), to internet darlings like Eva Victor, Caleb Hearon, and Alyssa Limperis, to those who have translated success on social media to a successful career IRL like Sarah Cooper, being Extremely Online™ has paid off for a new generation of comedy performers (honorable mentions for Ziwe's weekly Instagram Live show, Jordan Firstman's impressions clips, and Grace Kuhlenschmidt's general unhingedness). Their success is being escalated under lockdown: not only are we all desperate to laugh right now, but we're also stuck inside, glued to our feeds. COVID-19 has legitimized lo-fi internet comedy: even SNL is doing Zoom sketches now, and big names are going live on Instagram for charity.

The meteoric rise of social media comedy content, be it tweets, sketches, or front-facing camera videos, presents a new and theoretically utopian model for what an early career in the entertainment industry could look like. In some ways, they mimic open mic nights and sketch clubs: there's immediate audience feedback, it's easy to test shaky material by uploading it onto a feed that will have refreshed itself completely within hours, and if something doesn't work, there's always the delete button (looking at you, Jaboukie).

Social media form does favor a certain type of young, internet-savvy comedian. Not everyone's sense of humor fits into 280 characters; some comics embrace a physicality much more suited to the stage. But compared to many traditional avenues, online comedy is a much more level field for new players, elevating the comedic voices and perspectives of those who have historically been systematically excluded from the industry. As teens on Vine and TikTok have demonstrated, you don't even have to be based in a major city anymore to break through.

The bad news? While social media is great for building a brand or even catching the attention of TV and movie execs (Twitter fans are constantly begging @Netflix to give Megan Stalter her own show, and you can bet that some of your TikTok faves are inking Hollywood deals right now, even in quarantine), it doesn't exactly solve the money issue. Unless they're getting employed to make memes for corporations, comedians aren't getting paid for their tweets.

It's not like the market hasn't noticed how popular digital comedy has become. Twitter, Tik Tok, and Instagram appear very aware of how valuable comedians are to their platforms. Quibi infamously raised close to $2 billion for their app,which highlights short video clips of digital shows, many of them featuring relatively unknown comics. Unfortunately, no one is willing to pay for a service they can get for free elsewhere. Sponsored posts aside, social media may never be monetizable for comedians, although podcasting platforms and fan shout-out services like Cameo can be lucrative while allowing performers at least some control over the means of production.

If the next iteration of the comedy industry finally gives the little guy a chance to showcase their talent, will those little guys maintain the same control of their work, and perhaps most importantly, the same compensation as their bigger counterparts? Is it possible for a model based around uplifting small, original creators to be individually profitable in the future if comedians pre-pandemic were still striving to receive a base-level of respect and ownership rights?

That remains to be seen. Unfortunately, the internet has always had hazy ideas about intellectual property. Taking jokes from social media accounts and posting them as your own is a common practice, even endorsed by some of those with huge followings. Content aggregators and meme accounts like FuckJerry boast millions of followers, selling sponsored posts by screenshotting and reposting original jokes, tweets and videos from independent comedians. Even household name comedians, from Dave Chappelle to Pete Davidson, have to take steps to avoid their standup jokes being leaked to an audience who didn't pay to hear them. And while grassroots movements formed around ensuring that original comedy content is taken seriously (so to speak) have seen some success, a post-COVID 19 comedy industry, one that is upheld by the comedy commoner, has to take major steps to keep that goal in its sights.

One thing we do know is that comedy's not going anywhere. "People still want to laugh — and I think they need it more than ever — so the show must go on(line)," says Rebecca O'Neal, a standup comic originally from Chicago but now based (and quarantined) in NYC.

So post-pandemic, let's see this as an opportunity to rebuild thoughtfully. The economic impacts of coronavirus are severe and have left a deluge of questions about the future of many industries in its wake. But when it comes to the comedy world, maybe such dramatic and abrupt change isn't all bad. We will survive this, and not every industry can say the same right now. Writer's rooms are moving to Zoom, stand up stages have gone digital and original comedy creators are still original comedy creating. Now that the internet has been legitimized as a medium for sharing our craft, more of us have a platform to do that than ever. A global pandemic doesn't have to mean the end of comedy. In fact, it could mean that a new wave of comedy talent is just about to break.

Deeply sorry about the whole ocean metaphor I had going on there.