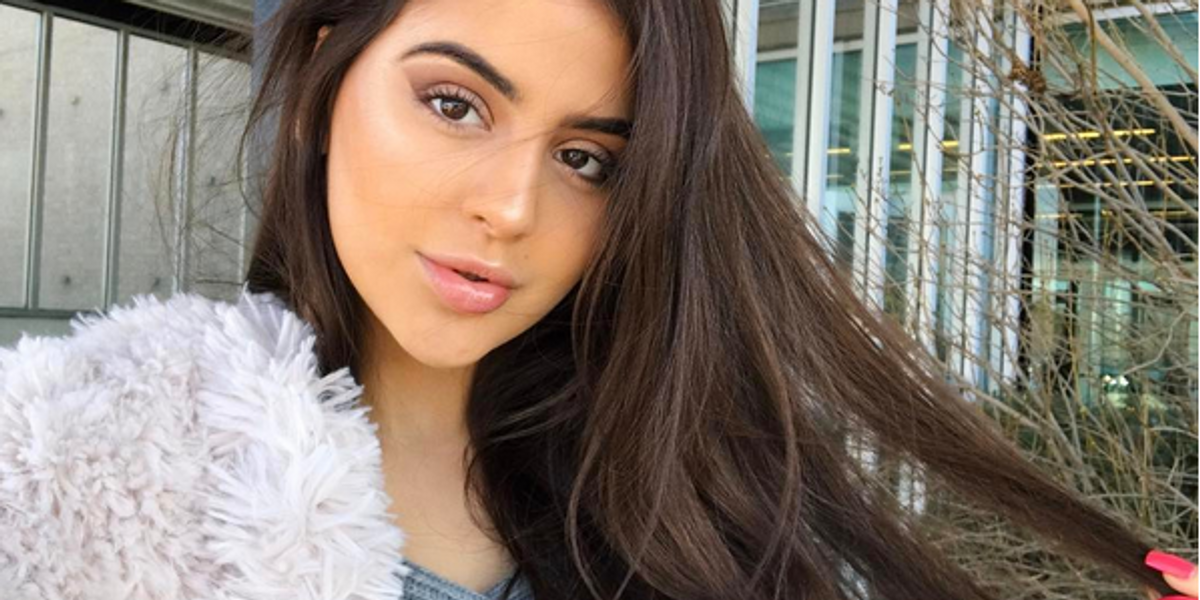 Lauren Giraldo has always had the kind of personality people flock towards. The 19-year-old acquired internet fame at an early age via Vine, posting hilarious 6-second videos that highlighted her youthful fearlessness. She soon found herself with a loyal following across platforms, and now that she's a little older, the ability to translate that fame into a successful acting and music career. She's currently working on a debut EP, but when she's not in the studio, you can catch her spreading feminist doctrine via her Fullscreen short-form video program Lady Bits and starring in indie flicks like Hope Springs Eternal.

We called Giraldo to talk about growing up in the public eye, growing a thick skin, and learning to shut down slut-shamers.

I was the only one in my entire school who wasn't allowed to have any social media. I remember everyone talking about Instagram and I couldn't have one because of my parents. I eventually made social media accounts without them knowing about it and, accidentally, they got really big. The cat was out of the bag.

I started posting funny videos on Vine. It got a lot bigger than I was expecting it to get. When I first got social media, it was to talk to my friends and post pictures for them and my family to see. Having a bunch of people follow me was different and weird and it's now something I love so much.

How old were you when you started on Vine?

It was the first platform that I went on. I was 15. Because of the experience I had on Vine, having an audience, I started speaking to people everyday. Now I go on Snapchat everyday and say, "Hey guys!" and talk about my day. Before I would've never done that. With Twitter as well, I tweet things I wouldn't necessarily just tell my friends—I know how to do it now.

How did your platform start to grow?

Through that I started on YouTube, posting a bunch of covers and on my Instagram as well—I've started doing what I really want to do on the internet. It's given me the opportunity to move to L.A. and live as an adult, which is so weird. Indirectly a lot of things in my life have happened because of it. I was thrown into this adult world. I've dealt which a lot of issues that I probably wouldn't have had to deal with if I just went to college, a lot criticism on the things that I wear and the things that I do in general, a lot of inequality in the work place that I probably wouldn't have been affected by [in the same way].

I have a voice now, and that's one of the things I'm most thankful for. I have a platform to talk about what's important. I do a show called Lady Bits where I talk about feminism, things that have happened to me and things that have happened to my friends. We have social double standards that some of us choose to accept and say "That's life!" I want to use my platform and my voice and be defiant. If I hadn't gotten big on the Internet I wouldn't have been able to speak to as many people about what I'm passionate about.

Have you always felt the responsibility to use your platform for important dialogue?

I've dealt with so many inequalities in childhood. I remember being told, "Don't wear that, you're going to look like a whore!" or "You're such a slut, you kissed a boy," and if a boy kissed a girl it wouldn't matter. Moving to L.A., I dated this guy that was 26 and he was like, "My wife will never work. She'll just stay home with the family." I was like, "That's a real big reach for you, you're 26 and living off your parents' money and I work every single day." Being a Latina, it's so much different from being a white guy. My whole life, I would always question everything. I'd call my parents out, ask "Why is this happening?"

When I was 15 or 16, my nude photos leaked on the internet. Because it was me, it went viral. I was at the MTV Music Video Awards and it was the number one trend on Twitter above the performances, above everything else. Through that experience, I learned a lot. As much as it did suck, I learned to question it. If I'm a minor and my photos are being distributed without my consent, that's not on me. Everyone distributing that photo was the one doing something wrong. Learning those hard lessons in life through having a lot of eyeballs on you made me want to speak on it; that was one of the reasons I wanted to do Lady Bits. For millennials and people my age I felt that there was nothing at the time, no one for me to look to directly and say "She gets it. She understands what I'm saying." That's why I wanted to do it.

Have you developed a thick skin because of your fame?

I just got off tour and a lot of girls would come up to me after the show and say, "You changed my life. Your message means so much to me." It's one thing to read it on the computer, to have it in your face is really cool.

What advice do you offer those girls?

My main message is, "If it feels right, it is right." It sounds really cliché and corny but it goes back to chasing your passions and not really giving a fuck about societal standards and all that stupid shit some people allow themselves to live by.

When I first got in the studio I was nervous to write about something too out there because I'm a girl and I'm young and I didn't want to be perceived as something negative. I grew up watching people like Miley Cyrus get slammed because she was singing about what she wanted. I grew up watching Ariana Grande make the transition from acting to singing while I was coming to a transition—I'm going through a transition and will release my own music. It was disheartening to watch her make this change and have people say, "She looks like a 12-year-old, she shouldn't be singing about sex." Those things were intimidating to me as I'm in the studio. "Should I write about sex? Are people going to drag me?" Then again, fuck it. If it feels right, it is right.

When did you start seriously pursuing music?

I grew up doing musical theater and I loved it. I was Annie. The second that I got big on the internet I was in the studio with huge producers, working on music. This was years ago, making music that didn't really feel right to me. Now it feels like I'm at a point where I'm old enough and I know what music I want to make. I'm working with the perfect producer. I have one song out and I love it so much. I can honestly say I love everything I'm doing career-wise right now.

You mean the single, "Only Lovers."

I wrote "Only Lovers" and I was apprehensive to release it because it was about this guy I was sleeping with again and again and again ,and it got to this point that we weren't just fucking, we were going on dates and we were calling each other "babe." I was so confused because we were doing the things that only lovers would do. At the end of the day we didn't have titles and I was so frustrated and that's what that song is about.

What's in store for the future?

I'm releasing a new song soon. Without giving too much away, it's about being really into someone who is way too old for you. At first I was terrified to write about that but then I'd think about the Weeknd and Drake and all the male artists and rappers who sing about that shit all the time and it's totally accepted. If they can do it, I'm going to.

You're so busy! Do you ever have downtime?

If you don't have a social life, what are you going to write songs about? You're going to write about how busy you are and how emotionally unavailable you are? I will always make sure I have time to hang out with my very open-minded, chill, cool friends. We hang out so much we'll say the same things at the same time. It's almost creepy. They complain that I work too much but, like, whatever.

I love Hey Violet. In Chicago at the venue I preformed at I was looking at the posters and they were at the same venue a week after. I was like, "Fuck!" I love them so much.