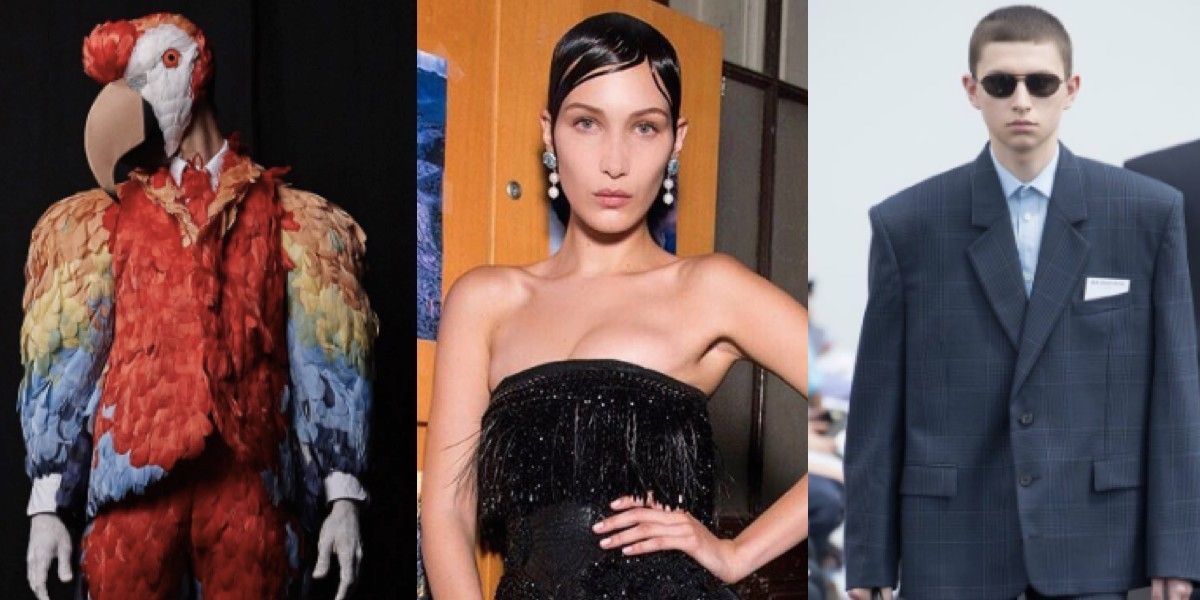 From Birds to Broad Shoulders: Ten Highlights From the European Men's Shows

While the couture shows are getting ready in Paris, and New York gears up for its menswear week, the European menswear collections wrapped as of Sunday in Paris. Here are some of the highlights, from birds on the brain at Thom Browne, to the crazy coifs at Comme des Garcons, to a surprise Hadid at Givenchy, and everything in between.


After showing a breathtakingly elegant spring collection earlier in the week, Grace Wales Bonner was announced as the winner of the 2016 LVMH Prize, further cementing her position as the most promising designer in the current London crop.

Raf Simons, in collaboration with the Robert Mapplethorpe Foundation, printed some of the photographer's most memorable images on shirts and tunics to brilliantly emotional effect. Pure (collectible) poetry.

#rafsimons presents an artistic SS17 #PittiUomo. A strong collection is has to be pointed out. pic.twitter.com/Bn4xw4LPZg
— ROUGH GLOBAL (@ROUGHofficial) June 19, 2016

As ever there was much to read into Miuccia Prada's idea of modern man: Was it a comment on the migration crisis roiling the European Union or simply a cerebral take on nylon? Whatever your view, there is no question your desire for billowy synthetics will reach new heights come next spring.

You Are Still In The Running Towards Becoming….

Nyle DiMarco strutting down a catwalk in for Armani in a t-shirt with Giorgio himself's face on it: Need we say more?

In a Valentino collection heavy on camo and denim, the real story of the show was it would be the last men's outing for Maria Grazia Chiuri, who designed with Pierpaolo Piccioli, when news leaked shortly after the final look of her appointment as Creative Director of Dior.

The wild tresses at Comme des Garçons Homme Plus, meant to resemble crowns from the fairy tale "The Emperor's New Clothes," were romantic, brutal, and a high point, so to speak, of the Paris season.

The strangeness of the fashion calendar is most clear during the mens seasons, when designers throw in their pre-collection women's offerings on the mens runway--or in Riccardo Tisci's case, just some chill couture on Kendall Jenner and Bella Hadid. You know, for fun!

All eyes were on Demna Gvasalia for his menswear debut at the storied house of Balenciaga. The David Bryne-esque exaggerated shoulders may not work for your office grind, but make no mistake, Demna means business.

One doesn't often expect to see Miss Moss at the menswear shows, least of all with a buzzy new beau (Count Nikolai Von Bismarck) as she did at this season's Louis Vuitton men's collection. Its hard to out shine David Beckham, who was also in attendance, but if anyone can it's Kate the Great.


Birds of a Feather


In a lighthearted, yet equally macabre, end to the European collections, Thom Browne took the beleaguered fashion flock to the beach, complete with circling gulls and parrots. The designer also observed a moment of silence for Bill Cunningham, the legendary photographer, who had passed away the day before. A fitting gesture for a man who would who delighted in the colorful theatrics of fashion.