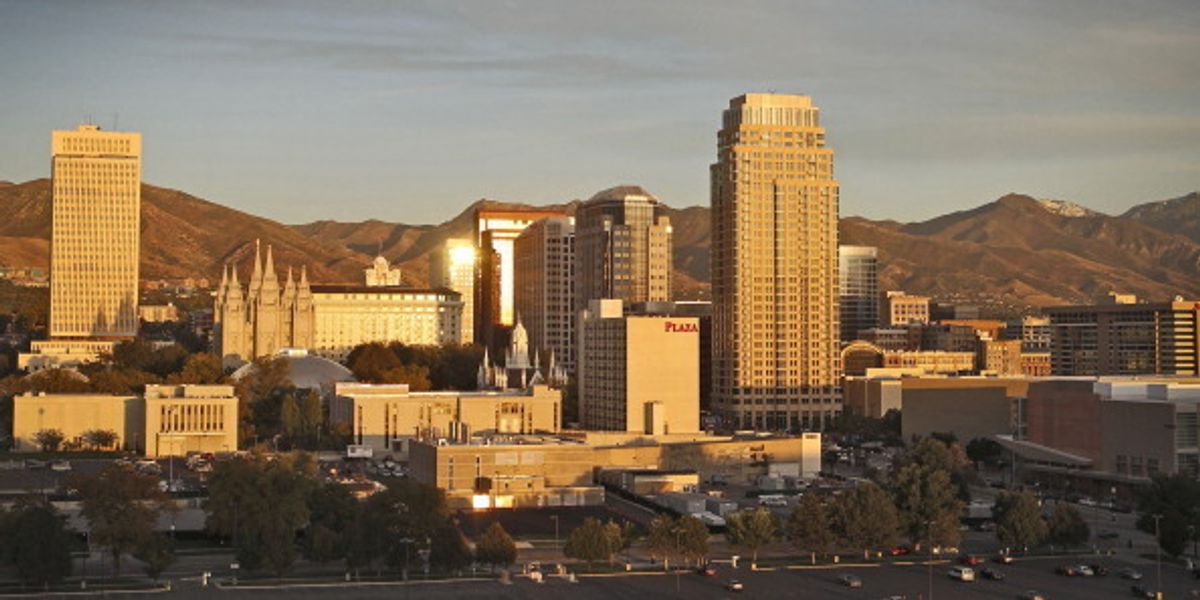 From a Farmer's Market to Roller Derby, The Ideal Weekend In Salt Lake City

Nestled in the heart of the west, it comes as a surprise when visitors learn that the major city in a red state, and the center of the Mormon church, is also the center of a vibrant LGBTQ life. Regularly voted by the Advocate as one of America's queerest cities, Salt Lake's ever-growing LGBTQ community has upended the perception of Utah as a heavily religious, across-the-board conservative region. In honor of June Pride, PAPER, in collaboration with American Express, rounds up how to take advantage of Salt Lake's LGBTQ scene and spend a weekend in Utah's capitol, from shopping for underwear to dance parties to strolling farmer's markets.

Start the weekend off with a slightly more laid back vibe at Club Try-Angles (251 W. 900th South), named this year's best Friday night by Q Salt Lake, the city's LGBTQ magazine. When they close the doors at 2 A.M., you can stop by Off-Trax right next door for a late-night snack.

Start the morning with a stroll through the Downtown Farmer's Market (Pioneer Park, 350 W. 300 S). Opening at 8 A.M., the market features stalls for local farmers, as well as prepared foods from companies like Laziz Foods, and a variety of trucks. It also houses an arts and crafts market at the same time, selling ceramics, jewelry, textiles and other handcrafts.

If you're a fan of midcentury modern style, head over to Now & Again (207 E. Broadway) to peruse Michael Sanders' stock of vintage furniture, home goods and clothing.

Take an afternoon break to chill out for a bit. If you're looking for a beer or a cocktail in a mason jar, head over to Sun Trapp (102 South 600 W.). The bar (whose name honors two since-departed gay bars) has a large patio just meant for leisurely summer day drinking.

For dinner, head over to Meditrina (1394 South West Temple). Owned by a lesbian couple, the tapas-style joint has been a Salt Lake staple since it opened in 2009, thanks to shareable small plates and a nice wine list.

After you eat, it's off to Club Jam (751 N. 300 West) to dance your face off and admire the bartenders, both for their looks and their mixology skills.

Head to Penny Ann's (1810 South Main St.) for breakfast, and try out the universally lauded "heavenly hot cakes" at this east coast-style diner.

After breakfast, clotheshorses can drop by Spark (650 East 500 St.) to browse the boutique's unique collection of clothes. Word on the street is that, while all their stock is unique and interesting, their underwear offerings in particular are superb.

For a little sportier activity, check out if the Wasatch Roller Derby at the Derby Depot (1415 S. 700) is on. Weekends throughout the summer, Salt Lake City's toughest ladies will be blocking, jamming, and skating in thrilling competitions, sometimes with multiple bouts throughout the day.

As your weekend is winding down, cap it off with dinner at Mazza (912 E. 900 South). The Middle Eastern cafe consistently racks up praise and "Best of" awards for their authentic, flavorful takes on everything from the ubiquitous falafel to options like maghmoor and rice.

Photo by Bloomberg/Contributor, from Getty Images.