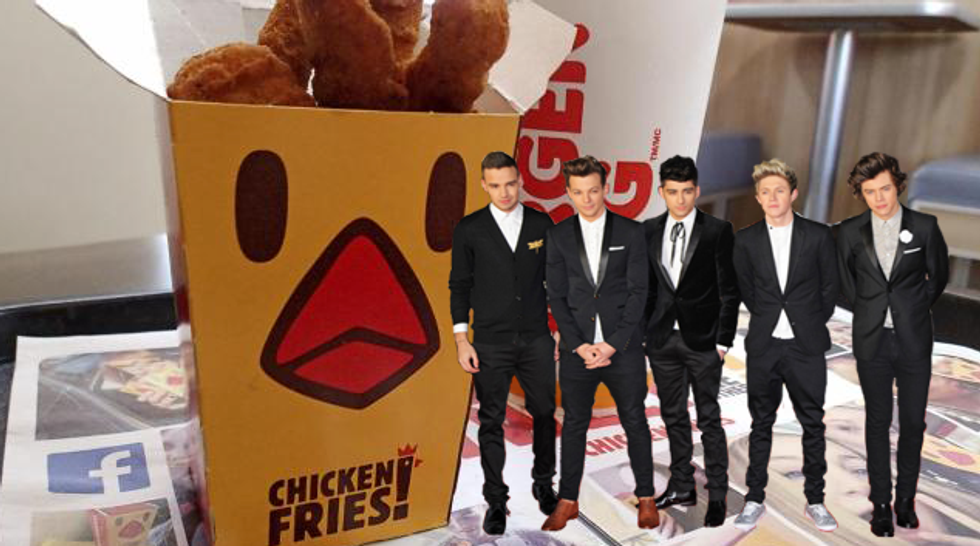 Friday Superlatives: The Best, Worst And Weirdest Of The Week

by Paper
PAPERMAG
<br/><br/><b>Best Tribute on a Speedboat: </b>The death of beloved veteran Brooklyn rapper Sean Price has prompted an outpouring of support and remembrance, but none quite like this video posted by the elusive MF DOOM, in which the rapper appears to be almost literally sailing off into the sunset. <b>-- Eric Thurm<br/><br/></b> <iframe allowfullscreen="true" marginheight="0" marginwidth="0" id="nyt_video_player" title="New York Times Video - Embed Player" src="http://graphics8.nytimes.com/bcvideo/1.0/iframe/embed.html?videoId=100000003846021&playerType=embed" frameborder="0" height="400" scrolling="no" width="600"/> <br/><b><br/>Best New Activity for NYC Stoners</b>: Riding the adorable, otherworldly new SeaGlass Carousel that opens to the public August 20th at Battery Park. So many colors, so many shimmering rays of light.....so many huge 12-foot-fish to loom over you while you're tripping the undersea light fantastic and send you into an irreversible paranoid freak-out spiral. Actually, maybe this is a bad idea. Watch the <i>Times</i>' <a href="http://www.nytimes.com/2015/08/14/arts/design/new-yorks-new-carousel-puts-you-in-a-whirling-school-of-mechanized-fish.html?_r=0">rhapsodic video</a> above.--<b>Elizabeth Thompson</b><br/><br/><b>Best Writing on Kim Kardashian and Contouring, Ever:</b> <a href="http://www.papermag.com/2014/11/arabelle_sicardi.php">Arabelle Sicardi'</a>s <a href="http://www.racked.com/2015/8/10/9117195/kim-kardashian-mario-dedivanovic-contouring-secrets">Racked.com piece</a> "I Attended a 50-Step Contouring Class With Kim Kardashan West." Sicardi sat-in on a dizzying, $300 Kardashian "makeup masterclass" with longtime KKW makeup artist Mario Dedivanovic, who practiced his technique on <a href="http://www.papermag.com/2014/11/kim_kardashian.php">our favorite cover girl</a> in front of a room of eager pupils. Per Sicardi, Kardashian-West's multi-mascara, multi-concealer, multi-multi-multi-step beauty process is born not from mere vanity but, "out of necessity from the lack of chill around her, and in desire to be the best at what she does: being a celebrity version of Any (Beautiful) Girl, a sweet woman of the cellulose. A living, celebrity, cyborg ghost -- her video game self is as real and as malleable as her human body, she curates both selves with a certain amount of freedom and control." Read <a href="http://www.racked.com/2015/8/10/9117195/kim-kardashian-mario-dedivanovic-contouring-secretshttp://">the whole excellent thing</a> here. --<b>Elizabeth Thompson</b><br/><br/><b>Worst Political Attempt at "Getting" the Internet:</b> Hillary Clinton's campaign attempted to use "cool" things like "emojis" to talk about a very serious issue -- student loan debt, asking people on social media to respond by describing their feelins in "3 emojis or less." It was pretty tone-deaf on multiple levels, but especially because the campaign didn't ask respondents to use <a href="http://www.papermag.com/2014/09/rapper_lil_b_released_a_comple.php">based emoji</a>, which is maybe why Clinton lost <a href="http://www.papermag.com/2015/08/lil_b_endorses_bernie_sanders.php">Lil B's crucial endorsement</a>. <b>-- E.T.</b><br/><br/><blockquote class="twitter-tweet" lang="en"><p dir="ltr" lang="en">How does your student loan debt make you feel? Tell us in 3 emojis or less.</p>-- Hillary Clinton (@HillaryClinton) <a href="https://twitter.com/HillaryClinton/status/631538115514007553">August 12, 2015</a><br/><br/><br/></blockquote><script async="" src="//platform.twitter.com/widgets.js" charset="utf-8"/> <b>Best Music-to-TV Adaptation News: </b>In addition to this week's exciting news that Patti Smith's wonderful memoir<i> Just Kids</i> <a href="http://www.papermag.com/2015/08/just_kids_patti_smith_memoir_showtime.php">will be adapted by her for Showtime</a>, we're also not mad at NBC's announcement that Dolly Parton's "Jolene" <a href="http://uproxx.com/music/2015/08/dolly-parton-jolene-nbc-tv-movie/">will be made into a made-for-TV movie</a>. THINK OF THE WIGS AND THE EYE MAKEUP. Camp bliss.<b> --Elizabeth Thompson  <br/><br/>Least Bad Response to the <i>Sesame Street</i>-HBO News:</b> Most of the jokes about <a href="http://www.papermag.com/2015/08/sesame_street_is_coming_to_hbo.php"><i>Sesame Street </i>moving to HBO</a> are bad, but generally good Twitter account <a href="https://twitter.com/seinfeld2000">@Seinfeld2000</a>'s was great because it managed to both mock the hackiness of the other jokes while conjuring up gross imagery about Grover. Congrats, everyone. <b>-- E.T.</b><br/><br/><blockquote class="twitter-tweet" lang="en"><p dir="ltr" lang="en">imagen if sesame street on HBO? Elmo rob barksdale stash house Daenerys ride Big Bird Grover give hannah horvath HPV Count on True Blood</p>-- Seinfeld Current Day (@Seinfeld2000) <a href="https://twitter.com/Seinfeld2000/status/631848404360925184">August 13, 2015</a></blockquote><script async="" src="//platform.twitter.com/widgets.js" charset="utf-8"/> <b>Sweetest Reaction to Obama's Vacation Playlist:</b> Will Sheff of Okkervil River, whose <a href="https://www.youtube.com/watch?v=7mjb0V9IgGI">"Down Down the Deep River"</a> appears on <a href="http://www.papermag.com/2015/08/obamas_vacation_playlist_is_pr.php">Obama's playlist</a>, is really excited about the whole thing. He told Paper: <br/><br/><blockquote>"The news about the President's playlist has made for a crazy day. Back when I was a broke video store employee trying to pressure my friends into coming out to my Monday night bar gig, I certainly never dreamed that the President of the United States would have my song in his ears at some point later in my life. Not only because that wasn't on my radar at all but because the world was different then -- there was still money in CDs, streaming services didn't exist, "indie rock" still felt like a mostly invisible micro-genre, and the President was supposed to stay at semi-remove from pop culture. We live in a different world now, of course. I have no idea how "Down Down the Deep River" found its way to the President. If I were being cynical I'd suspect there's someone whose job it is to shoot some jams his way. If I wanted to pay myself on the back about it I'd suspect that he likes the groove and the keyboard hook and he appreciates that there's a more complicated narrative on top. The fact that he chose that particular song has been kind of personally validating because it's one of my favorites - so much so that I've spent the last two years writing and directing an elaborate, expensive movie version of the film that we're just now setting up some screenings for. Maybe I should send him a DVD?"<br/></blockquote>That's really sweet. Congrats, Will. <b>-- E.T.</b><br/></div><div><br/></div>
You May Also Like
Pride