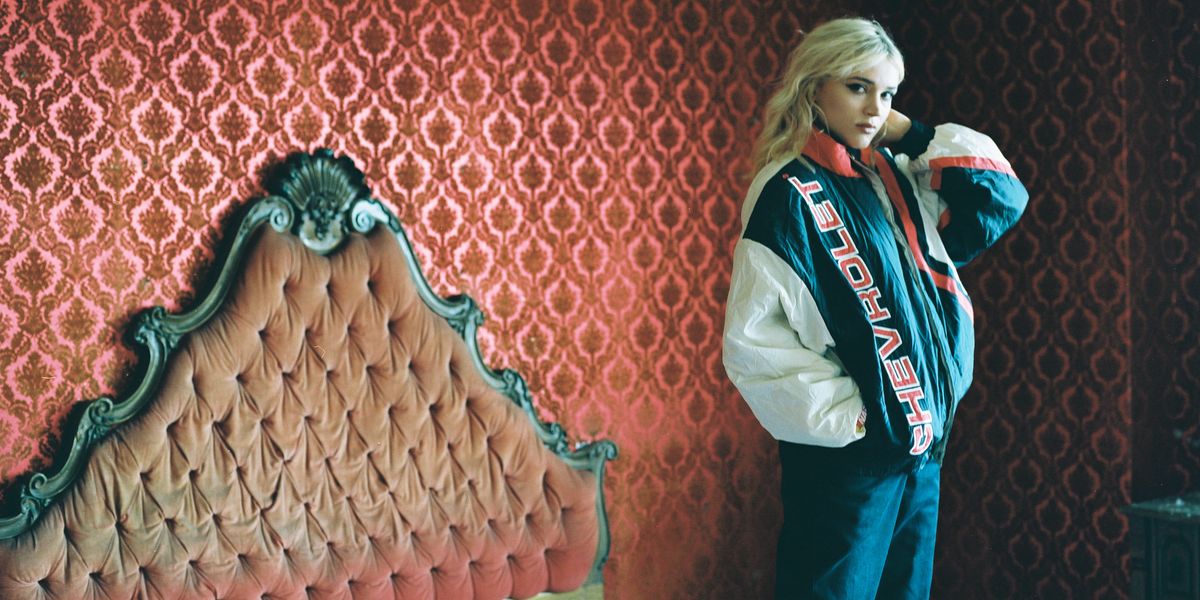 Lolo Zouaï is a global artist whose presence is bound to felt worldwide. The Paris-born, Bay Area-raised, and Brooklyn-dwelling singer-songwriter is of French-Algerian descent, and her multicultural background is accordingly reflected in her music. Her debut album High Highs and Low Lows is out today, and its 12 tracks are a delicious mix of roiling trap and R&B grooves, and sumptuous, radio-friendly melodies. This provides a rich palette for Zouaï's stories to come to life. On "Moi," she fully gets into character, flitting between catch-me-if-you-can seductress ( "I ride solo/ three passport photos") and high-class starlet ("My heart is on the road"). The results are intoxicating, as she sings in French and English over mixed tempos and chopped-and-screwed production. Zouaï understands the art of keeping audiences (and would-be suitors) on the edge of their seats, which is why when "Moi" is over in three minutes, repeating it and allowing it all to unravel again feels like the only viable option.

Lizzo's lead-up to her fifth studio album and major-label debut, Cuz I Love You, has been nothing short of rapturous. It's exciting to watch the growth of an artist who has been committed to shattering all kinds of paradigms — from what female pop stars are expected to look, act, and sound like to her tireless efforts to uplift people like her. The album is finally out and it's worth its weight in gold. "Like a Girl" is an immediate standout precisely because it a.) effectively reasserts Lizzo for the unapologetically free icon she is and b.) encourages femmes the world over to fully claim their preordained glory. Lizzo even wails like she means it, and it's powerful. When she visited PAPER's offices to play this song recently, she spoke about how important it is to recognize and celebrate femme power, no matter what form it comes in, because if you're paying attention, it's something all people have, regardless of gender identity. "Like a Girl," as only Lizzo can, playfully and poignantly imagines a future in which that phrase ceases to become an insult, and instead becomes a chant for equality, a motivator of nations to embrace divine feminine energy within. I'm all in my feelings with this one, most of all because I feel seen. Here's hoping you feel the same.

Related | No One Loves Us as Good as Lizzo

Potently channeling his heartache into a touching ode to lovers past is BROCKHAMPTON's, Kevin Abstract, who just released his Ghettobaby EP, the second installment of his ongoing ARIZONA baby project. (The third and final installment will arrive next week and will complete the release rollout.) Everyone will be talking about the dynamic "Baby Boy." The chorus is a singsong-y affectation of a lover through dreams; in waking moments it is easier for Kevin to pretend he's unaffected: "At this point you're pretty much out of my mind," he sings. But as the verses give way to psychedelic rock explosions, his truth joyfully, painfully emerges: "I'd rather you hold me, that's what you told me."

Carly Rae Jepsen's latest taste from her upcoming third album Dedicated is a funked-out groove about a fantastical love named "Julien." "I tried another to keep me satisfied, but all your colors are still dancing in my mind," she sings about the boy she can't forget. "I'm forever haunted by your time," she coos later. Our heroine is caught between two worlds, and it shows up best in the production: Jepsen's nostalgia for what was lies beneath a disco ball's faded glimmer, her present sense of absence captured by jarring synth squiggles. Her memory becomes our dancefloor ecstasy — a hallmark of Jepsen's greatness.

DJ Armin Van Buuren and frequent Lady Gaga collaborator Fernando Garibay team up for "Phone Down." The glimmering track effectively highlights the pair's undeniable production prowess; Garibay's work is best heard throughout Gaga's Born This Way. A male vocalist sings passionately over this track's bubbling, throbbing synthpop about an inability to be present in his lover's absence: a highly relatable experience for this generation. Swipe right if you can relate, which should be everyone reading and listening. Then, put your phone down and dance.

Electronic musician MNDR returns with an elegant break up ballad that calls on the distant planet of war, rage, and fire. But "Mars," though it is an immediate head-rush of swirling synths, beeps, and heavy-hitting beats — all enhanced by MNDR's distinctive voice — does not come from an angry place. She takes a slightly more detached perspective, exiting a relationship and floating through the galaxy with a tone of calm acceptance. "Interest drifts away," she sings, as if through a smokescreen. On "Mars," she's processing her own ache, while remaining protected from the emotional fallout of leaving someone behind on Earth. The gorgeous new track comes from Young Art Sound II, a project slated for a May 3 released on the TOKiMONSTA-backed label Young Art Records. Don't let this one drift away.

Related | Women Are Writing Today's Biggest Hits. Meet 15 of Them.

Haunted songstress Morgan Saint's newest song "god bless our souls" is a minimal ballad about a dark and stormy love and affair. Saint's voice hovers just above a ghostly, black-tongued falsetto, and is the prickly needle through which contrasting threads fit. She plays musical seamstress weaving a darkened tapestry through barbed lyrics: "Am I enough?" turns sharply to "Will I end up dead?" and "Don't wanna blame you, you're an angel" builds to "but you make me want to die." While it remains unclear if Saint is seeking salvation or the end, the song's melodramatic edge and twisty melodies are what truly sell it.

Folk-pop experimentalist Kelsey Lu's debut album Blood is here, and while we're going to take our time absorbing its immense, orchestral grandness, here is "Rebel." Over sweeping strings, Lu sings about an outsider and hustler who hasn't found home. Her voice floats elegantly just beyond reach, narrating her character's history of disappointment. "Times have never really changed/ yet they always stay the same," she sighs. The track is not only an offering from a wildly important emerging voice, but it's romanticaly poetic, as if birthed from the gods of folk music past. Kelsey Lu is their modern-day channel, and in a landscape where dozens of pop-styled artists are indistinguishable, her voice and lyrics divinely stand apart.

Jade Bird's self-titled debut is out now, and it heralds a big-voiced talent who is not afraid of her power. Her music features no shortage of fiery rock riffs and spirited punk-pop energy, and "Uh Huh" is a great example of it. It's cranked-up loud, brutally honest and skewers stereotypes of post-breakup processing. Bird sneers at an ex who gets with someone new. Things aren't working out, she can see that; unfortunately, they can't. "Getting you where it hurts," she shrugs. Bird sings with the kind of magnetic self-assuredness of a woman who knows that her unlucky ex missed out on a good thing. It's this attitude that continues to make us believe that Bird, who is hitting the road with Father John Misty and Jason Isbell in June, will be impossible to turn away from.

Aaron Aye continues to blaze the path toward his future with "Roots," his first bit of new music so far this year. Still building his career and swiftly-rising, the LA artist sings and raps like A-list talent you already know and love (Drake, J. Cole). In "Roots," Aye looks back at his struggles and process ("Started with a pen and the keys on a Yamaha") as a means of leaping forward into success. (See the nostalgic video here, which pays homage to the Minneapolis he grew up in.) In the process, he finds a way to encourage others pursuing their dreams: "You can get through anything, I'm the living proof/ Trust me I know it feels/What it's like to lose." Aye might be earnest, but he's impossible not to root for.