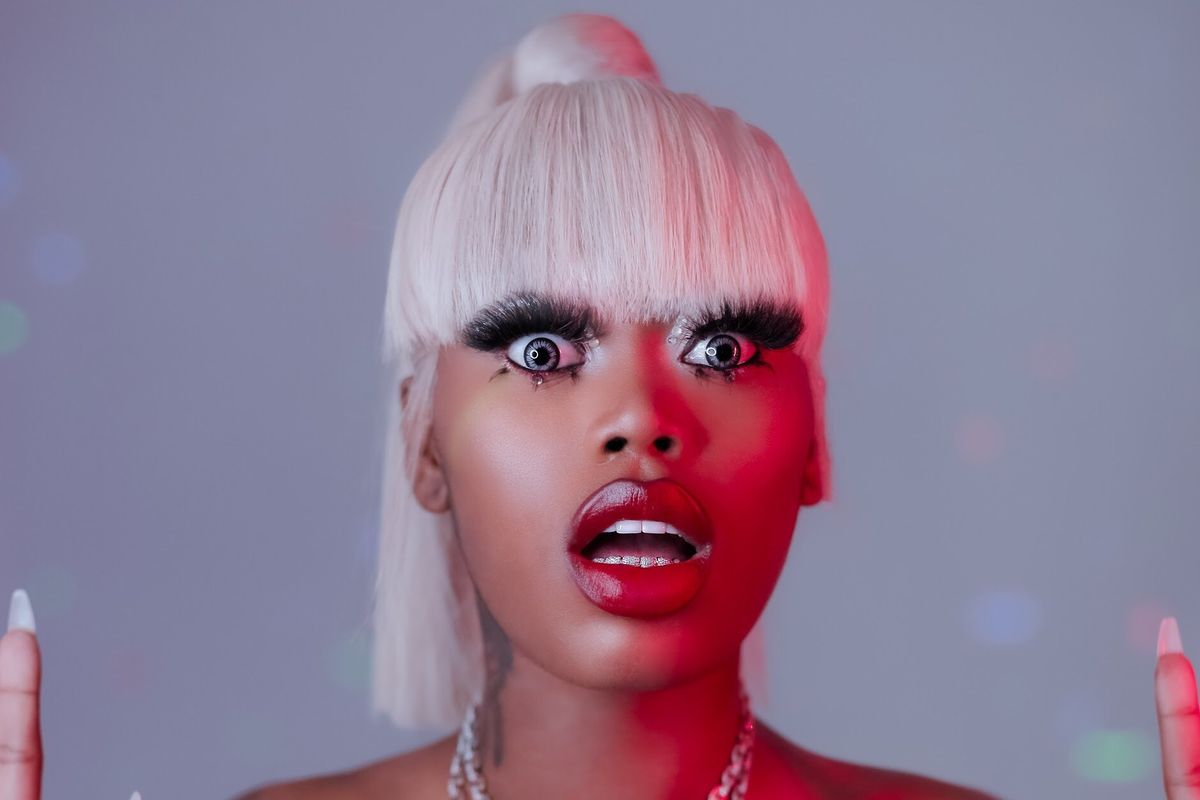 Asian Da Brat's newest album, Unfuccwitable, arrives May 3, and it's the first taste we get of the artist formerly known as Asian Doll's new vision. "Draco" is here to kick things off and it's a brooding trap storm that is equal parts lowkey party music and ASMR sonic bait. The 21-year-old Dallas rapper trades verses with Smokepurpp, adopting a flow that is laid-back, confident, and yes, delightfully menacing. With "Draco," the game just changed for Asian Da Brat, but she's playing by her own rules. The Widows-esque video is also out today; check that out here.

Marina's Love + Fear double album is finally here in full, and we're so here for the singer's embrace of love's opposite via seamless electro-pop. On "No More Suckers," our heroine derides leeches and those who only seek to drain energy — and leave bruises. The track's bubbly arrangement pulses with increased intensity as Marina gets free and clear. "I'm just trying to draw the line," she sings. Out with the old, in with the new.

P!nk returns with Hurts 2B Human today, and it manages to sound trendy without sacrificing the emotional depth she's built her name on. Hear "90 Days" with Wrabel (the queer songwriter who once made P!nk cry), a heart-wrenching song comparing recovering from a relationship to recovering from substance abuse. The parallel is strikingly illuminated by a spacious arrangement in which P!nk and Wrabel's voices are put through a vocoder, reminiscent of the achingly beautiful standard set forth by Imogen Heap's "Hide and Seek" back in 2005.

Related | You Will Love to Love Wrabel

"Loving you was easy, loving you was wild, unpredictable, loving you was awful," are the lines opening Swedish pop upstart SHY Martin's first song of 2019, and her first since last year's sensational Overthinking EP. The song boasts, first and foremost, SHY's cool-girl rasp, and is backed by a melancholic guitar evoking the xx's early work. The whole affair is updated with a stuttering trap beat and rumbling bass. The feeling created is one of delirious compulsion, which makes sense, given SHY's inability to control herself around a volatile lover. The lyric "If I see you tonight" is sung as a breathless exhale, capturing the moments you want to let go but can't. This song pulls you in and similarly doesn't let go.

Queer LA singer-songwriter FLETCHER's most recent single, the addictive, I-can't-quit-you anthem, "UnDrunk" is climbing the charts. Today, she follows up with "If You're Gonna Lie." Its atmosphere feels as love-drunk as its predecessor but is the aftertaste of a bitter fallout. "I put up with your lies just to have you for the night," she admits. Who's perfect? "I kind of like it when you hurt me" is another zinger, but FLETCHER is willing to compromise. "If you're gonna lie... do it in my bed," she sings. "By loving you, I'm losing me every night." Where is the anchor to this confusion? It's in the music itself: a stuttering, but sturdy rhythm fusing ska, rock, and electro-pop, all held together by FLETCHER's dexterous, emotional singing. The visualizer is out today, too. Watch it here.

Rising 18-year-old singer Carlie Hanson returns with her first new song of 2019. "Back In Your Arms" is a sweet song about missing a long-distance lover; Hanson's memory of her is constant and unforgettable. It's a sugary pop-rock rush of teen love, and the hormones and senses that go with it. She captures sound ("all we have is on the phone"), sight ("saw you in that red dress, doing so much damage"), and touch ("feel you on my body, wanting more"). And as usual, Hanson makes a personal experience universally relatable, with catchy melodies and all. Fuck us up, Carlie. We don't mind.

Olivia O'Brien's debut album, Was It Even Real? is out now, and though it was written from a dark place (the 19-year-old singer writes songs and speaks online about her journey with mental health), there sure are some highlights. "Just a Boy," as PAPER just learned, isn't about a specific person or situation in her life, but rather, about "a made up boy who embodies everything i hate about guys my age." From that place, O'Brien is free to cut loose, and the results are quite fun: a funked-out kiss-off about the kind of guy, who despite his best efforts to look and feel cool, is actually not worth the stress.

Related | Olivia O'Brien's Guide to 'Was It Even Real?'

Game of Thrones obsession has hit a louder-than-usual fever pitch, as the show draws to a close. Smartly, HBO is cashing in every way they can, which is one reason For the Throne, the final show soundtrack, has been assembled with the music industry's top artists as contributors to the fandemonium. That said, running wild with the theme, "Too Many Gods" by ASAP Rocky and Joey Bada$ sounds expensive and extremely dramatic, in the vein of Kanye's glitzy but menacing Cruel Summer and Watch the Throne eras. What helps sell this, too, is the fact that both Bada$ and Rocky are more melodic tricksters than other more straightforward rappers. Meaning, the huge following of Game of Thrones will eat it up. I expect memes of Emilia Clarke's larger-than-life Daenerys storming the Seven Kingdoms to pop up any moment now.

Sam Creighton's new track "Smile" is in great company of tracks by women with the title that are more spice than sugar. (See also: Lily Allen's "Smile" and Avril Lavigne's "Smile"!) But this one is all about Creighton reclaiming something men (or even society at large) have tried to take from her: her emotional autonomy. Women of the 21st century and pretty much every era know what this means: a patriarchal world in which women can hardly walk down the street without being told to fake what they don't actually feel. "Stained white teeth, I hear you yellin' from across the street. Don't you have somewhere to go? Leave me alone," she sings to the cat-callers. As the verses build tension, Creighton finds her own gratification in a chorus that bubbles up into an almost gleeful minor-key harmony. But she's not playing games: "Tell me again to smile one more time, I'll show you I'm done being nice." Consider Sam Creighton's "Smile" the feminist fuck-you the society needs. Also, if you're reading and are the kind of creep who harasses strangers, just know that those you're bothering are more powerful than you think.

James Blake's hip-hop leaning Assume Form dropped from nowhere a few months ago, and we're still stanning. But "Mulholland," a deluxe track out today on vinyl and streaming platforms, adds to our fever. It's a minimal piano ballad, featuring drastically pitch-shifted vocals and booming bass that erupts mid-song. It's vaguely creepy enough to feel referential to David Lynch (Mulholland Drive, anyone?), but accessible enough for quiet-storm moments as the weekend ends, once the party's over.