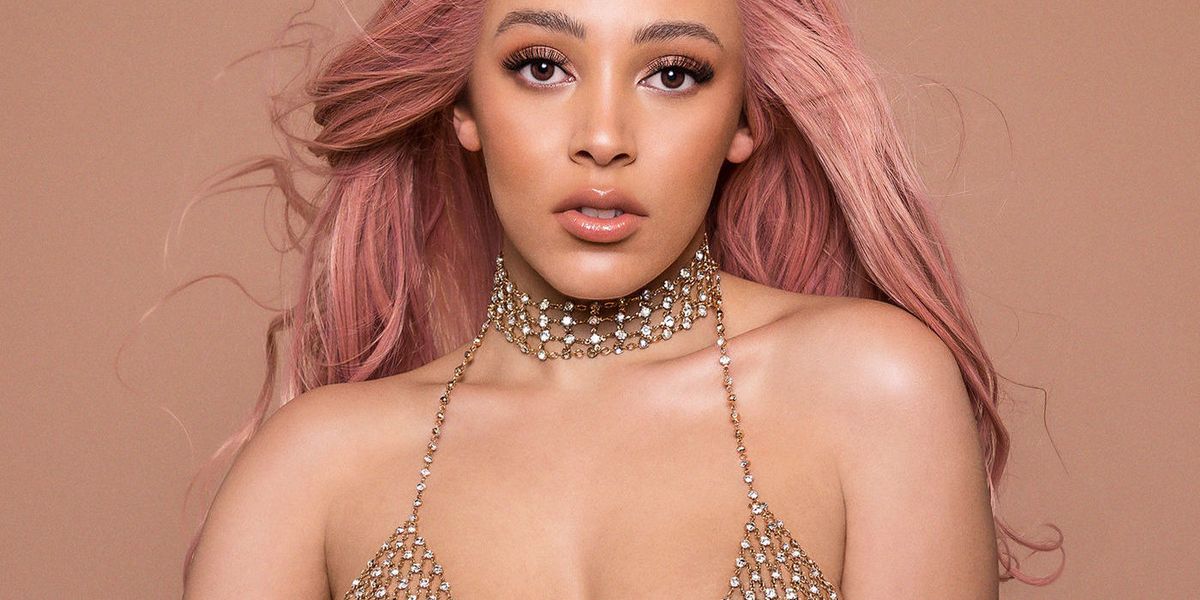 We love Lizzo, mostly for her unapologetic ferocity, and the way she loves herself. And, if you've never seen her live, you gotta make that a priority because homegirl rules the stage. Anyway, she's hit us with "Fitness" today, thank gawdess. It's a Donna Summer-sampling bop that is guaranteed to make you appreciate your own "ass that don't stop." It's full of dings and sass that also gives me a heavy "Milkshake"-era Kelis meets The Dutchess-era Fergie. But as usual with Lizzo, "Fitness" is totally unexpected in the best way possible, a wildly good time, and a creation all her own.

"Pineapple" is a fun track that leaves little to the imagine, in its praise of particular — ahem — flavors, but it's nice to hear Ty Dolla $ign, Gucci Mane, and Migos' Quavo having a ball and in their respective element on this certified trap banger, made all the more lascivious with keyboard strokes, zero pun intended.

The Weeknd, as you all know by now, pulled a Beyoncé (TM), and dropped a new six-track album under the dark cloak of night called My Dear Melancholy, *comma intended, because it's like he's writing a 28-minute letter to his cherished sadness*. The whole thing is great, even if it is filled with tea about certain past relationships, and it gives us serious vintage Weeknd circa House of Balloons vibes. "I Was Never There" one of the record's standouts, and one of a handful of collaborations with electronic auteur Gesaffelstein. It's low-fi and menacing, full of dark-circus minor chords, muted vocals, and a squealing alarm that raises our neck hairs a tad. The Weeknd is back, and he is in fine form.

Literally after months and months and years of delays and pushbacks and perfectionism, the release of Tinashe's long-awaited sophomore effort (long-awaited is a severe understatement) Joyride is finally coming! Yep, next week. I'm praying it lives up to the hype — although Ms. Tinashe, let's not get it twisted, has been grinding hard for years and I think she's a little underrated as a songwriter/producer/artistic director of her own career, but that's another conversation for another time. "Me So Bad" is a promotional single that helps deliver on the promise of all we're hoping for Joyride to be. It's got a fierce island riddim and is a sassy, sexual anthem where Tinashe offers herself on a platter to male suitors (this go-round, played by Ty Dolla $ign and French Montana, who deliver ad-libs and verses supporting Tinashe's mission to get it in). But again, Tinashe is all about artistic and sonic control. "Me So Bad" is more of a look-back-at-it game of tennis than anything else. In the music video, Tinashe rules the court solo, swatting pink tennis balls, natch,before hitting dance breaks with her girls. It's a literal representation of her power: these dudes are just suitable extras in her technicolor narrative.

LA-based singer-songwriter Doja Cat drops debut album Amala today — and it's a look, a lifestyle, and a luxury. That pretty much sums it up — there's a handful of melodic, if slightly melancholy party anthems ("Roll With Us"), moody mid-tempo swagger ("Morning Light"), cottequish come-ons ("Casual"), and cautionary tales ("Candy"). The range of textures and styles help paint a picture of who Doja Cat — born Amala Zandile Dlamini, her first name is the album's title — really is, and she's definitely someone we'll be keeping our eye on.

Tyler, The Creator dropped "Okra" yesterday and there's a line praising Timothee Chalamet's glowing skin, so people who create memes, this one is for you. But also, the Flower Boy's latest track — a one-off departure from last year's gorgeous release — just solidifies his place among hip-hop's ever-evolving youthful artistic pantheon. It feels more like a freestyle that lets Tyler rip and flex than anything else. Highly acerbic, freewheeling, and always darkly funny, "Okra" lets people know what we've always known about Tyler, the Creator: that he's undeniably, first and foremost, a tour-de-force creative.

Queerlings everywhere are screaming, as Hayley Kiyoko's long-awaited debut album, Expectations, dropped today. YouTube comments for this song are hollering "I AM HERE FOR LESBIAN JESUS" in relation to Hayley, and calling this a sapphic anthem, with the involvement of sexually-fluid R&B star Kehlani. Honestly, the song is just such a banger and also, hearing honest communiques of desire and celebrations of lesbian love and romance, is undoubtedly revolutionary. "Need you to be sure," the dynamic duo sings in the to-the-rafters chorus. We are certainly sure that our expectations have been far exceeded.

Our next certified bop is from LA singer Lexie Papillion, a former surfer who now writes bracing, anthemic indie pop under the moniker of Bloodboy. "Is Now A Good Time To Ruin Your Life?" continues in the tradition of Papillion's searing honesty, chock full of bittersweet declarations. It's true that it's a waste of time when lovers draw out the inevitable process of ~breaking up~. But as this track perfectly captures lyrically and with roars of electric guitar: there really never is a good time to end a relationship. Primarily because, duh, the effects can be devastating. I'm so here for this. Heartbreak is rarely this infectious.

Speaking of infectious heartbreak jams: Janine knows how to get straight to the heart. The LA via Brooklyn via Australian singer, songwriter, and producer draws heavy inspiration from the Aaliyahs and SWVs of the world, which like, unless you're under a rock, who isn't inspired by those icons? But Janine's vocals, full of earthy passion and tenderness all at once, paired with often-stripped back arrangements and straight-to-the-point lyrics, makes her sound uniquely, especially hers. "Too Late" is the latest in a string of singles by Janine, and this track perfectly captures the bittersweet devastation inherent in knowing someone you loved has found new happiness, and the change that can take place during distance over the years. "Too Late" feels accomplished and strong, and we can't wait to hear more from Janine.

We close out this week's edition of Bops Only with Brooklyn via Bay Area singer-songwriter Kirsten Knick, who performs under the name Voluspa. This gorgeously moody track feels ripped from the pages of the singer's diary. "I'm done getting high," Knick sings over a swelling orchestra of synths and drums, before discovering a new and dizzying kind of euphoria on the wings of love. "Wings" is the first official single by Voluspa, but the sound, described as spooky pop feels like it's something that's been developed for a long time. Methinks Knick might be a student of Stevie Nicks and a disciple of Beach House, but comparisons are lame. Knick's musical heart is in the rightest place of all: her own.