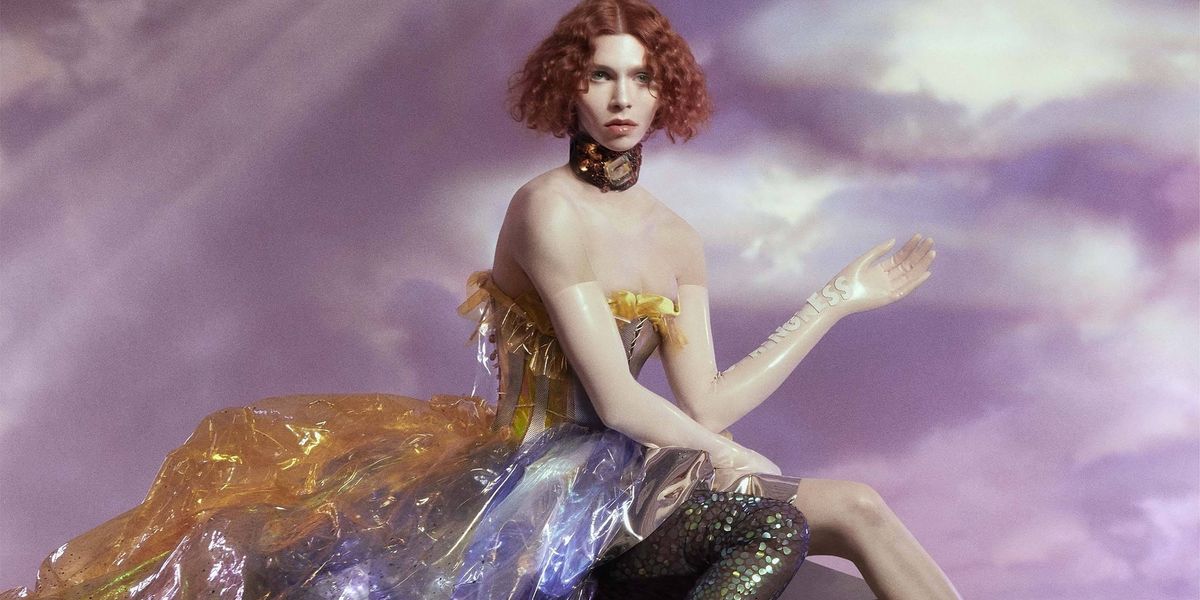 Electronic producer/songstress/innovatrix SOPHIE's debut album, OIL OF EVERY PEARL'S UN-INSIDES, is finally upon us. The whole thing is totally shocking, mostly in the sense that I pinky promise you've never heard anything like this before. It builds upon the unabashedly bubblegum-meets-latex digi-pop textures she's become well-known for, and takes it to the next level. (Literally you are not ready for "A Whole New World," which feels like three suites of "Oops"-era Britney clones tossed in an industrial-grade blender and coming out in pixelated, surrealist pieces, read: not actual Britney, you know what I mean.) "Immaterial" is the mega bop of an album full of original bops, and it reads a meta-commentary on the grossest parts of capitalism, while also being a rollicking, celebratory update of Madonna's classic '80s hit "Material Girl." Listening to this SOPHIE squeak out this song's million-and-one hooks is a source of instant and nonstop gratification, a rush of teeth-grinding sugar with no come-down, and thus, will probably single-handedly cure depression.

Rejoice! Christina Aguilera hath liberated herself from a six-year musical absence with the drop of eighth album, Liberation today. It features loads of very-Xtina drama (the fully-loaded "Maria" and the Aretha-level theatrics of "Unless I'm With You"), and a welcome dose of restraint (the pensive piano ballad "Twice," and the breezy low-key turn-up of "Like I Do") that allow her vocals and lyrics, more poignant than ever, to take center stage. My theory is: while the drama is alluring, but the seductive bangers on Liberation hold listeners close, as it were. "Right Moves," featuring Keida and Shenseea is one example of how this theory works. It's a reggae-flavored island riddim full of colorful patois, harmony, and explicit lyrics centering Xtina's no-holds-barred sexual demands. And why should she hold back? "Pound me out," Xtina purrs, a line that is sure to have gays and women everywhere feverishly hollering whilst unleashing their inner freak. Here for all of it.

The new single for Bebe Rexha, ahead of her debut, Expectations, out next Friday, is the flip on Meredith Brooks' "Bitch" you didn't know you needed, updated for 2018 with exciting modern-pop production. What's compelling about it is how Rexha owns her flaws, doing what Brooks' single did to empower herself and women. "It's gonna be a good life/ that's what my therapists say," Rexha sings in the buildup to the rousing chorus. Here, "I'm a Mess" instantly becomes a discussion about embracing mental health, in addition to acknowledging the flaws that make us all the more lovable. That's not messy, it's beautiful.

It's a family affair: Kendrick Lamar contemporary, hip-hop artist Jay Rock returns with his third record, Redemption today. Fellow Top Dawg Entertainment signee SZA assists the title track with a harmonic chorus on a track about seeking freedom, truth, and forgiveness from past wrongs. "Redemption" sails by lyrically on a current of regret and longing, but the music, at once soulful and breezy, with a well-used Guy sample give the song its wings.

Raja Kumari, the Desi hip-hop iconoclast, is quickly taking the music world by storm. "I Did It," her latest single since her debut major-label EP, The Come Up, is an excellent example of Kumari's enviable penchant for melody, rhythm, and style. "I Did It" is not only a super-confident listen from start to finish, deftly mining current hip-hop trends and R&B swagger, but it inspires those of us struggling through any systems of oppression to celebrate our own come-ups. She celebrates her triumphs and invites us all to either watch in awe or follow her lead.

Swedish producer Joakim Molitor's new tune features British pop star Cher Lloyd, and it's a certifiable summer-ready bop. "4U" is the first time we've heard from Cher Lloyd musically in a while, who has been busy with marriage and motherhood, but is in the studio prepping more music for later this year. It's a welcome feature for Lloyd, who sounds amazing, yes, but adds colorful, irresistible melodies to ensure "4U" is a definite smash, in the vein of Robyn's collaborative work with Royksopp. Furthermore, it all sounds so easy: easy to love; not easy to forget. Why would you want to? "4U" is for us.

Betty Who's first EP since last year's The Valley is here and it's chock-full of nostalgic, gleaming '80s-tinged pop. "Ignore Me" is easily one of the standouts of Betty, Part 1. To be clear, the whole five-song effort is pretty great, but "Ignore Me," which came out earlier this year, is a record centerpiece in a way. Its lyrics, which take shots at shitty male lovers and men in power: "You don't get to know about my life, my right, my highs," are not only hyper-relevant in this day and age, but see Betty Who reclaiming her own power. It's a feminist anthem and an impossible-to-ignore bop all at once.

"Mine" is the latest single from Alice Glass, formerly of the electronic pop act Crystal Castles, released in light of accusations against her former bandmate Ethan Kath of rape and sexual assault. Glass take the pain of her experiences and turns them into artful music that is not only catchy, brooding, and real, but guaranteed to resonate with all who really take it in. Drag icon Violet Chachki stars in the video for the single, also out today, both of which are about "someone who hurts themselves in an attempt to regain control of of their own life and experiences," according to a press release. Glass is clear to mention that she doesn't condone self-harm, but the ritual of taking something from oneself is a way to take back control in light of abuse. As a song, "Mine" might have dark context, but its synths and booming production, combined with Glass' pop-wise melodies, is sure to be addictive enough to reel listeners in to the harrowing message. Pop as bait.

In light of recent, much-needed fervor around mental health concerns, "Ava," a new taste from Let's Eat Grandma's upcoming sophomore album I'm All Ears, is here. Unlike past releases by the British teen duo, which meld indie rock and electro-pop flourishes to great effect, "Ava" is just piano and vocals, rendering the track's subject matter of mental health and struggle all-the-more visceral. Band member Jenny Hollingsworth said in a press release about the track that "from the outside looking at a person, you can't always see how difficult some problems are to solve." "Ava" may not be a bop in the way we're prone to thinking of them (catchy, light, high-energy), but bops with important social messages matter, too, especially if they help others feel seen. "Ava" is not to be missed.

Make My Bed, the debut EP from New York songstress King Princess is out today. It's full of tales of queer romance and iconic songwriting ("1950" and "Talia" are simply undeniable), and this beachy, surf-rock bop, "Upper West Side." The song eviscerates rich-girl culture ("credit cards cutting all of your lies") while also admitting a type of love or jealousy or both. It's a genius contrast. "I can't get enough of you," Princess sings, before launching into airy chorus of oohs and ahhs. Neither can we.