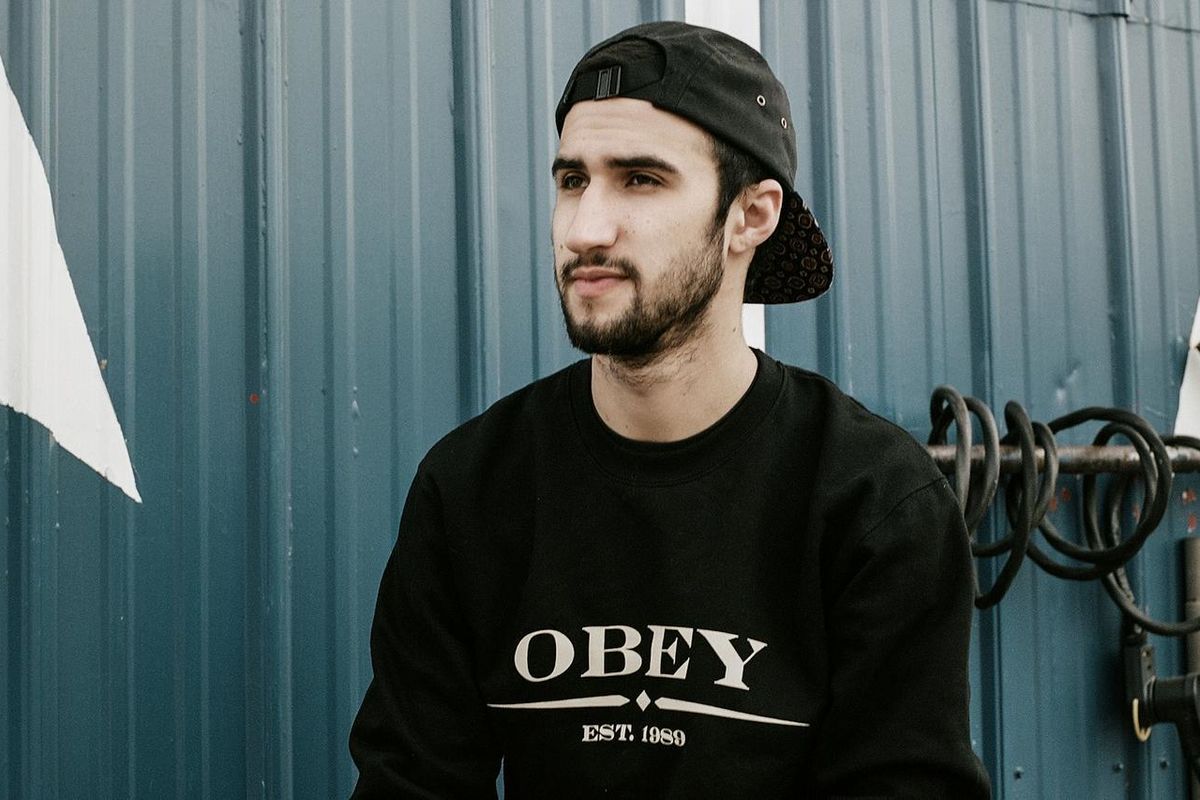 As a slew of new producers come on the scene each year, Toronto-based, Paris-raised beatmaker Stwo has found his footing with an undeniable advantage: the opportunity to collaborate with industry giant Noah "40" Shebib, Drake's right-hand man. A rare chance came Stwo's way when 40 threw the weight of his support behind him, signing the 23-year-old to his publishing company and taking him on as a protégé in what Stwo describes as a "really chill and trusting relationship." With viral earworms including "Lovin U," official remixes such as Majid Jordan's "Her" and Kehlani's "Runnin'," and a new EP called Distant, out late November, Stwo's star is only on the rise. Not to mention his SoundCloud page, 165,000 fans strong, is followed by the likes of current electronic music heavyweights Disclosure and Flume.

Yet another validation of Stwo's talent comes from musician and part-time Twitter philosopher, Jaden Smith, who premiered "Haunted," the first single from Distant, this past weekend on his Beats 1 radio show MSFTS Frequency. Smith deemed it "the most beautifulicious song of the week" and praised Stwo as "a freaking genius on another freaking level." Amidst all this, we caught up with this Stwo while he was on tour with Chicago rapper Mick Jenkins to discuss studio sessions with Drake's famously discreet beatsmith, what to expect from the EP, and the definitive pronunciation of his moniker.

How long have you been making beats and what got you started?

I think I started making beats like four years ago when I was 18 or 19 and I just started because I used to play bass in a band, and since I can't write music and I can't read it, it was hard for me to tell my friends the way I was seeing the music so I just thought about a way for me to make my own music by myself and not having to tell people, "You should do that." So I just bought a computer and I started making music. And yeah, since then, that's all I've been doing, every day.

What was your upbringing like? Did you have musical influences?

All my dad's family's side make music somehow. Like my granddad played piano, my dad played guitar and piano, some people sing, too, so I've always been around music. I grew up listening to a lot of funk and disco because my dad loves it and my dad would always play it when I'd be around, but he'd never teach me because he learned everything by himself, so he was like, "I did it myself, so you gotta do it yourself," which I respect. And every time I'd be like, "Can you explain to me how to play this chord?" he's like, "No, just try and you'll see." So I've been doing everything by myself but yeah, it's pretty much my dad who put me on to music and even now, he's still the one who supports me. He's the one who told me, "You can quit school and just do [music]." Because I feel like he's kind of living through me, like what I'm doing right now. My dad has been a huge influence on everything I did. I still make beats with him. Even for my EP he helped me and my next project, he helped me for some tracks.

What can we expect from the new EP?

It's been a long time since I dropped anything. My last project was called "92," it was just a beat tape for any rappers who wanted to try something, it was really inspired by all the OVO Sound, because I really loved [Drake's] "Nothing Was The Same" album so I was in that mood at that time and I was trying to make some stuff that would sound like 40.

There's so many things going on with SoundCloud and there's so many new producers that I didn't really know what I wanted to do anymore, music-wise, because I felt like everybody was doing the same thing. So I got pretty uninspired for a long time for my own music, I was just focusing on those beats for rappers so it would be a way for me to get away and not think about it. But somehow I got back into it and I made a lot of different projects that I'd always end up being like, "Ugh, I don't like it any more." But I think this one is getting there -- like, it's not what I want, but it's getting closer. It's nine tracks and it's more experimental, I guess. There's tracks where I try to sing and there's tracks where I play all the instruments, so there's tracks that will sound like '70s rock or hip-hop...I'm just trying a lot of different things on this one and we'll see how people react to some tracks, because I want to drop something else after that pretty soon, like another little EP and I might just see what track they like the most from this release that I'm going to drop and maybe focus on that sound.

How'd you first connect with 40?

Before I dropped the "92" project, the one with all the Drake-inspired beats, 40 followed me on Twitter, and back then, I didn't really know who he was...I mean I knew, but I didn't know how important he was. So I was just like, "Wow, he seems important." And I was really in that Drake Nothing Was The Same high, like I was listening to the album every day, so it was crazy. But I didn't message him or anything. I didn't want to be like, "Thanks for the follow, man," or something. So I waited like two weeks and then he hit me up and he just told me that he really liked my music and he wanted me to send him some more stuff that I didn't release, just beats. I sent him the "92" release before I dropped it and...he's super busy, but I wanted him to tell me the day after that he liked it but it took him, like, two months. So I dropped it for free, I didn't even wait. And eventually two months after he got back to me and he told me that he wanted to sign me to his publishing agency, Alice Island, and he wanted me to come to Toronto to help him work on some stuff, so I moved. I didn't even think about it twice, I just moved to Toronto and met him. I've been in Toronto seven months now and I go to the studio as much as I can.

I feel like he's my mentor right now, like he's trying to teach me everything about the industry. It's not just about music; I feel like he knows so much and he's a really good teacher and every time I have a question he always takes time to answer me and gives me so much advice about pretty much everything a 23-year-old producer would love to have, so it's the craziest opportunity that's happened to me so far with the music since I started. And yeah, we're still learning, but I feel like we have a trusting relationship already and he's introduced me to all the people he's working with and they're all super nice to me. They all accept me because I feel like 40 is this guy who doesn't really do interviews, doesn't really go to parties or anything but everybody respects him because he built OVO and Drake's sound, so everybody knows who he is, but he's not showing off, he's not about social media or anything. And I really respect that and I really hope that I'll be the same way about social media maybe in 10 years or something. It's just the best for me, I can't ask for more.

People often trip up on the pronunciation of your name. What is the origin of the stylization?

It's nothing crazy -- my friend at college used to call me Stew. My actual name is Steven, so that was a nickname. So when I started making music I was too lazy to find a cool name, I was like, "I'm just going to keep this one." I couldn't speak English back then, so I looked it up on translator what it means and it means soup, like chicken soup. I didn't want people to call me soup, so I put an "o" instead. And now it doesn't mean anything, but people told me, "It kind of looks cool," so I was like, "I'll just keep that." That's pretty much it. I wanted to know how people would see it from online and I was like, "Oh, if they see 'soup' that's not cool."

Do you think growing up in Paris shaped your sound?

Oh yeah, definitely. It's so funny because I'm working with all these hip-hop guys and I don't know anything about hip-hop; I really don't. Hip-hop is all about knowledge: knowing rappers, producers, and I don't know anything. I'll go with Kaytranada and he'll ask me like, "You know him?" and I'm like "No." I just know electronic music because I'm French. It's super Frenchie but French house -- Daft Punk, Justice, Danger, that's all I've grown up with. Even my friends they make fun of me like, "You don't know shit about hip-hop," and I'm like, "No," and they're like, "You're working with all of these guys? Don't you feel kind of guilty sometimes?" I wish I knew more, I just didn't grow up listening to hip-hop. Like, I would listen to 50 Cent, Eminem, you know, Top 40 type thing, but I would never get really into it. I really knew about Tupac and Biggie when I was 19 or something, I never got into that before. Now I love it, but I'm still trying to learn.

How do you feel about dropping new music since it's the first time in a while?

I don't know, I'm kind of stressed out about it because it's been two years [since my last drop] so I don't know how people are going to react to it. I'm excited about it, too, since it's been a while since I dropped a project and I feel like I really need to do it now so I'm just excited and scared at the same time. I guess everybody is when they're going to drop something, but also since it's been a while since I dropped anything, I really want to get out of this SoundCloud bubble and I feel like it's a chance for me to do it. That's why it's taken time and I don't want to screw this up.

"Haunted" is available on iTunes and Spotify now.