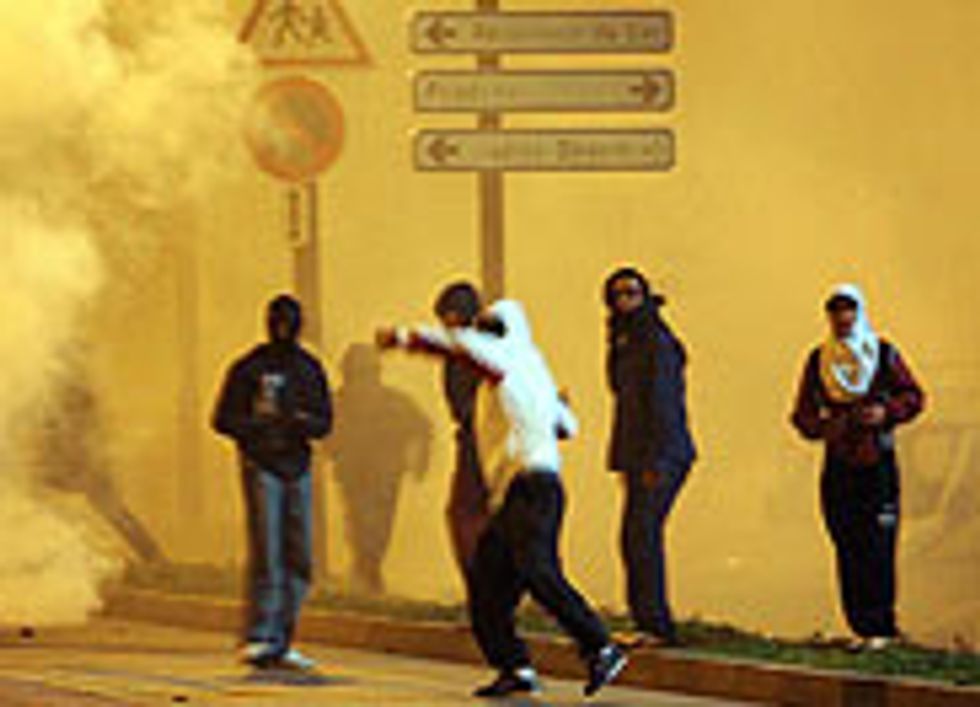 Jacques Chirac is beginning to sound more like his counterpart in Israel, Ariel Sharon. In response to the riots now heading into their third week and spreading outside the country to neighboring Brussels, Chirac is reported to have said: "We understand also that the evolution of things requires respect for everyone, justice and equality of opportunities. But there is a precondition: the restoration of security and public order." These are, if not the very words, certainly the meaning of Sharon's words when faced with dealing with the Islamic Revolution in his midst. In Israel, the media is beginning to refer to the riots as France's "Intifada."

Direland's left-leaning historical analysis sets the story in perspective and updates it with comments from leading French intellectuals. The French language is rich and Doug Ireland goes to great lengths to parse the meaning of the incendiary words used by interior minister Nicolas Sarkozy to chracterize the rioters. The Economist points out that while  Sarkozy's offensive remarks helped spark the flames, his approval ratings remain high. Sarkozy is expected to run for President and is currently deemed the front runner. By the looks of it, the French government plans to buy its way out the jam with huge subsidies and development grants -- otherwise known as payoffs -- to help quiet the suburbs where the majrity of the rioters live. This will prove to be France's Hurricane Katrina, where politicians bicker while the situation gets so out-of-hand it takes Herculean efforts to set it right again. Which they won't be able to do. France will never be the same again. With one person reported to have been killed in a beating, the stakes have escalated beyond property damage that had spread as far the Marais in Paris, home to a large gay population. Some are calling it the biggest challenge to the government's authority since the student riots of the 1960s. Some are saying it's worse than that, a full-out race war.

As a francophile, I'm saddened by the thought of the old France dying.  I wonder if I'll ever be able to enjoy Paris in the same way again. Time will tell, but the illusion of civility that France has so long mantained has been laid bare and we can now see the festering sore that lay beneath, sad as it is