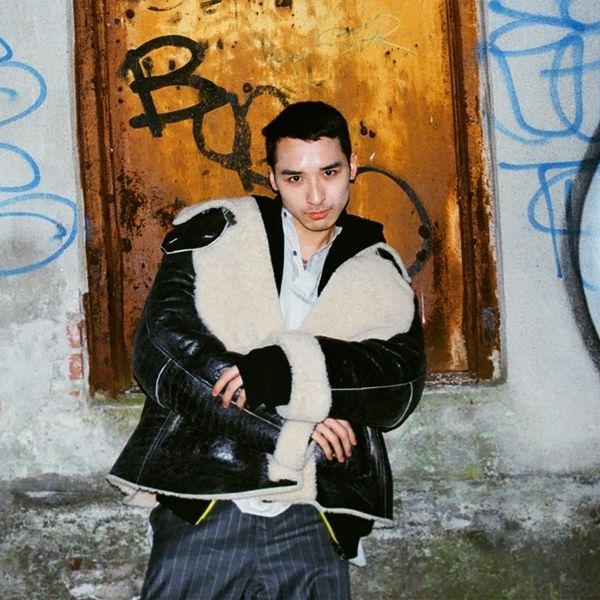 Popularity is relative, and especially in the digital age. You could have hundreds of thousands of followers online, but be completely unknown in the streets — massively famous on Instagram, YouTube or Twitter, but lack any kind of real, authentic cool in person. For our new series, Coolest Person in the Room, New York-based photographer Megan Walschlager pinpoints all the people whose energy is contagious regardless of their following count or celebrity. Meet Franky Tran (@franky_tran) — fashion designer and development manager at Area — one of NYC's hottest new labels.

What is your day job?

I work at Area; I work on the design team as development manager. So I basically over see the entire process of executing a ready-to-wear collection, four times a year.

I went to school in Chicago for fashion and I wanted to pursue something that was not so... I'm not sure what led me here actually, I just kind of wandered in.

Is this your first job after school? I googled you before we met up today and I forgot you won the CFDA award in college.

Yes. In some ways I kind of feel like I meandered into where I am now, but as I think about it it was much more of a linear process. I went to fashion school in Chicago, I interned at Prabal [Gurung] for a summer, and then I moved to New York, started at Area right away, and two years later I'm still here.

"It's really exciting to see someone live, or wear, or perform in something you've made."

That it can be fun and expressive and creatively fulfilling getting to see people that inspire you bring your work to life. Because at the end of the day it's really exciting to see someone live, or wear, or perform in something you've made.

Totally and I feel like Area is very nightlife-centric. Isn't it named after that old club in NYC?

Yes and it definitely has that essence. And even when I was living in Chicago, I was always obsessed with the nightlife. And even has a kid. That's how so many young queer kids go out to live — or explore — their truth.

What did fashion mean to you growing up?

When I was younger I don't think I was aware I was so much into fashion — I just knew that I had to dress how I felt. I wasn't necessarily looking at designers or other brands, I was just a 14 year old who was like, "I feel this kind of way, so I'm going to cut my clothes this way." And that's how I did it.

My parents would get so mad at me for ruining all my clothes that way, so at some point they literally started hiding my scissors away from me because I was cutting up all my clothes. Like my church clothes, my street clothes — all my sweaters.

Yeah, and I'm sure that was hard too, being from South Carolina. I'm from Indiana and I remember my first time seeing Lady Gaga and I was so stunned. I had never seen anything like her before!

Right! I grew up in Catholic school — like Wednesday and Sunday services — and then I went to a very rural public school. Being surrounded by religious, conservative, white people, it was a very isolating experience. And I guess I felt silenced in so many ways because of that, so as a response I started being myself through clothing. Like if I was mad one day, I would cut something off and patch something else on to it. It was always like my little secret of what I wanted to say, but felt like I couldn't.

"I love a boy next door silhouette — especially for the club and being on the dancefloor — I want to be comfortable, but still sparkle."

Do you have a go-to outfit you love to feel good about yourself now?

I obviously — and not just because I work at Area — have always loved shiny fabrics and shiny things. Even in school, I was the queen of Swarovski crystals. I just had boxes and boxes of all these crystals. Just anything shiny — like disco, but boyish. I love a boy next door silhouette — especially for the club and being on the dancefloor — I want to be comfortable, but still sparkle.

It's important to sparkle.

What are some of the coolest places in NYC right now?

It's so hard for me to say right now because all I've done is work recently. Well, actually, I'm like, "Ugh, I don't remember the last time I went out," but I went out last week. But now I'm like where the fuck did I go? What did I even do? I want to say I went to Rosemont, but I don't think I went to Rosemont. I also love Lalito. And I also love Popeyes. I eat so much Popeyes. Specifically the Popeyes off Myrtle. The number 7.

Anyone who knows me, knows I only listen to one song on repeat at a time. I get so obsessed with it, that that's the only thing I'll play for like three days. And I basically only listen to Kylie Minogue.

Do you have any fashion week survival tips?

Drink enough water. Always have your toiletry bag with you at all times, including deodorant and a refreshing spray. Find a bathroom to scream in.

Easy enough! Do you have a special getting ready routine?

I love a good sheet mask. I'll just prance around my apartment in my underwear and a sheet mask, blasting Kylie Minogue. That's it. And half the time I don't even end up going out. That's just all I do.

The pregame can be more fun than the actual party.

Yeah, I think so too.

"Work twice as hard as the people around you, and never compare yourself to others."

Yeah, and you get to be your own DJ. Sometimes you get to a party and you're like, "Aw this music sucks and I wanna leave." At home you never have that.

I'm going to a wedding in Texas on 4/20 and I'm going to turn some looks. I'm making them custom for me. I have yet to figure it all out, but I'm thinking like disco, goth.

When it comes to designing, do you like designing for a specific gender or do you take a more genderless route? Because Area's all womenswear, right?

Yes, it is. I would say I design more specific to identity, if that makes sense. I wouldn't design anything that I wouldn't want to wear. But I also see myself in so many different ways. I feel like I oscillate identities. Like for this wedding, if I want to do like four days worth of really cute Texan boy looks, that's what I'll do.

Advice for someone younger who wants to get into fashion?

Work twice as hard as the people around you, and never compare yourself to others.

Do you have any thoughts on the current state of the fashion industry?

A Year of Disruption: 20 Designers on How 2020 Changed Fashion Forever