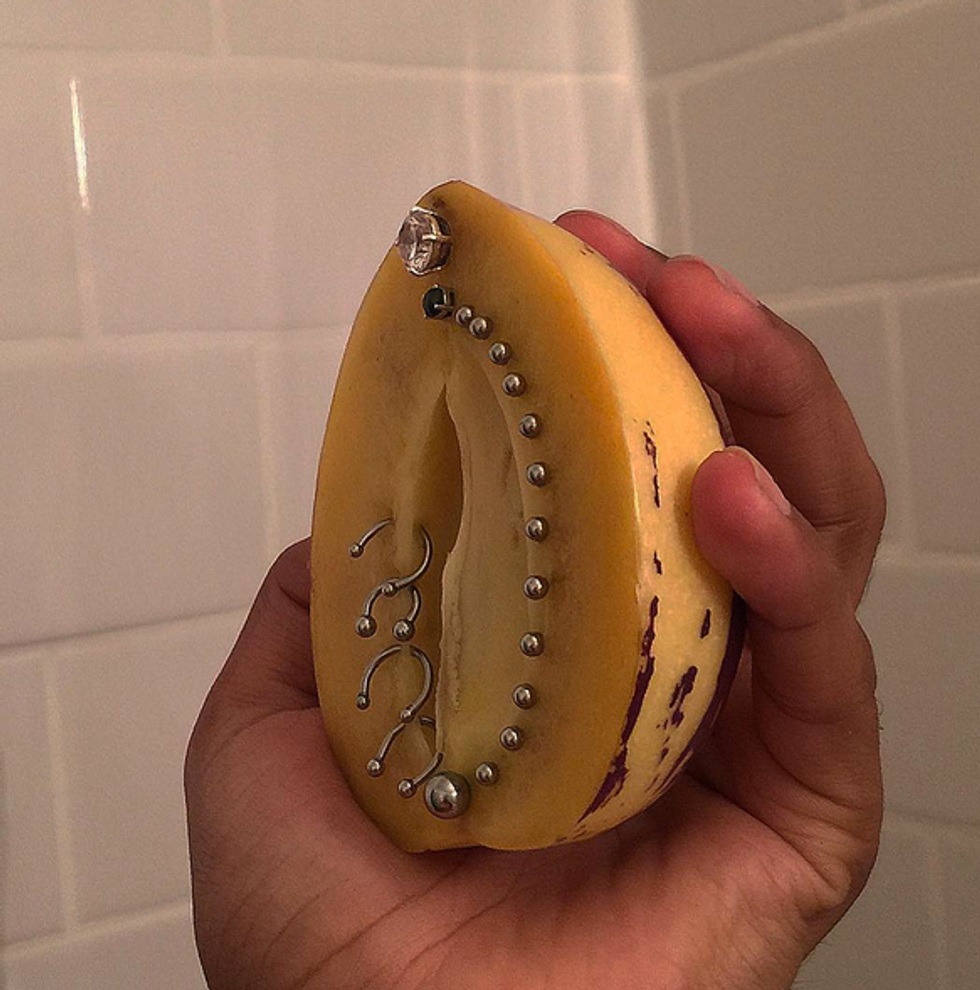 Forget Ears, Septums and Eyebrows: The Latest Piercing Trend is Food and Clothing

Though Barragan's earlier designs focused on tech-y iconography like Wi-Fi symbols printed on pants and Nokia cellphones stamped across pullover sweatshirts, the Mexican designer's been exploring object piercing for a while now, often using his Instagram to showcase the endless artistic possibilities of piercing everything from oysters to papayas.

Victor Barragan's pierced eggplant for YTINIFNINFINITY. [Photo via Instagram]
"I've been focusing my Instagram feed on creating still lifes using things I have around me," Barragan says. "I started with food as an inspiration and wanted to give new meaning to it by simulating human body parts and piercing the food like it's flesh." Indeed, after looking at glistening, studded oysters or the elongated, aforementioned eggplant, the suggestiveness makes it hard not to think of genital piercings.

But it's not just food that gets the piercing treatment -- Barragan's also pierced sleeves and pant waistbands. A few months back, after meeting in Mexico City, the designer joined forces with NYC collaborators Loney Abrams and Johnny Stanish to pierce a pair of red-tinted sunglasses with an eyebrow ring -- an idea that revisited the Abrams and Stanish's nipple ring bra, which, along with Tel Aviv artist Oren Pinhassi's 2009 installation, "Piercing," were precursors to Barragan's work today.

"About two years ago we pierced a bra with nipple rings and some panties with a clit ring for an exhibition at Beverly's [in NYC] called, Polly Wants a Cracker and Distressed Denim from Forever 21," Abrams and Stanish tell us. "The project was largely about Forever 21's rebranding of Kurt Cobain, and we were interested in the ways subcultural trends are repackaged, resold and reproduced. Piercings don't really make sense with fast fashion, where trends change week-to-week, so we pierced bras which can be taken on and off."

A pierced bikini by Loney Abrams and Johnny Stanish. [Photo via Instagram]
Since the Beverly's exhibition, they've pierced polo pockets, bikini tops, dog collars and even cacti, though they admit having to stop because this generally killed the desert plant. In addition to Barragan's latest collection and these projects from Abrams and Stanish and Pinhassi, unlikely use of piercings have made bold appearances on an evening gown during Anthony Vaccarello's Paris Fashion Week show and on a jacket for Life In Perfect Disorder's AW '15 collection.

"Individuality, as an idea, seems a bit old-fashioned at this point, especially as a fashion statement," the duo say. "Standing out is blending in. Piercings signify this banal edginess that we're really interested in. Piercing aesthetics have been really profitable branding tools for corporations trying to appear counterculture. Using piercings in clothing and art acknowledges the branding of cool in this really literal way by just taking something that has been quintessentially cool for decades, and putting it on clothing."

Others see this piercing trend as a nod to the nostalgia cycle's newfound interest in the early/mid 2000s. "Fashion seems to be reaching a peak of excessiveness, referencing the early 2000s," Third Fernandez, the model who wore Barragan's eggplant purse during NYFW, says. "Style is becoming more gaudy and frivolous, maybe, but perhaps reflective of our self-indulgence as Millennials, who saw excessiveness come into fashion growing up."

But, as with anything, the outlet that spawned this proto-trend may be responsible for its early demise.

"A lot of people have been piercing objects on Instagram lately, so it's kind of gimmicky at this point," Abrams and Stanish tell us. "What we thought of as a way to criticize a trend became a trend in itself. The collective consciousness has a way."
You May Also Like
Entertainment