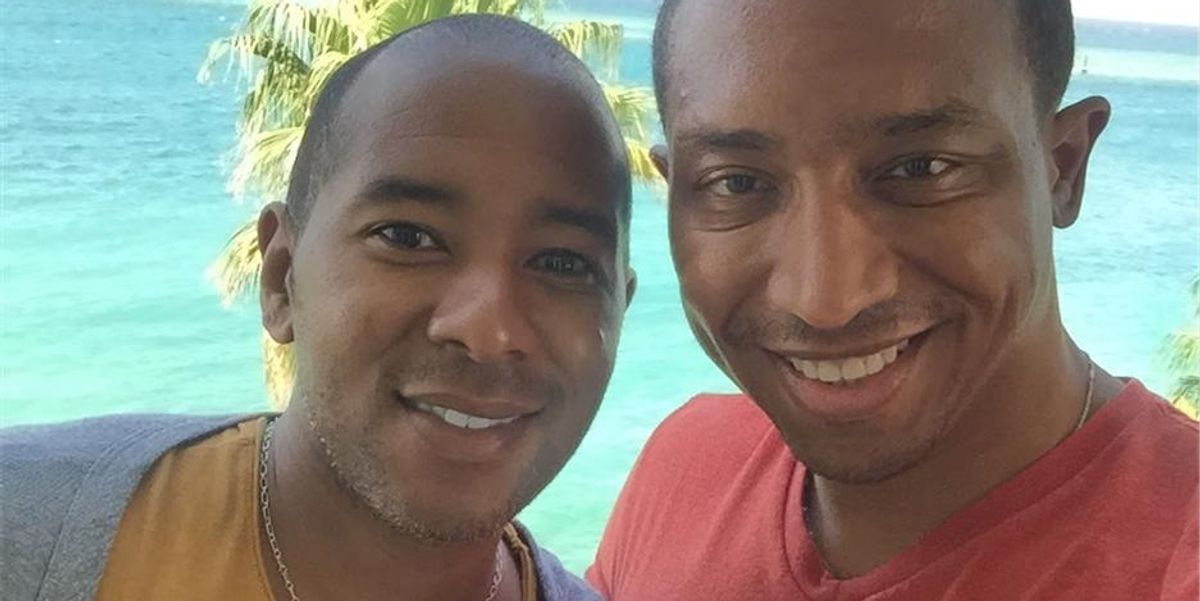 For Ramon Gardenhire and Cecil Dearborne, There Weren't Just Sparks but Fireworks from the Start

The world works in mysterious ways--sometimes we run into life partners by chance and sometimes on purpose. For Ramon Gardenhire, 37, and Cecil Dearborne, 45, their romance included a little bit of both. The pair met at a benefit for the AIDS Foundation of Chicago, where Ramon works as a Vice President of Policy and Advocacy. But while fate might have had a hand in their meeting, so did their friends. "Our friends knew we would be a match before we did," Cecil, who is head of the Associate Consulting Program - North America at technology consultancy ThoughtWorks, says. "They manipulated us quite a few times to get us into the same space to interact with each other."

Turns out their friends' instincts were good. Cecil and Ramon hit it off, and began dating (on Independence Day, no less, and, in true Hollywood fashion, with fireworks going off as they shared their first kiss). "I knew the relationship was going the distance when we sat down one day in a park and discussed how we both needed to be willing to grow and change to make things work," Cecil recalls. "It was then that I knew I was talking to someone that wanted to be my partner in life and wasn't interested in me for superficial reasons."

When it came time to pop the question, Cecil chose his own birthday party for the big event. "Ramon was so pre­occupied with planning the party that he didn't realize the machinations that were going on behind the scenes." One of Ramon's best friends was in on it, and gave Cecil a gift in a Tiffany's box (Ramon's favorite store). "In that box, was a card and another box. The card had a note that said to give to Ramon," says Cecil. "While Ramon was reading the card (which said "Say 'yes'"), I opened the other box which contained the ring. When Ramon looked up confused about the card, I was in front of him on my knees proposing to him." Ramon did as the card instructed--he said "yes!"--and the two were engaged.

Before 55 close friends and family, Ramon and Cecil made it official. Cecil notes, "We wanted the wedding to be intimate and to include those that supported us along this journey." They decided to celebrate their love on the anniversary of their first date, four years earlier. The fourth of July ceremony was mostly left up to their planner, Karriem Watson from Stix and Stemz Events, along with Kehoe Designs. "We decided to give directions on what we wanted for the event but we never saw the final product until we were experiencing it along with our guests," Cecil says. "One of my best moments was seeing my ring for the first time as Ramon was presenting it to me. It was such an intimate moment. I knew he put much thought into it because it was 'so me' and know one there knew that he was surprising me in that moment." Other memorable moments walking beneath a bower of sparklers held up by their guests, who all dressed in white for the event.

A year of marriage later, the couple still knows how to express love for each other every day. "I travel a lot and every morning when I'm on the road I text Ramon, 'Good morning, sexy beautiful,'" shares Cecil. "We also randomly give each other gifts including surprise bouquets of flowers sent to work." "One of the ways in which Cecil speaks my love language is through spending quality time with me," Ramon adds. "For instance, every night before we sit in bed and talk about our day and what we have planned for the next day. And Cecil rubs my feet. Now it's one thing to massage the feet of the person whose heart you are trying to win but it's another to continue to rub their feet as the years pass by. That is a testament to the affinity and devotion Cecil shows me on a daily basis."