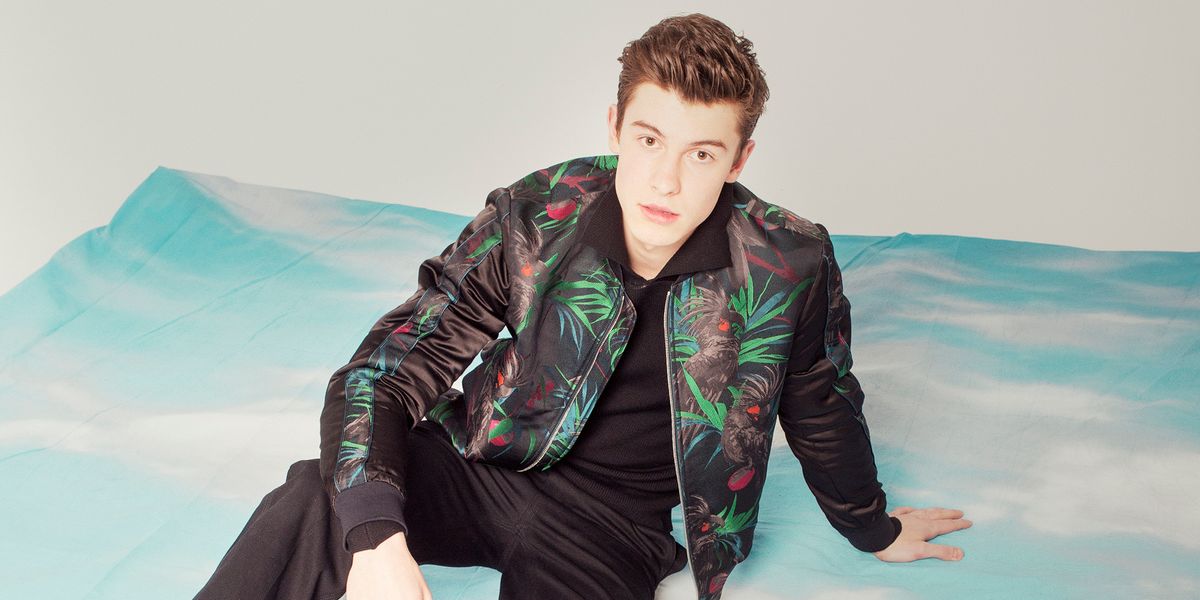 Shawn Mendes Wants You to Know Who He Really Is

Like fellow Canadian Justin Bieber, Shawn Mendes launched his career by posting cover song videos online. The 19-year-old singer has come a long way, currently performing on his second world tour and, when his song "There's Nothing Holdin' Me Back" recently went number 1, becoming one of five people to have two chart-toppers before the age of 20.

Looking back from your first concert ever to now, how do you feel like you've grown during this time?

It's a world of difference, with 90% of it coming from how confident I am on stage. Confidence is everything when it comes to performing, so the more confident you get, the more exciting you are on stage and the more people are drawn in.When I look back at shows, I think the shows are well- produced, the music sounds amazing, my voice sounds good, but now I look back at a show I did yesterday and there's an added magic to it. The truth is, I've played 500 shows now, and that's why it's a great show, not because it's great production, great lighting, great set list -- it's the pure experience behind it.

How do your goals grow?

For me [my goals grow] whether it's my music that I'm writing or it's performing or it's my personality and the way I'm handling business or anything I become very obsessed with it at any given time. As the tours get bigger, I become a lot more obsessed with making sure that the shows are good enough to be on the stage of an arena. Do you know what I mean?

I think a little bit of both and a lot of confidence. With a lot more popularity, there's pressure in a good way to be a lot better and I think that's what's going on right now for me. You know, I feel like the more people get to know me and with my name starting to really get out there, I find in a good way pressure to really show up when it comes to my live performances.

Yeah, I completely understand that. If you're performing at these dream stages, what is the next dream?

Have you found more confidence along the way?

Has the fact that you got your start on Vine and other social media platforms helped you launch your music career or been more of an obstacle? Your start on social media seems to be a running theme in most profiles about you -- does that bother you at all?

I kind of honestly just ignore it. But at the end of the day if people come to a show they're going to leave knowing that I am a real musician and I write my own music but one thing I think I really learned and understand is that the whole world can't truly know who you are and what you're about in three years. It takes time, you know? The people who I strive to be have been in the music industry for ten or fifteen years and you can't rush that process of how people think of you and what they think of you when they hear your name. That's something that is going to naturally happen.

I think just like you would [navigate] any job. This is a lot more confusing because it's a lot more personal of a job but it's really not. Anything that you think would be socially inappropriate or socially wrong to say because you haven't known the person for two or three years -- don't say it. I think it's a lot simpler than people expect but, with that being said, I've known my fans for two or three years so what people see online who don't really know me, my fans know me better because they've been at shows and they see me after shows and we've talked. So it's a confusing thing to talk about because there's so many fans, who do know me a lot better because they pay such close attention instead of just what's right in front of you. I guess what I'd say is I don't say anything that I wouldn't say to somebody I just met. But I'm also not scared of being myself.

One thing you hear a lot of artists say these days is that, thanks to social media, fans these days don't seem to want to idolize musicians, they want to be their friend and they view them in a very different way. Have you noticed that?

I think yes and no. I think I agree with that statement and I don't. Well, because for me I see [my relationship with my fans] as like this older brother thing, where he's your older brother who's the captain of the football team but he's someone you look up to and admire and ask for advice and pay attention to. But he's also your brother at the same time and I think that's the best of both worlds. I know that they all look up to what I say, and I try to be a great role model. They truly appreciate what I say and what I do, but at the same time they all remember that I'm human and I'm just a dude and that's really nice.

Is that responsibility stressful though?

I ran head first into the industry when I was 15 and so it feels very natural for me to be honest to be this way. I like being able to be a role model for people, especially younger kids.

Are you able to surround yourself with people your own age?

Yes absolutely. All the time I'm around people my age and there's lots of people my age that are completely on the same wavelength as me who aren't famous singers or famous athletes. I think that goes to show that it's not about hanging around adults because you're mature.

It would be nice to turn an invisibility switch on and go to the bar with my friends and just relax in that way. With that being said, on the flipside, I also get to go to a bar in London, England with my friends and if there's a couple of people that want to take pictures along the way, it's okay because we're in England, and this probably wouldn't be happening if it weren't for that.