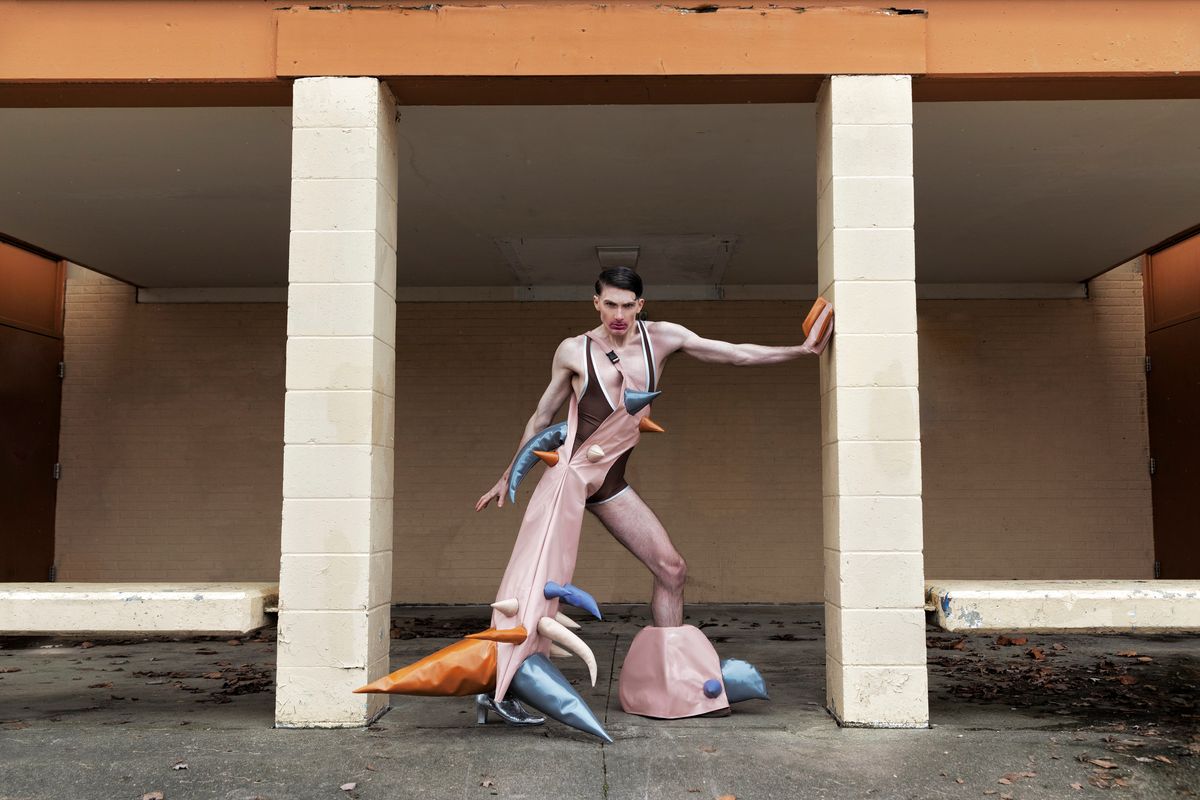 Vogds Doesn't Want to Miss Out on 'Fomotion'

If you get whiplash listening to queer artist Vogds' new song, "Fomotion," don't worry — that was their intent. The song is a hyper-chaotic trip through the all too familiar fear of missing out that has gripped us all at one point or another in the digital age. Shifting pitches, upsetting textures, and mounting anxiety reside at the core of the track. These elements are ultimately defining a new pop generation, one that Vogds refers to as "hard-pop," but there is also a sense of abandonment of musicality in general.

A lack of convention is exchanged instead for the creation of an elevated physical world within the track's frequencies. Vogds says this instability is commentary on capitalism and accelerationism's effects on FOMO more generally. It's looping, never-ending havoc. This lack of resolution is felt twofold as well, since "Fomotion" is both a song and a "look:" Vogds created an entire fashion world to accompany the track.

Editorial images of Vogds dressed in exquisitely constructed, self-made bodysuits reflect the dystopian qualities of the track. Gigantic, dinosaur-like boots, are sewn together by massive stitches; rubbery spikes protrude from each and every side of the garments. Vogds has transformed into a monstrous, seemingly prehistoric, mark on a sort of queer futurism.

Listen to "Fomotion," below, and read PAPER's full interview with Vogds about the track and their unusual approach to construction.

The textures in "Fomotion" are really interesting. How did you go about producing it?

"Fomotion" is by far my most chaotic pop track thus far. I produced the whole thing in GarageBand and did everything on the track, like producing and mixing, other than the mastering, which was done by Jeremiah Meece. This track actually marks the end of my use of GarageBand as I embark upon working in Ableton. I really wanted the track to feel as chaotic and unpredictable as scrolling through various social media feeds and being enveloped with lust, love, anxiety, and FOMO. The song's structure also matches this on-edge feeling, popping to different sections through aggressive, industrial noises, barely letting the listener breathe before they are bombarded with a new feeling of anxious eruption. I myself have a very excited, happy-anxious composure that this song contains but also turns on its head and shows another side of that anxiousness to keep making and producing and giggling.

What music, or other medium, inspired you to produce a song like "Fomotion"?

While making "Fomotion," I was listening to a lot of lesser known tracks on Britney Spears' Blackout album, such as "Freakshow," or "Perfect Lover," Prince's "Black Sweat," Janet Jackson, Charli XCX, 112's "Anywhere" and "Q, Mike, Slim, Daron" to name a few. I am always hugely inspired by Missy Elliott, SOPHIE, FKA Twigs, and Björk in their ability to combine their incredible visual practices with their music. I wanted to push this song deep into hard-pop, industrial absurdity, while having more of a melodic push than its Pocket Monster predecessors, which have a certain paired-down, sound-effect quality to them. I still see this track in the family of those Pocket Monster songs, but taking them to the next level or illogical conclusion. I am always inspired by queer fashion while making my music, especially fashion made locally here in Chicago by drag artists and designers like Authentic Skidmark, Edaa Birthing, and Sky Cubacub. Since fashion-making is so deeply rooted in my return to music and my practice as a whole, I make a new look for almost every performance as a way to build new solo collections that speak to different tracks and types of production that I am interested in at the time. The song also captures this feeling of accelerationism, which seems to be happening politically and economically in our country to a devilish and awful extent, which I attempt mock and dismantle within the track.

Was making the song sound destructive intentional so that it could be paired alongside the destructive, dinosaur-like outfits in the artwork?

Yes. In my practice, fashion designing/making and music making go hand in hand. I was making these outfits while I was making the song "Fomotion," so they reflect a lot of the same qualities within them. I always find that my working in one medium intensely informs my making in the other. "Fomotion" is a reference to FOMO, and is a chaotic, hard-pop Pocket Monster EP Bonus track that embodies this 'fear of missing out' feeling. It does this through surrealist cyber metaphors, absurd sounds and beats, and song structure — all under the lens of queer futurism. The editorial looks reflect industrial lingerie and queer dinosaur fetish-wear depicted against barren, crumbling landscapes. With these images and song, I'm thinking about the ever-increasing pace enforced by capitalistic production and social media environments that leave us, queer artists and people in general, feeling so behind in our work that we begin to feel like living fossils of dinosaurs. So in a way, the song and looks are both an embrace and a critique of this crazed feeling, owning the pace at which you create.

How did you go about constructing the garments? What materials did you use?

The olive toned look with grey spikes is made from a flooring vinyl, punched and chain-mailed together with baby pink rings. I often work with incredibly difficult materials — somehow I love making things hard for myself. The thick, rubbery plastic holds form incredibly well, while also being almost violent to wear, occasionally being abrasive to my skin — but a part of that helps me get into my truest self and persona within Vogds. I love working with different textures, sheens, and finishes. In the other fleshy pink look, a lot of that material is also various vinyls or fuzzy-backs of vinyls. Each look is paired with spandex undergarments from my music video "Shark Weak," reimagined with these spiky vinyl variations on overalls. I like the contrast of these tough, industrial materials with the skin-tight sensuality of spandex. Queer futurism is definitely the drive within my practice as a whole, combining my specific gender-fluid, non-binary identity, queer sexuality, radical leftist politics, and avant-garde, maximalist aesthetics. It is to help add to an incredible alternative queer-verse and renaissance that I feel is happening in queer pop music with artists like Dorian Electra, Mood Killer, Weston Allen, the label Futurehood, Mister Wallace, Imp Queen, Ariel Zetina — the list goes way on!