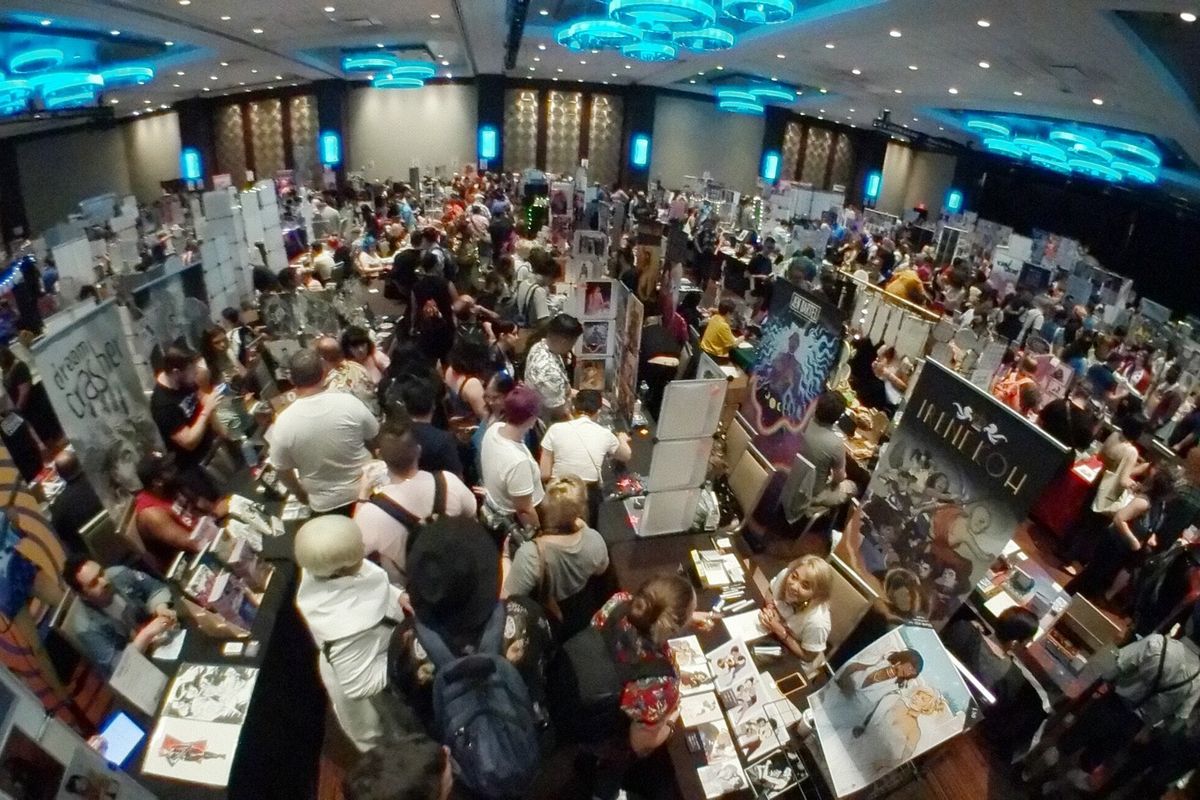 Flame Con is a Utopia for Queer Nerds

The world's largest queer comic convention, Flame Con, is only continuing to get bigger. Returning for its fourth year in New York City, the LGBTQ+ oriented show moved from its home in Brooklyn to the halls of the Times Square Sheraton for the first time this year. Organized by the non-profit Geeks Out, the weekend-long convention bills itself as an inclusive space queer fans and creators alike to come together and celebrate in their geekdom.

Flame Con queers the typical hallmarks of your standard comic con. Panels ranging from "How Sailor Moon Made Me Queer" to "Asexuality in Media" were heavily attended by a sea of cosplayers blurring the gender binary; a Mars Attacks! outfit that looked liked it had just walked off the runway of RuPaul's Drag Race placed high in the costume contest was a notable highlight. Others could be seen talking about merits of fifth edition Dungeons & Dragons versus third edition as well as whether Deadpool and Captain America would make a cute couple.

One of the first performances of the convention, a podcast taping of The Polygon Show, debated what signs would be as video games in a perfect microcosm of the intersection between nerd and queer cultures going on at the convention. Some were unsurprising like Aries is clearly God of War while other notably less obvious; Sagittarius as Tony Hawk's ProSkater 5 took a little bit of explaining.

Later on Cecil Baldwin, narrator of the popular Welcome to Nightvale podcast, gathered a large audience as he read the campiest choose-your-own-adventure novel ever written. Checking off all the cliches of early 200's depictions of queer culture, Baldwin solicited audience participation as the protagonist dealt with radioactive drag queen zombies terrorizing the residents of Fire Island in the pulpy sci-fi tale. It turns out going back for a pair of Prada sandals was a lethal decision.

The vendors hall was filled with as much fan-art of recognizable titles like queer favorites Steven Universe, Voltron, Undertale, Persona 5, and The Adventure Zone as it was with original characters and indie comics that attendees were equally eager to read. The main hall speakers ran through a playlist of queer coming-of-age anthems from Tegen & Sara, St. Vincent, and Carly Rae Jepsen as well as deeper cuts like The Postal Service's "Such Great Heights". I even caught more than a few vendors absent-mindedly lipsynching to Steve Winwood's "Valerie" which was a pleasant surprise.

"The vibe is really comfortable," says Kris, a vendor at the convention, "everyone is really respectful. It feels really wholesome." And the sentiment was palpable, walking the convention floor there wasn't the normal anxious tension and claustrophobia one might get at New York Comic Con or even the pretension of the more indie New York Art Book Fair. The attendees of Flame Con were welcoming and warm, respectful of one's identity and space.

"It's phenomenal to see all facets of the community represented here," said Massive Goods co-founder Anne Ishii, "usually at these kinds of events you only see the 'L', the 'G', the 'B', and sometimes the 'T' of the acronym represented. But here I see the 'Q', the 'I', the 'A' all here too! And not at all in small quantities."

As the convention wore on, glimpses of what queer utopia could look like popped out from overheard snippets of conversation and chance encounters. At a panel on Dungeons & Dragons conducted by queer comic creators, a person in the crowd asked if there were tools available for disabled players having themselves just completed a campaign with an individual who was blind and deaf. Many panelists were at a loss for advice but offered support in connecting the question-asker with other people who might be better equipped.

"People don't really realize how big the queer nerd scene is," Ishii points out, "they're typically introverted individuals so they don't usually come out to big parties and parades but for events like this, they turn out hardcore." The queer geek community has always existed but is seldom catered to. A recent rise in visible queer media representation has helped, with shows like Steven Universe, Voltron: The Legendary Defender, Sense 8, and The Legend of Korra having canonically queer characters is making a difference. Molly Ostertag, author of The Witch Boy and illustrator of the webcomic Strong Female Protagonist, says that this rise in visible queer characters only highlights how important it is to have conventions like Flame Con, "we need indie spaces like this to be trendsetters for the industry. We need queer narratives that focus on more than just 'respectable gays'."

Walking out of Flame Con, my tote bag was significantly heavier than when I entered, with a thick stack of new books, zines, prints, sticker, and pins all featuring very gay content that made my very gay heart swell with excitement. Flame Con underscores the importance of community for queers. Having a space to come together and feel seen is invaluable. Judging from this year's packed turnout, Flame Con will only continue to grow as more and more queer nerds find more reasons to come together.