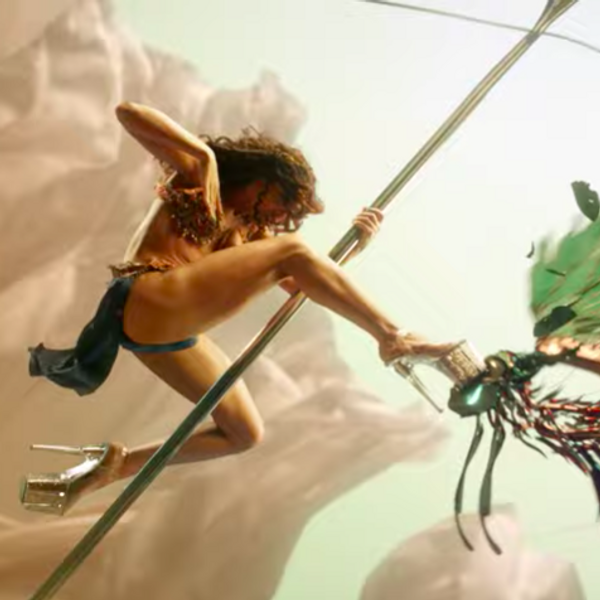 FKA Twigs will soon release her first album in five years, the follow-up to 2014's LP1. The first single "Cellophane" and an accompanying video, directed by frequent Björk collaborator, Andrew Thomas Huang are out today.

"Cellophane" follows naturally from the promises of LP, but reveals a vision of a totally new scale. The song, a masterpiece on its own right, is a devastating piano ballad about devotion that crumples in on itself, the soft yet bludgeoning vocals of which are pleasantly reminiscent of Sharon Van Etten or Angel Olsen.

The film is a four-minute surreal masterpiece that packs the impact of feature length drama. It begins as a gravity-defying, poetic pole dancing performance, turns into a gravity-defying, surreal sci-fi fantasy, and ends with Twigs lying in her 10-inch pleasers in a pool of mud, which two masked figures cover her body in. My best summary A Wrinkle In Time spliced with Suspiria and a one-woman East Village performance art piece.

It's a gorgeous piece of cinema, as well as physical poetry. FKA Twigs took up pole dancing after having six fibroid tumors surgically removed from her uterus, an experience she described as "A fruit bowl of pain everyday." While it's certainly not explicit in "Cellophane," it's not to see its moments of transcendent grace and agony as a visualization of her experience.

"When I wrote 'Cellophane' over a year ago a visual narrative came to me immediately," FKA said in a statement. "I knew I had to learn how to pole-dance to bring it to life, and so that's what I did."

It's better viewed and listened to, than described.

A release date for Twigs' new album hasn't been revealed, but she's announced a set of tour dates starting in May, and will perform at NYC's Afropunk and the Red Bull Music Festival.