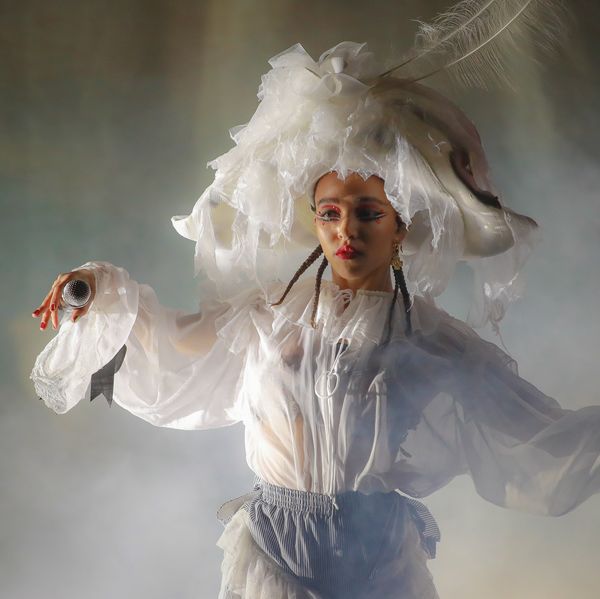 We've had over a month to digest "Cellophane," FKA Twigs' devastatingly beautiful new song and Andrew Thomas Huang-directed video, in which she performs superhuman pole-dancing feats while singing about a lover who makes her feel like she isn't enough. She performed the song live last month, debuting her new theatrical, tour de force 'Magdalene' show at the Park Avenue Armory at the Red Bull Music Festival.

To give fans more insight into Cellophane," FKA Twigs has dropped a Homecoming-style mini-documentary about the making of the song and video, called "Practice," released via WeTransfer. It follows Twigs through her decision to fulfill her vision for "Cellophane," her rigorous training routine, as she learned pole-dancing and other acrobatic arts, all the way to Kiev, Ukraine for the final shoot.

Of course, there's lots of glorious, sweating training shots of Twigs in sports bras, showing how grueling her training to prepare for the pole-dancing performance in "Cellophane." However, even more fascinatingly, "Practice" explains why the singer/actress/dancer decided she wanted to pair her brutally sad magnum opus with such a monumental physical feat.

"Sometimes when I write something that's like, really vulnerable, like 'Didn't I do it for you/ Why don't I do it for you,' like, in the center of myself, I know that that's a very human feeling," Twigs says, continuing: "So when I thought of the video concept, to be asking somebody, 'Didn't I do it for you?' whilst doing these amazing tricks on the pole... there's always something humorous about that. I'm sure that other people won't see it that way, but to me, it's sick and it's funny and it's powerful."

It's remarkable to see the dancer, whose feat in "Cellophane" is so effortless it looks like CGI, pant, fall, sweat and struggle. Turns out, Twigs was just as amazed by what she was able to accomplish, as we were. At one point on set, she watches the video just filmed of her, and says: "I can't believe that's me."