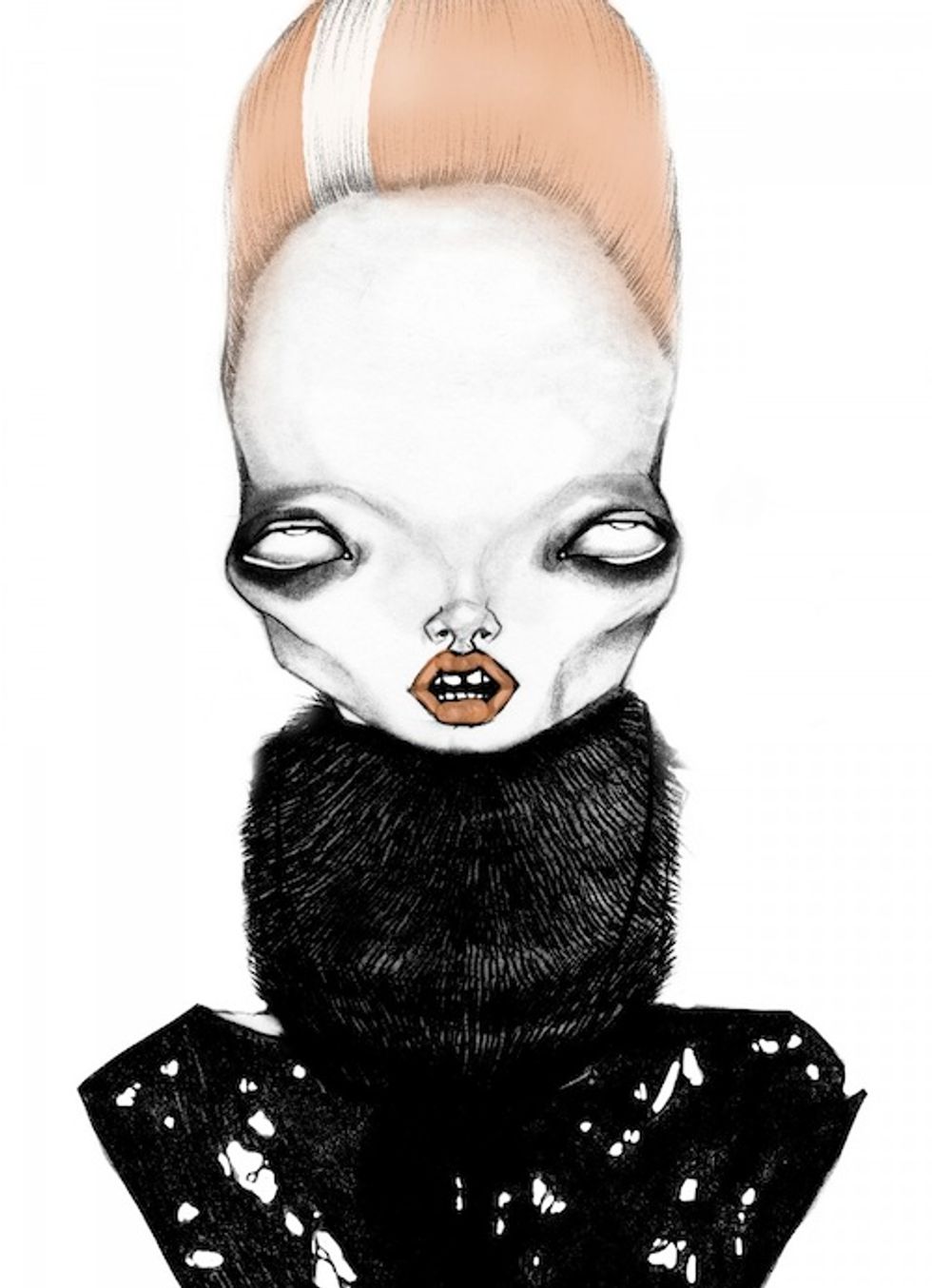 Five Unconventional Illustrators Exploring The Darker Side of Fashion

By Mats Meyer
PAPERMAG
illustrated by Jowy Maasdamme
Awe-inspiring faces, swooning silhouettes, jaw-dropping proportions and an effervescent beauty are often the qualities that contemporary fashion illustrators choose to focus on and capture -- however, the following five artists are among the brave few to leave behind conventional aesthetics in favor of critical portrayals that focuses on the darker side of fashion. So check out their work below, because if you really want to capture the ghoulier side of haunted haute-couture, you'd better call one of these guys.

According to his website, Belgian-born fashion illustrator Achraf Amiri is "the hidden son of the Addams Family." Known for his morbid take on illustration, Amiri's art provides a brutal, yet alluring depiction of the superficiality that surround today's fashion and entertainment industry. His cartoon-like illustrations feature a disturbing yet enticing combination of sex, violence and surrealism that provides a modern criticism to the traditional misconception of what it means to be in fashion. From Marie Antoinette to modern pop icons like Madonna, Prince and even reality star Caitlyn Jenner, nobody seems to be able to escape the madness of this artist's critical eye, though Amiri's biggest accomplishment is probably his ability to transport viewers into his delirious world of dark self-expression, where the frightening becomes inviting and the horrific becomes poetic.

illustration via BigCartel
Connie Lim
California-based artist Connie Lim took the world by storm with her edgy interpretations of Alexander McQueen's A/W 2009 collections. Using fashion as her platform for artistic expression, her goth-inspired sketches feature a striking, edgy undertone that provide the perfect platform for showcasing her unique voice and talents as both an illustrator and fashion designer. For her latest work Deck of Cards, Lim used a range of contÃ© crayons, watercolors, inks and pens to hone in on the characters' emotions, saying that, "I have a personal attachment to the Deck of Cards project...It was a long project that reflects various stages of my life. The first 'Queens' in the series began as a college project but spanned a decade to record experiences and emotions within that time span." And her dedication to this project shows, with each card constituting a unique piece of art that displays Lim's personal ode to the more dangerous and luscious woman.
illustration via Laura Laine
Laura Laine

Using only paper and pencil as her mediums of choice, Laura Laine combines her exquisite eye for detail with an almost unearthly sense of movement and whimsical disproportion. However, Laine's work is not without a sense of animated darkness, a notion that is evidenced by the pale skin and penetrating gaze of her characters. "Even when I draw smiling girls, they're not only happy," Laine explains, "I like it when there's something unsettling and dark about the image and the expression of the character...It's not a morbid fascination but rather an interest in the beauty in something that's not only pleasant, joyful or easy."

This self-taught artist describes herself as "wild-eyed and slightly insane", characteristics she definitely has in common with the eccentric personas her art creates. Inspired by nightmares, punk rock and human vulnerability, Maasdamme's work, although not for the faint-hearted, showcases a hauntingly beautiful meets macabre take on beauty and fashion. Maasdamme characterizes her art as "weird, disturbing, sexy, and beautiful" with an outspoken preference for black and white. "To me that feels natural, simple, like night and day" Jowy explains. With an intriguing juxtaposition of light and dark and a rebellious appreciation for the exaggerated, these enticingly disturbing masterpieces provide an inviting mockery of society's standard of perfection. In Maasdamme's own words: "I am only interested [in fashion] when there's a story behind it. I think a lot of people have stories to tell, share, create... It's just that a lot of people don't have the balls to do so anymore in an authentic manner".

"Messy and neat, focused and scattered, wild and careful, obvious and subtle, traditional and contemporary," is how Ruben Ireland describes his entire life philosophy. This contradictory approach is also a noticeable influence in regards to his art, which depicts mysterious, almost heroic-looking women, carefully displayed in minimalistic environments. Utilizing a mostly monochromatic palette, Ireland says that his work "has more in common with the moon than the sun, although I tend to see them as both joyful and somber simultaneously." And while often merging the human form with mythological elements, Ireland's work meets at the crossroad of realism, dark fairy tales and ancient folklore.
From Your Site Articles
You May Also Like
Internet Culture