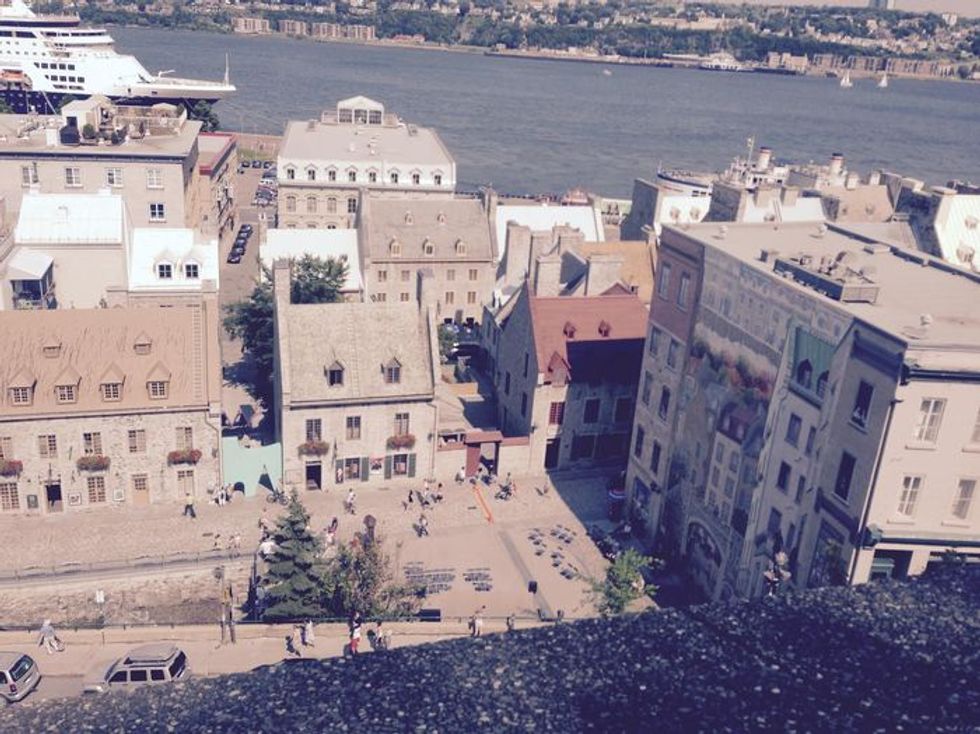 Founded in 1968 and held at the lovely Quebec City, the Festival d'Ã©tÃ© de QuÃ©bec is one of the biggest live music festivals in North. It runs for 11 days in more than 12 venues, and regularly pulls in more than a million audience members. Not being a Canadian, I hadn't heard of it either.

But though it doesn't have the USA clout of Lollapalooza or Coachella, the Festival has a lot going for it, if you're into seeing live music on big outdoor stages with thousands of people but are kind of out by the kids and their EDM.

Located by the sea and imbued with a quaint, European village charm, Quebec City is stunningly gorgeous, though be ready to make like Kate Bush and run up some hills. The people are unfailingly friendly, the (often Rickard's Red) is cheap and smooth, and if you've never had poutine, boy, you owe it to yourself. All of the stages are located within walking distance of each other (but seriously, stretch first before hitting those hills) and the line-up is wildly eclectic. (And yes, there is some EDM in the mix.) This was perhaps the only festival this year where one had to choose between catching Owen Pallett or the Doobie Brothers at either the nearby l'Imperial or the le Grand ThÃ©Ã¢tre de QuÃ©bec stages. (Since the Doobs haven't toured with Michael McDonald in ages, it was an easy decision.)

With a linepup that included the Rolling Stones, Keith Urban, Boston, Megadeth, Jack Ã� and Iggy Azalea, the Festival d'Ã©tÃ© de QuÃ©bec was once again diverse bordering on incoherent. I got to attend for a few days; here were my favorite moments.

1) Playing to a smaller festival crowd than they've been destroying lately, Run the Jewels were nonetheless treated like conquering heroes by the ecstatic, continually moshing crowd. "You bastards, let me catch my breath," said a beaming Killer Mike from the stage, no doubt pleased that even this far up north, people know how to properly do his band's gun and finger salute.

2) Though the new single they premiered that encouraged us to remember our first dance, first kiss and first other things sounded promising enough, Icona Pop are going to have their work cut out for them to avoid the one-hit wonder tag. But that hit! Watching a huge crowd at the main outdoor venue, located on the Plains of Abraham, scream in mass that they! don't! care! and would be very interested in crashing your car is one of those communal feelings you can only get when crammed together with thousands of people at a local park turned venue.

3) Though the big names get the big font on the poster, there was plenty of regional talent filling out the local clubs, including Canadian upstarts the Feather. Though they still need to fine-tune their sound a bit, they're clearly onto something: they can quiver like Bon Iver and swell like early Arcade Fire, and one doesn't even need to speak French to feel the pathos they were offering up.

4) Though I wasn't, unfortunately, able to stick around to watch Primus cover the soundtrack to Charlie and the Chocolate Factory (my loss, I'm sure), I did catch their opener: recently reunited '90s guitar-effects scientists Failure. Up against a torrential downpour and a sound system that literally cut them out a few times, Failure pushed on, turning Fantastic Planet deep cuts "The Nurse Who Loved Me" and "Saturday Saviour" into the arena-filling jams they would have eventually become back in the day if these guys hadn't called it quits right as they were starting to catch on. The pianos on the latter, in particular, encouraged some shameless air-keyboarding.

5) Is Future Islands frontman Samuel Herring the best dancer of our time? Don't bother answering: of course he is. Whether he was doing the "drop and pop" or the "spastic Magic Mike" or the "punch a hole through the space-time continuum" he gave the crowd more energy than they could handle and constantly made me forget there were three other people on stage with him. (All of whom I'm sure work very hard at their jobs: those beautiful whirs on "Spirit" don't play themselves.) Oh yeah, those moves were soundtracked by "Seasons" (Waiting On You)" and other songs that didn't break the internet but prove that there is much more to this group than one of the most magnetic personalities in recent memory.