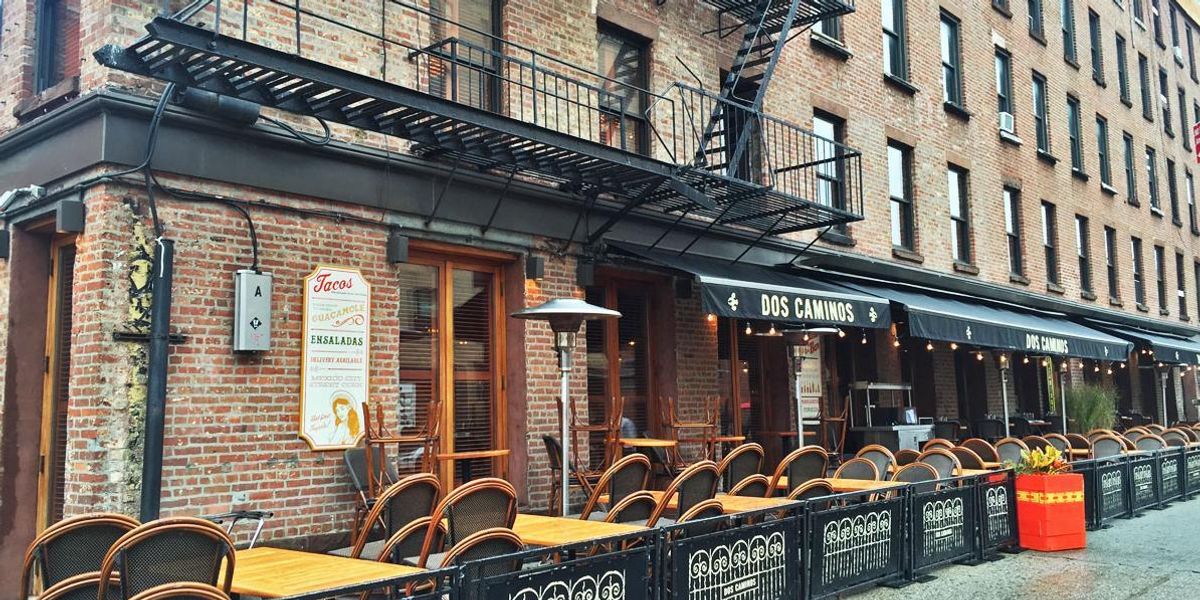 "Beware of the cream sauce!" is my familiar cry when it comes to NYC's fancier restaurants. After all, a whole bunch of these chi-chi eateries happen to be on the sites of places that were way more raunchy, back in New York's fabled past. Here are some upscale boîtes (and other establishments that tourists flock to) that used to cater to downscale…well, you come up with a rhyme.

Delicious Mexican food, swanky patrons, and lovely outdoor seating all comprise the success story that is Dos Caminos. But did you know that at this Meatpacking hangout, meat used to be seriously packed? The place used to be the Vault -- the hardcore S&M club where CEOs got whipped and waxed until 1997. There are also two other Dos Caminos restaurants in Manhattan, and only Shirley MacLaine can imagine what they were in a past life.

"We shared one of the coolest drinks called a goblet that had gummy bears in it and had dry ice fog coming out of it!" gushes one Yelp respondent about this cutesy eatery. Another one recommended "a Rice Krispie treat with icing on top and a sparkler." Quaint, no? But from 1977 to 1985, this place happened to be the Mineshaft, the most notoriously raunchy gay sex hangout of all, where studs congregated around the communal bathtub to relieve themselves on a willing slave. And it wasn't because they'd had too many Rice Krispie treats!

Swanky Chinese spot Jue Lan Club joins a genteel assortment of accessory, scent and gelato boutiques in this multi-story mall, but back in the '80s and '90s, it was the nightclub the Limelight, the mecca for raucous clubbies on drugs and occasionally on their knees. The stuff you saw in the stairway alone! This location definitely has range (and I hope has been seriously fumigated).

Yes, this is a sexy hotel, where you can apparently rent by the hour, but it used to be way steamier than that. From 1974 to 1986, it was the multi-level gay sex bar the Anvil, where you were afraid to raise a fist at anyone, for fear it would somehow end up in their butt. Ah, the memories.

Sandwiches, wine, and dancing are the key elements at this perfectly delightful Meatpacking pub. "And clean bathrooms!" exults someone on Yelp. That's ironic because it used to be the Toilet, a naughty gay dungeon that totally lived up to its name. Beware of the cream sauce indeed!