Finding Love On the Internet 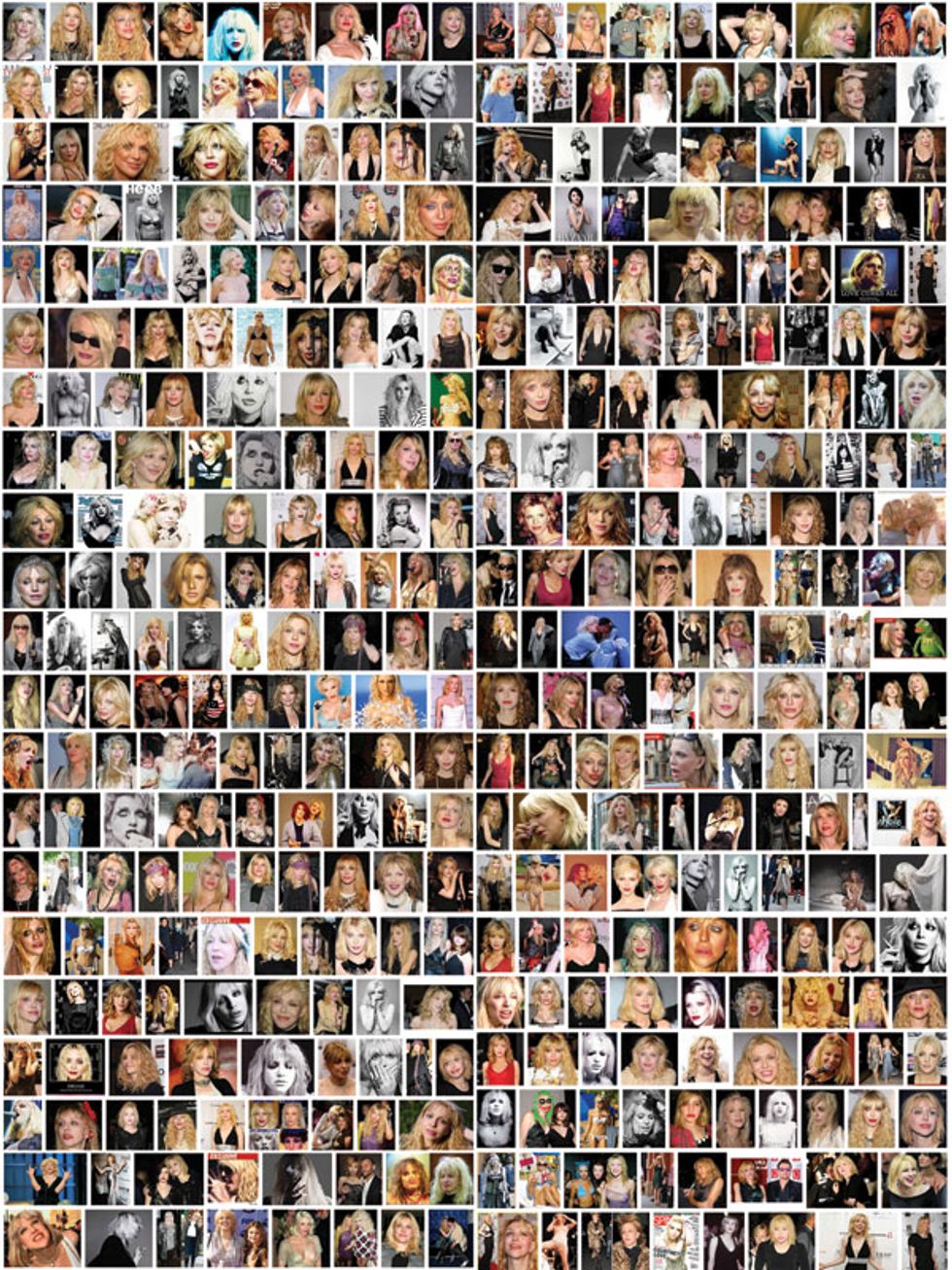 Courtney Love's been online for years, writing on AOL message boards in the '90s, keeping a blog on MySpace, and, more recently -- and infamously -- using Twitter. (Last month, Love took to Twitter to accuse Dave Grohl of hitting on her daughter, Frances Bean Cobain. She later tweeted an apology to Frances.) After seeing a video of Love speaking at the Guggenheim earlier this year, in which she mentioned Googling herself, we wanted to know more about how she deals with her Internet presence. Here, we ask her about it in a whirlwind interview.

You have two Twitter accounts, one public and one private. The bio on your private account says, "As long as I don't use this when I get pissed off, we'll all be fine." [Ed note: Love's private account was deleted after press time.]

CL: Yeah, well, I'm not a social network genius, as evidenced by being the first and only person ever to have a Twitter lawsuit. At the time that lawsuit happened, I didn't even really fully get what Twitter was for or how it worked.

I know this investor guy who's very serious about Twitter and he lectures me like, "Oh no, you should only tweet on certain days at certain times, and you should only have a certain amount of people who can follow you and a certain number of people you follow." What? There are so many rules.

CL: I have a girl who helps me with it. I can't do that by myself. Sometimes she does dumb things, though. Like, if I want to work with Cobra Starship, I'll ask them. I sent her an email about what I wanted her to write back to them, but she still put something dumb like, "Hopefully we can work together some day!" If I want to kiss some ass, I'll kiss some ass. Don't go kissing ass for me. I'm snarky -- that's part of who I am. I was like, "Look, dude. Just pay attention. It's nuanced."

Do you ever think about blogging?

CL: I met these girls from the arts and style section at the Huffington Post and they asked f I was interested in blogging. I was like, "Yeah, if you have Arianna call me." And you know what? She's pretty smart because she did call me. So I might blog for them under the benevolent Hellenic gaze of Ms. Arianna. I can't write and I'm bad with grammar, but they said that they'd get me an editor. And I do need an editor. I need to write beautifully, and I just can't on a Mac. I can sit down with a pen and write a beautiful letter. But if I get on a Mac, it's just all one long sentence. It reads like Spy magazine from 1987 with commas. I've read like three pages from The Elements of Style and it said, "Omit unnecessary words." I ignored that. So then I got a book called The Elements of Fucking Style, a parody. That book, I finished.

You spoke at the Guggenheim recently and mentioned Googling yourself. Not a lot of people are honest about doing that.

CL: Well, no, I don't really do it that much. I haven't Googled myself in almost two months. No way. I make other people do it. That stuff is just so dark. My online persona is a disaster -- that's not me. You can ask for help from these companies that supposedly remove stuff from the Internet for you, but they're hilarious. [One company] was like, waiting for me when I called. They said they were going to charge me $250,000 per one page of results. A quarter-million dollars per page? Are they joking? I met this hedge fund banker guy who actually paid their fee, because he can't have anything bad about him out there. I'm in entertainment, I can take all the shit you throw at me to some extent. But $250,000 to alter the crap out there about you on the Internet is just absurd.

What's online that bothers you?

CL: It disturbs me the way image search results for me come up. One of the top photos when you do a search has always been one-half of my face and one-half of Britney Spears' face. Another top photo, I swear to God, is doctored. I'm not even on drugs in that picture.

CL: I was in London. All I'm doing is walking from the Covent Garden Hotel in London to the Groucho Club and working some denim flares. I thought it would be cool to buy these stupid contact lenses that looked like Marilyn Manson's. So I have these really scary contacts in, and it looks like I have herpes on my mouth or something. My lips might be chapped, the photo might be doctored, I don't know. And usually I take an OK photo!

And it's disturbing because it's what you get first in a search result?

CL: Listen, nobody wants to see ugly pictures of themselves. But why are these photos of me that are so bad and so high up in the results fed from these dinky little websites? These sites are all so random and don't really seem to be about anything when you click on them. They're all like, based in Estonia. And, in that sense, I don't even really think that Google is all that reliable. It has its own culture, style, and intelligence level based off its own algorithms, but the rhythm and the coding changes all the time for better or worse. So when you Google someone, what you find is not the gospel truth.

You think people should be savvier about what affects search results...

CL: The context of Google, to me, is useless. Let's get smart. Because, in the end, there's also this: Is it possible to fall in love with someone you cannot Google? I believe it is. And better for it. I only care about what's in the eyes and in the heart. Google does not run the world -- or my world. And if I ever get [Google co-founder and CEO] Larry Page in a room, and he will no longer be able to resist my charm, we will change a few things.

But you know what? If you don't control your own destiny, no one will, and that's why I spent like 18 hours one day trying to figure out what was going on with my Wikipedia page.

What's going on with it?

CL: My Wikipedia is frozen. Apparently everyone else who has a frozen Wiki is dead. That includes fascist dictators. I was like, "I'll just write my own biography. This is stupid."

Is there anyone in the media world whose opinion you care about?

Is that a big difference you've noticed since you moved from Los Angeles to New York? The media here?

CL: New York is media. It's a media culture with media clout. You're forced to be around it more here. And you're also forced to be around people. You can't just stay in every night here. You have to go out. I moved to New York at the end of '09 and the first thing I did when I was here was have lunch with Richard Johnson before he left "Page Six." He gave me a great piece of advice. He said, "Never start a fatwa with anyone in Manhattan, because it's only 24 square miles and you only want to live in four of them. And you're always going to run into that person again." In L.A., it's different. You can just hide behind your big gate and yell, "Fuck you, Billy Corgan!" Or whatever. In New York, you just can't do that, and that's kind of great.

A collection of Courtney Love's drawings, And She's Not Even Pretty, opens at New York's Fred Torres Collaborations May 3rd and will be up through June 15th.