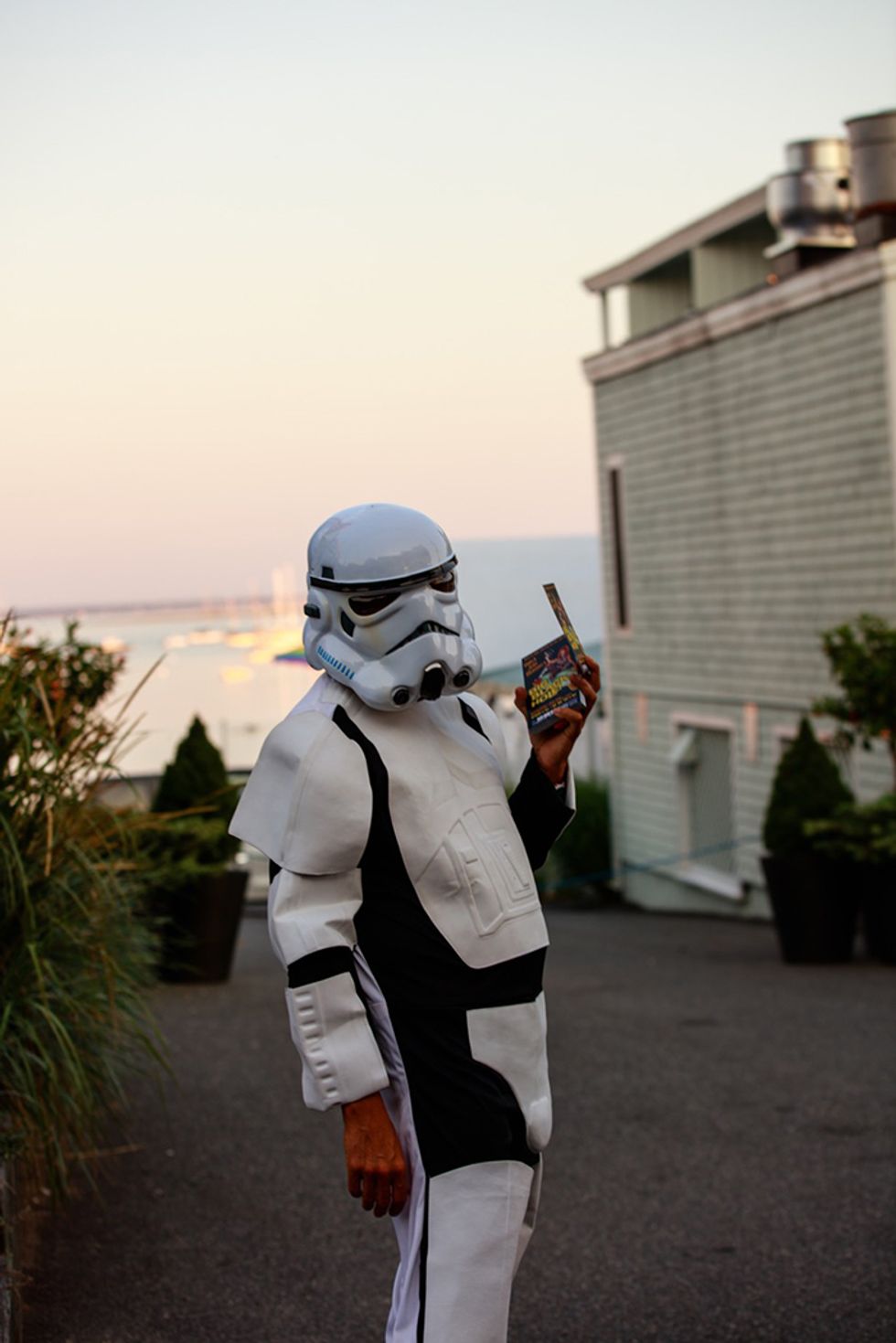 Filmmaking on the Edge: History and Highlights from The Provincetown International Film Festival

by Rodney Uhler / photo by David Macke
PAPERMAG
Photo of a Storm Trooper walking through Provincetown
Major film festivals, like Toronto, Sundance and Tribeca, started with mission and community-driven ideals -- bringing new films to a local audience, or encouraging independent films -- and while the heart of those missions may still ring true, they can be overshadowed by media and celebrity attention. The Provincetown International Film Festival, even after 17 years seems to somehow be able to both genuinely serve and be supported by the community while attracting big ticket films and guests. The 2015 festival, which drew their biggest audience yet, took place this past June, and the new Patricia Clarkson and Ben Kingsley film, Learning to Drive, took the top Audience Award.

The success of the festival can be attributed, in no small part, to the dedicated staff leading the organization including their long-standing Artistic Director, Connie White.  We had the chance to chat with White and get a brief run-down about how the festival got started, what we may have missed and what's to come.

How did the festival come about? Did it start with a mission or guiding principle?

In 1999 a group met to envision a film festival weekend on what was then the "shoulder season" of a resort town. While most of the local businesses such as inns, restaurants, shops, are open and fully staffed by Memorial Day weekend, the crowds didn't really return en masse until July 4th.  A number of local movers and shakers were encouraging locals to plan event weekends during June and September, while the crowds were less overwhelming, yet most businesses were 100% up and running.  I was one of a few people brought in to consult on this "start up" and, well, the rest is history.

How would you describe the festival's relationship with the town itself?

It's pretty great! The town and businesses appreciate the art-savvy crowd who come in droves for the festival and they in turn support the festival contributing in-kind or discounted housing for the filmmakers, restaurants provide meals, the ferries and airlines provide vouchers -- and the town itself, through tourism funds and other granting opportunities, also offers financial support. There is a tremendous amount of support across the board. It wasn't always as plentiful as it is now, but after 17 years of hosting a great event, I think we all recognize that mid-June has become a destination week now due in a large part to the festival so everyone really seems to be on board and wants it to survive and thrive.

Is there a quintessential Provincetown movie? If someone were to prepare for a trip by picking out a movie, which one should they watch?

We opened the festival in 1999 with Run Lola Run and I still see that as setting the standard for artistry and vision for the festival selections. And, of course, anything by John Waters -- it's hard to pick, Polyester or Female Trouble? A highlight for me was showing Serial Mom a few years back at the local Drive-In with Kathleen Turner in person.

What were some of the highlights from this past year?

Everyone pretty much says "the films, the films, the films." The 2015 festival happened to be a year where there were some strong submissions that were very specific to Provincetown -- such as Packed In A Trunk, Outermost Radio and Clam Bake... But in addition we had packed, enthusiastic screenings of Grandma, Tab Hunter Confidential and Larry Kramer attended our screening of Larry Kramer in Love and Anger.  A real highlight! Plus tributes to filmmaker Bobcat Goldthwait and actor Jennifer Coolidge.

The festival has been a great champion of independent film. What are some of the most notable premieres or directors that have come out of PIFF?

We are really fortunate to have filmmakers John Waters and Christine Vachon on our advisory board right from the early years, and they have encouraged a lot of their friends and colleagues to attend over the years, which has brought us amazing directors attending like Gus Van Sant, Todd Haynes, Jim Jarmusch, Mary Harron, Darren Aronofsky, and Quentin Tarantino, who have been crowned with our annual signature "Filmmaker on the Edge" Award. And, actors Tilda Swinton, Jane Lynch, Gael Garcia Bernal and Parker Posey are just a few of the exciting actors who have attended and received our "Excellence in Acting Award."

What's next for the festival?

Year 18 is next!  We keep doing what we do -- "Filmmaking on the Edge" is our motto -- and we all intuitively know what that means, but to clarify a bit -- we continue to program films and bring filmmakers who push the boundaries, take chances, are adventurous, what we call "the edge" and we are all out here on the Edge of the Continent. Provincetown is really out there geographically and creatively and we celebrate all of that!

The 2016 Festival will run from June 16 - 19 in venues across Provincetown.
More information on the Provincetown International Film Festival, Film Society and some of the film mentioned above can be found at: http://www.ptownfilmfest.org/
For more on Provincetown, check out PAPERMAG.com/ptown
You May Also Like
Fashion