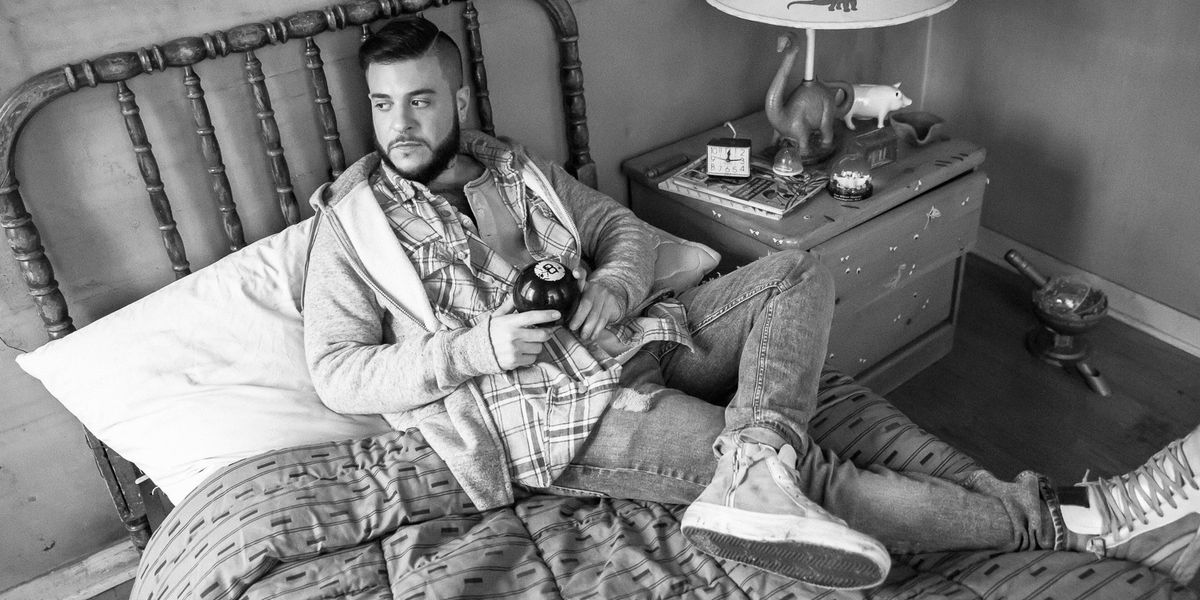 Ferras is 'Coming Back Around' to His Roots In New Video

Ferras is "Coming Back Around." The singer-songwriter, who's responsible for co-penning a ton of major pop hits, from Katy Perry's Witness single "Bon Appétit" to Adam Lambert's "Two Fux," is back with new solo material that revisits his piano roots.

"I know life is a battle ground/ Every bruise I wear like a crown," Ferras sings proudly on the chorus. "Tell everybody now that I'm coming back around." It's a self-reflective anthem that speaks volumes to the weight of the world, right now — but it's also reflective of Ferras' personal journey navigating the music industry.

In 2014, he dropped his debut self-titled EP off Katy Perry's label UnSub, which included unsung standouts like "Speak In Tongues" and "Champagne." Despite Perry's support, and an opening slot on her Prismatic World Tour, Ferras' solo career has been slow-burning. He took some time to rethink his sound, dropping two singles in 2016, "Closer" and "Medicine," but has largely stayed behind-the-scenes until today.

Learn more about Ferras, and watch the PAPER premiere of his "Coming Back Around" video, below.

You've written for so many artists. When it comes to your own music, what story do you want to tell?

I think when I write for myself, I have to be in a place of having something to say. It has to directly come from things I'm going through or it doesn't feel authentic. I think that's one reason I don't just put music out constantly (perhaps to my detriment). When I write for other artists, it's easier for me because I'm listening to the stories the artist will tell, and those are their stories, and I'm just there to help put it all together. For myself, I'm really precious about the material I put out. I want people to be able to hear my perspective, and sometimes it takes a lot of life experience for me to get that perspective.

What's the story behind this new song? Is it based on personal experience?

"Coming Back Around" is my story. It's the story of someone who somehow always manages to get the carrot dangling in front of his face and for some reason, when it's time to actually get a bite, the carrot disappears. Not to sound "woe is me" — actually the contrary. This song is about the fact that no matter what happens, good or bad, no matter how long I disappear, whatever bullshit life throws my way, I never give up. I can't give up — it's not in my DNA. Sometimes you don't know how exactly you're going to get to the finish line, but as long as you get out on the track and start running, you'll get there one way or another.

Why release this song now? What impact do you want it to have?

I feel like a lot of people can relate to being the underdog in a way. I've always sympathized with people that felt way, because I have been so much in my life. I want this song to be an empowerment anthem — a song of triumph for people that feel like they have so much to offer, but sometimes get overlooked.

Related | Sarah Hudson's 'Songs From the Sea' is a Mesmerizing Odyssey

You worked with a lot of amazing people on this track, from Sarah Hudson to Allie X. What was the collaborative process like?

This day was amazing. I remember when we wrote "Coming Back Around." I was sick and on DayQuil, and was feeling pretty shitty. I really wanted to do something very singer-songwriter-y. We pulled up some Tom Petty (who I'm a massive fan of) to get some inspiration, and it must have worked because "Coming Back Around" was birthed. I love Sarah Hudson and Allie X and Scott Hoffman (Babydaddy from the Scissor Sisters), and they're massively talented humans in their own right. It was a wonderful marriage of energies. After the demo, I took the song to one of my favorite producers on the planet, Greg Wells, and he loved the song and ended up producing the final version.

You've released this track through UnSub Records, which was founded by Katy Perry. How involved is she in your solo work?

Katy is one of my best friends and someone I have always had immense respect for as a person and an artist. She's a mentor, a supporter and her input is always really constructive. She's my label head, and she has created a label for artists that she supports to get music out into the world.

Is this track reflective of what's coming next?

This song brought me back to my piano roots. I think the piano is basically like an extension of my body, so it's always present in some way even if we dress it up with synths or other things. There are so many different sonic textures I've been playing with over the last year and it's all pretty different to be honest.