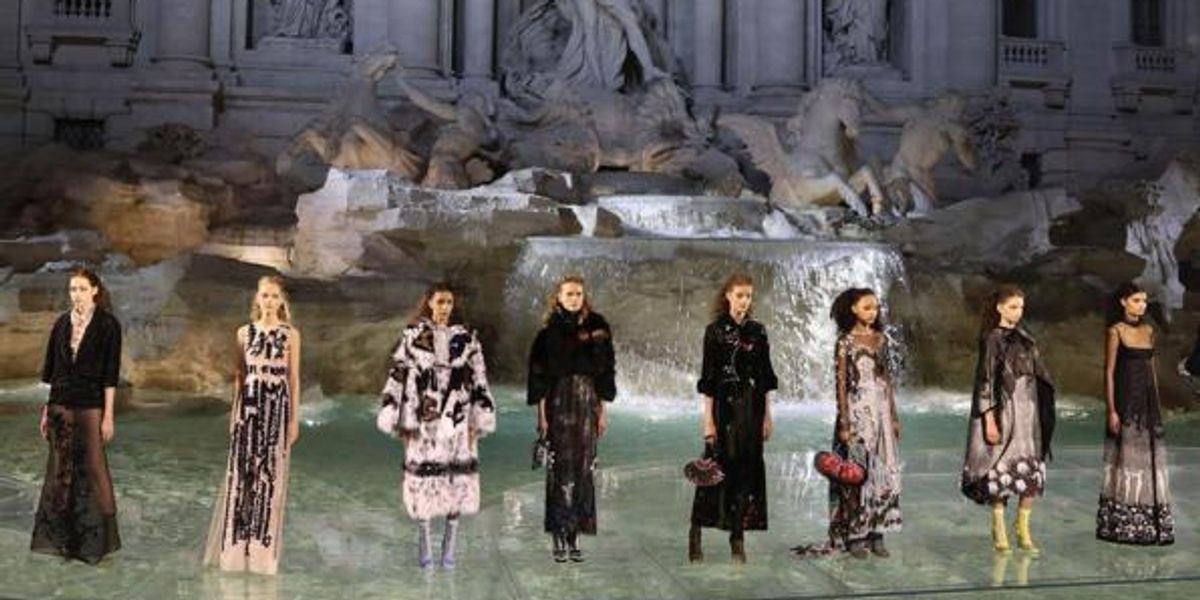 Fendi Turns 90 at the Trevi Fountain

Fur is perhaps not at the top of one's mind in the middle of July, but it was front and center at the Eternal City's iconic landmark last night. To celebrate their 90th anniversary, Fendi flew the fashion flock by chartered plane from Paris as the the couture shows ended to Rome for the birthday extravaganza that featured fairytale inspired minks and gowns. Lagerfeld favorite Kendall Jenner opened the show in a lavender embroidered astrakhan coat and a parade of lithesome princepessas followed in a parade of romantic and technical wonder, the aquamarine pool of the freshly renovated fountain a dazzling backdrop for the haute fourrure looks. And to keep the reality tv spawn circle remaining unbroken, Bella Hadid closed the show in a dramatic enchanted forest themed cape—honestly these furs were insane.


Guests were also invited to gram to their hearts content in a mirrored room strung with the brands now ubiquitous bug charms, with the official hashtag #legendsandfairytales. Among the celeb attendees were Kate Hudson, in azure chiffon, as well as Maria Grazia Chiuri and Pierpaolo Piccioli fresh from their own couture show for Valentino in Paris the day before (Chiuri's appointment to Dior was made official just this morning).

With such an outing for its 90th, how will they ever top it for 100? Lest we forget Fendi's jaw dropping (pre-recession) show at the Great Wall of China. Italian brands with Roman origins, like Fendi and Valentino, have been making use of the city more in recent years, its rich history and dramatic backdrops ample material for the kind of fashion storytelling designers favor. And who knows what fashion will look like when Fendi marks it's centennial? Perhaps a trip to Mars, in honor of Rome.

#Regram from @Kendalljenner who's literally dancing on water at the Trevi Fountain, one night before our epic #LegendsandFairytales show. #Fendi90Years
A video posted by Fendi (@fendi) on Jul 6, 2016 at 3:12pm PDT


Once upon a time, princesses adorned in lavishly embellished gowns danced across an enchanted fountain. #LegendsandFairytales #Fendi90Years


Lace, organza, feathers and hand-created embroideries are combined in the most magnificent ways. #Fendi90Years #LegendsandFairytales


The stars in the night sky twinkle and come to life. #LegendsandFairytales #Fendi90Years


As in the pages of a storybook, a fairy princess emerges from the waters. #LegendsandFairytales #Fendi90Years