As soon as guests entered the venue for Fendi fall 2019, it was clear that this was a tribute to Karl Lagerfeld, who recently passed away. Illustrations in memory of the designer were left on every seat, and the show notes read: "In his perpetual search for beauty and innovation, Karl's commitment to his craft never waned." With that said, tailoring, laser cut leathers and fanciful details like oversized bows were all there. The show ended with a moving tribute to Lagerfeld in the form of a video of him sketching. Here's everything else you need to know about the collection. 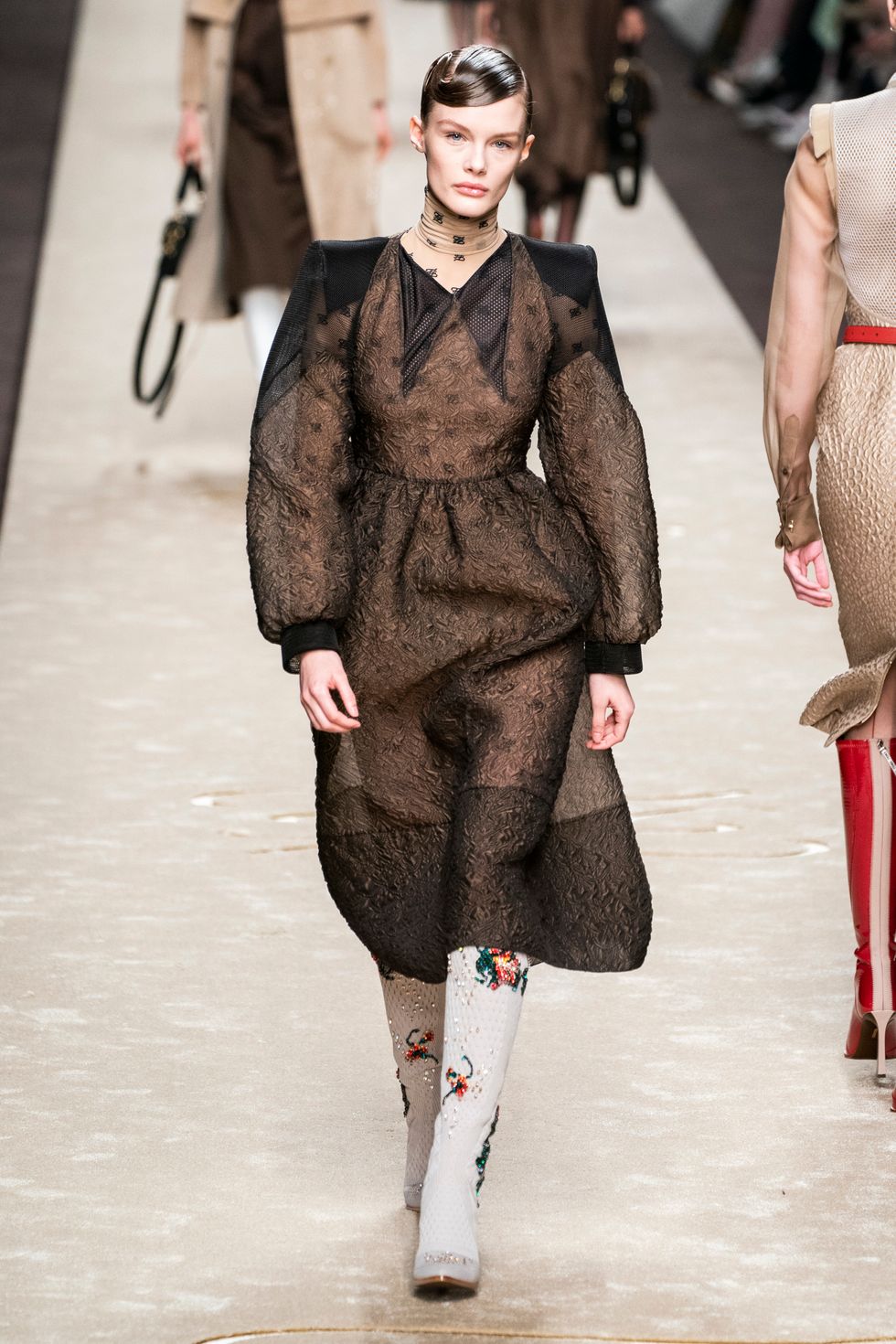 Lagerfeld designed the 'Karligraphy' FF logo for Fendi nearly 40 years ago – and it still remains a signature of the brand. At the show, it was seen on buttons, sheer tights, lightweight turtlenecks, and gossamer thin blouses. 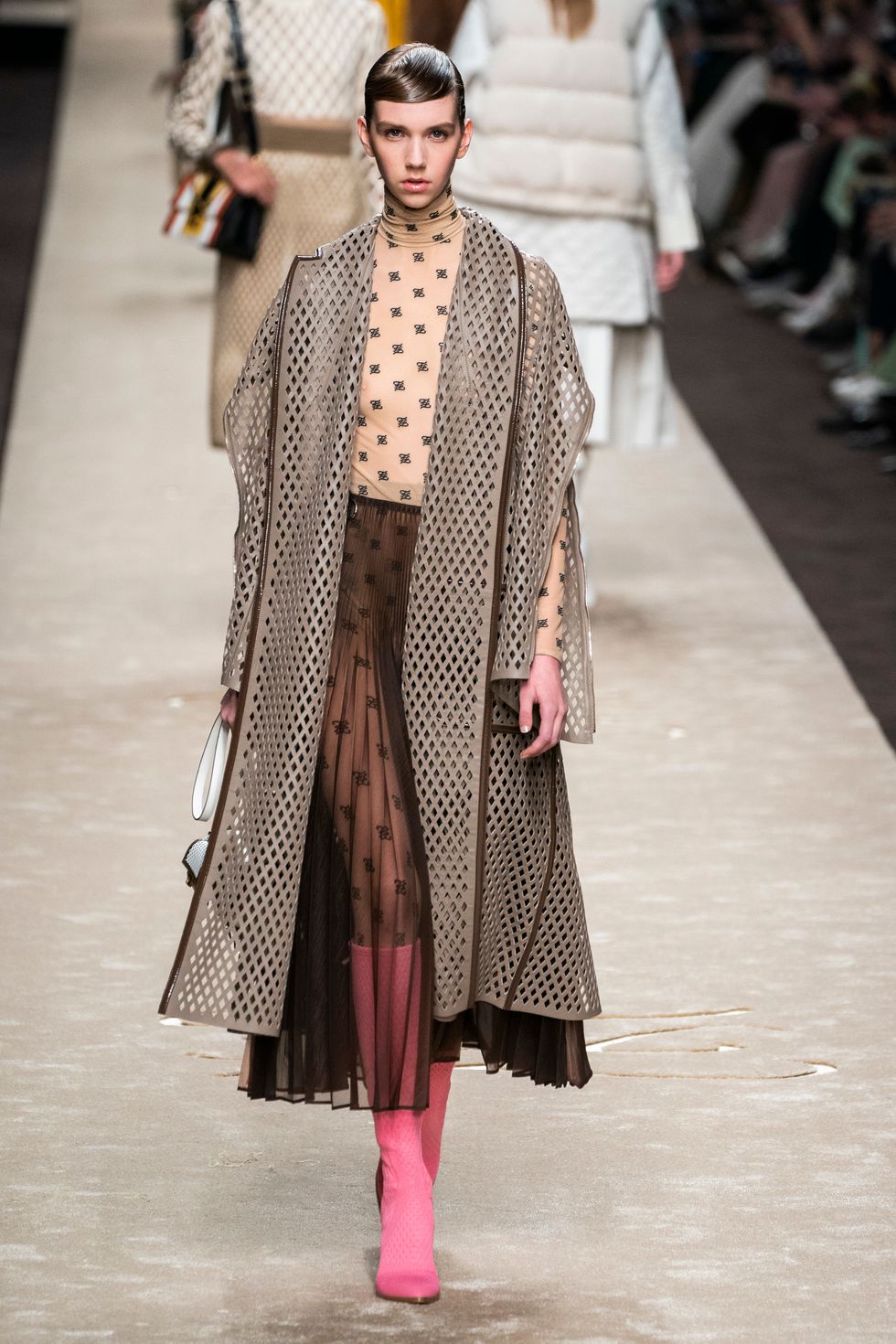 The most interesting texture within the collection were the pieces made of laser cut leather. A sunny yellow coat featured the technique on the pockets, white shirt dresses were constructed out of it as well as long coats and skirts.

All in the Bag 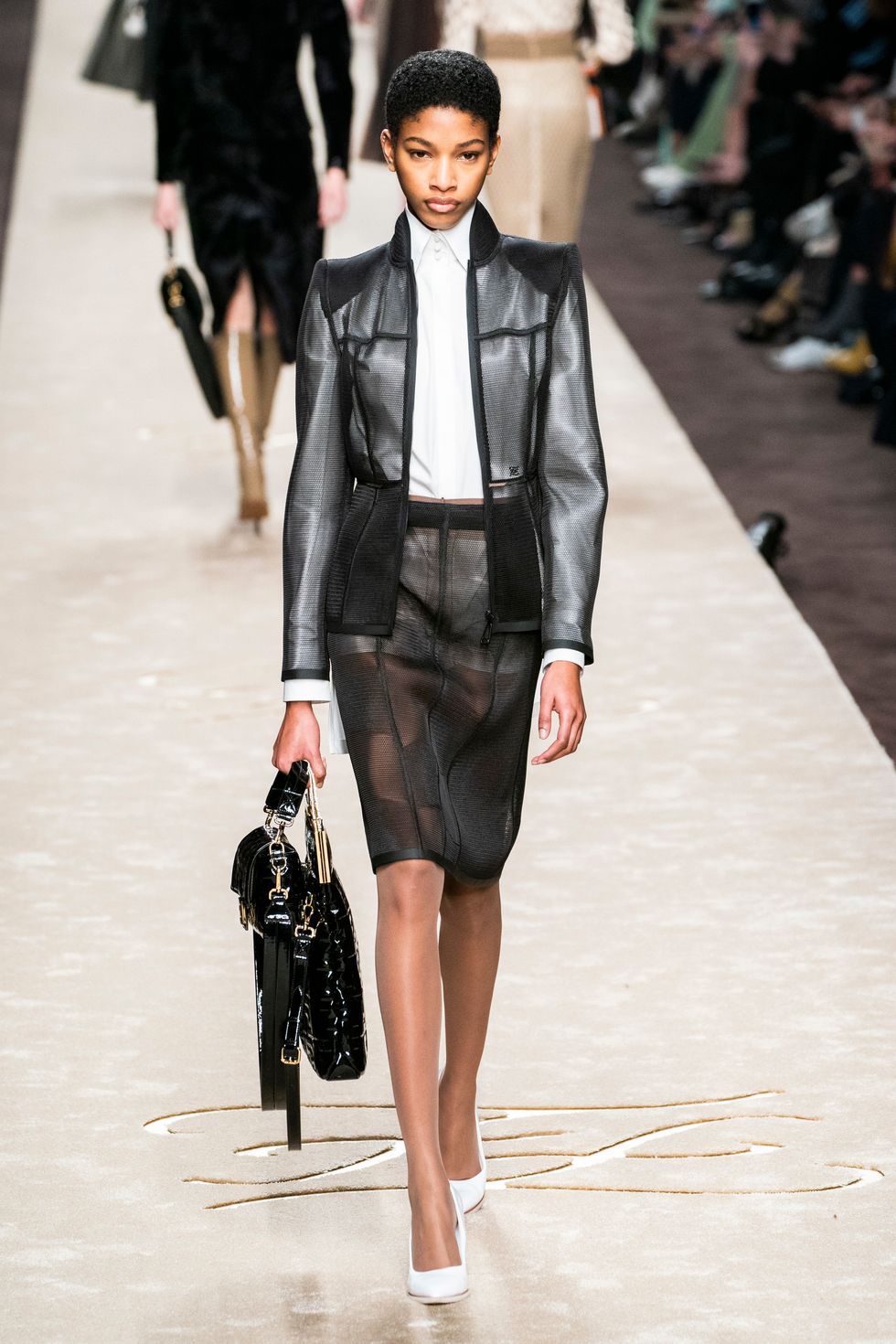 Many of the signature bags in Fendi's accessories collection got updates. The baguette, for example, came embossed with multiple straps. Totes were large but folded into clutches. Bags appeared to be doubled up on the runway so that some models looked like they were carrying mini bags alongside normal top handle sizes. 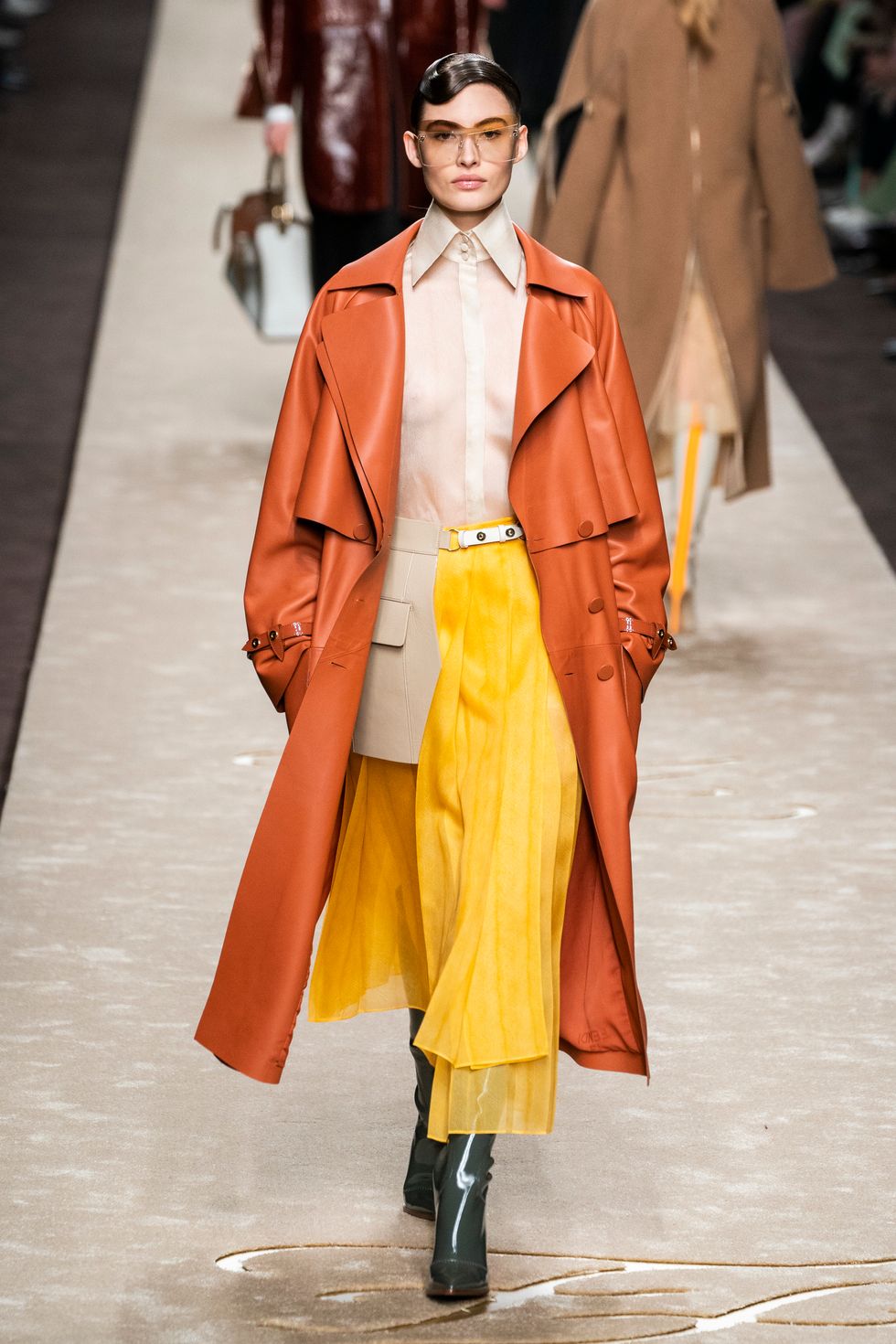 Patent struck out as the most statement-making texture when it came to leathers. Plenty of patent boots were shown as well as a glossy shearling jackets in yellow and maroon, a vibrant green patent skirt — plus shiny bags. 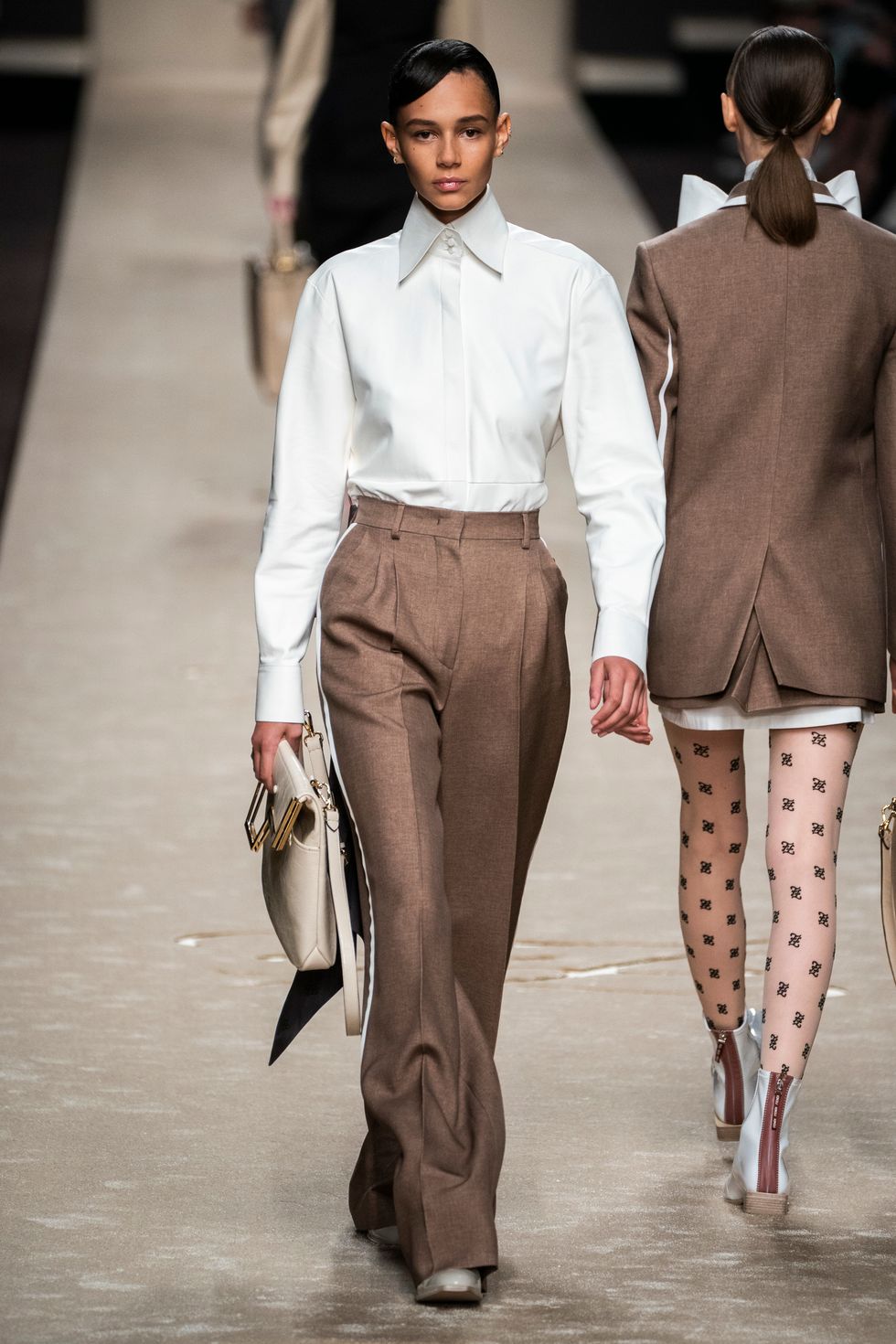 It was also an exceptional collection model-wise. Adut Akech, Gigi and Bella Hadid, Kaia Gerber, and Binx Walton all walked down the runway. In what was an extremely emotional show, Walton wept during the finale.

This Light-Activated Coat Stole the Show at Fendi