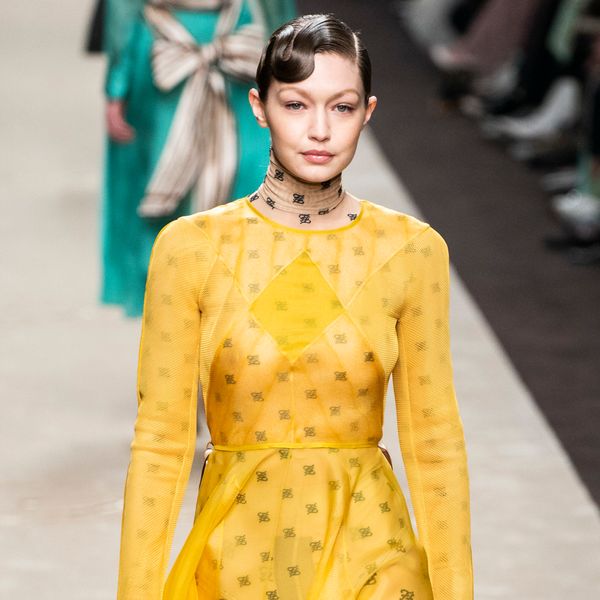 The Fendi Show Was a Touching Tribute to Karl

Karl Lagerfeld passed away on Tuesday, but his work lives on. Lagerfeld served as the creative director at Fendi for more than 50 years, and at the house's show today in Milan they delivered a fitting tribute.

Silvia Venturini Fendi gave a statement: "The bond between Karl Lagerfeld and Fendi is fashion's longest love story, one that will continue to touch our lives from years to come. I am profoundly saddened by his passing and deeply touched by his constant care and perseverance until the very end. He shall be so missed."

There were numerous nods to Lagerfeld throughout the space. "Love Karl" was printed above the runway in his own handwriting. Every chair included a card with a small heart Lagerfeld drew, his signature and date of his passing on the back.

The models — including both Gigi and Bella Hadid, Adwoa Aboah, Lindsey Wixson, and Kaia Gerber ± wore low ponytails and starched collars in homage to the designer. And the mood was appropriately somber; reporter Matthew Schneier posted that he thought the models were holding back tears.

From Karl’s final show for Fendi. I could be mistaken, but it looked like a few of the models were holding back tea… https://t.co/UnTl41vKbf
— Matthew Schneier (@Matthew Schneier)1550751561.0

After Gigi closed the show, Fendi elected to play a video of Lagerfeld sketching a look, from memory, that he had designed all the way back in 1965. They posted the video on Instagram with a caption that read, "A heartfelt tribute to Karl Lagerfeld, Fendi's Ready to wear and Couture designer for over five decades. Karl, you will be dearly missed."

Chanel will show Lagerfeld's final collection for the house on March 5th in Paris. There better be some leather gloves.