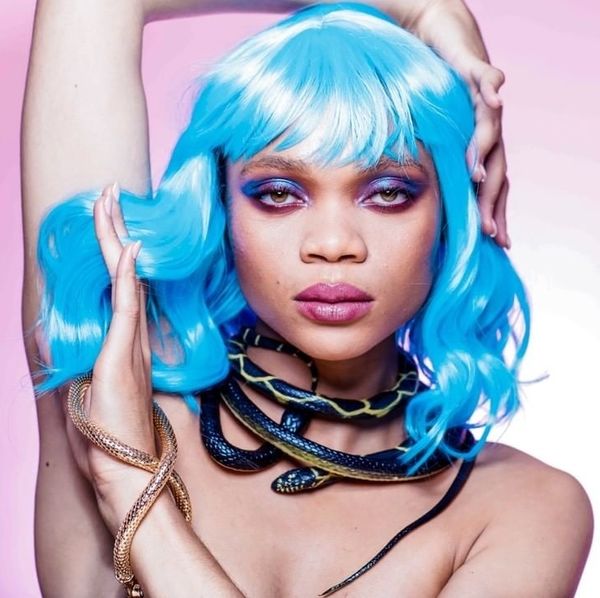 Things are slowly shifting, but the beauty industry still largely caters to women. Despite this, it's consistently — much like everything else — dominated by and filtered through a cis male lens.

Fempower Beauty, a newly launched beauty label, aims to challenge the landscape and rewrite beauty history through a "matriarchal lens." Born out of deep desire to give back and reshape the way we consume and tell stories about beauty, founders Alexis Androulakis and Christina Basias banded together to create their brand.

Androulakis, a seasoned makeup artist and product developer, and Basias, a former high school teacher, came up with the idea for Fempower after the Women's March in January 2017.

"I found it a little wild that a multi-billion dollar industry dictates what it means to be beautiful and is still controlled by men," Basias said. "As we dug deeper, we realized that it's been this way in many aspects of our lives — from the pink tax on feminine product down to the history of the technology we purchase — many of the stories we know have been told through a primarily male lens."

To challenge this, both founders felt we needed to go back to the" beginning of time" to the story of Adam and Eve — "the ultimate archetypal story of the patriarchy and the beginning of this trend," as Basias explained. "The more research we did, the more we realized how we need to bring this story to light in a new way, and re-negotiate the emotions of these characters through a Fempowered and matriarchal lens. We wanted to reclaim the narrative."

For the initial run, the brand launched a capsule of four "future-forward" Virtumatte lipsticks, each named after the characters of Genesis: Lilith, Serpent, Adam, and Eve. Made in Italy, the products are crafted from ethical waxes, coconut oils, and are formulated to keep your lips hydrated and nourished.

"We hoped to match with the tastes and preferences of femmes who were seeking the marriage of comfort and explosive vitality in color built into a lasting formula," Androulakis said. "Ultra balmy, vitamin depositing and pigment perfecting were high on the list of desires that we shared with our Italian supplier. Finally we sprinkled in exotic berries so sweet, they could invariably transport you to the garden of Eve. We wanted these emotionally activated lipsticks to make you feel in a way no lipstick ever had."

At $32 each, owning the lipstick comes a significant price tag. Androulakis and Basias, however, said there is a valid reason for the steep prices. About 10 percent of their overall profits goes towards the education, advocacy, or empowerment of women. For this, they've partnered with organizations, chief among which is Dignity not Despair, a non-profit org that donates makeup and hygiene products to female refugees.

"I found it a little wild that a multi-billion dollar industry dictates what it means to be beautiful and is still controlled by men."

The idea stemmed from their time volunteering as humanitarian aid workers at a refugee camp in Greece, which led them to realize even in extreme poverty, something as simple as putting on makeup was an empowering act for women.

"Rather than defining it to a tee, we have a few different ways we want to give back," Basias said. "One is that we are offering people to gift lipsticks to femme refugees through the organization Dignity Not Despair. We'd love to throw fundraisers and partner with other organizations in unique ways. For the proceeds portion of our give back segment we envision including our community on the decision since they were the ones that helped build our platform for catalyzing such change in the first place."

The Genesis Collection is now available to shop here as the brand set their sights on Korea and Japan for their next launch.