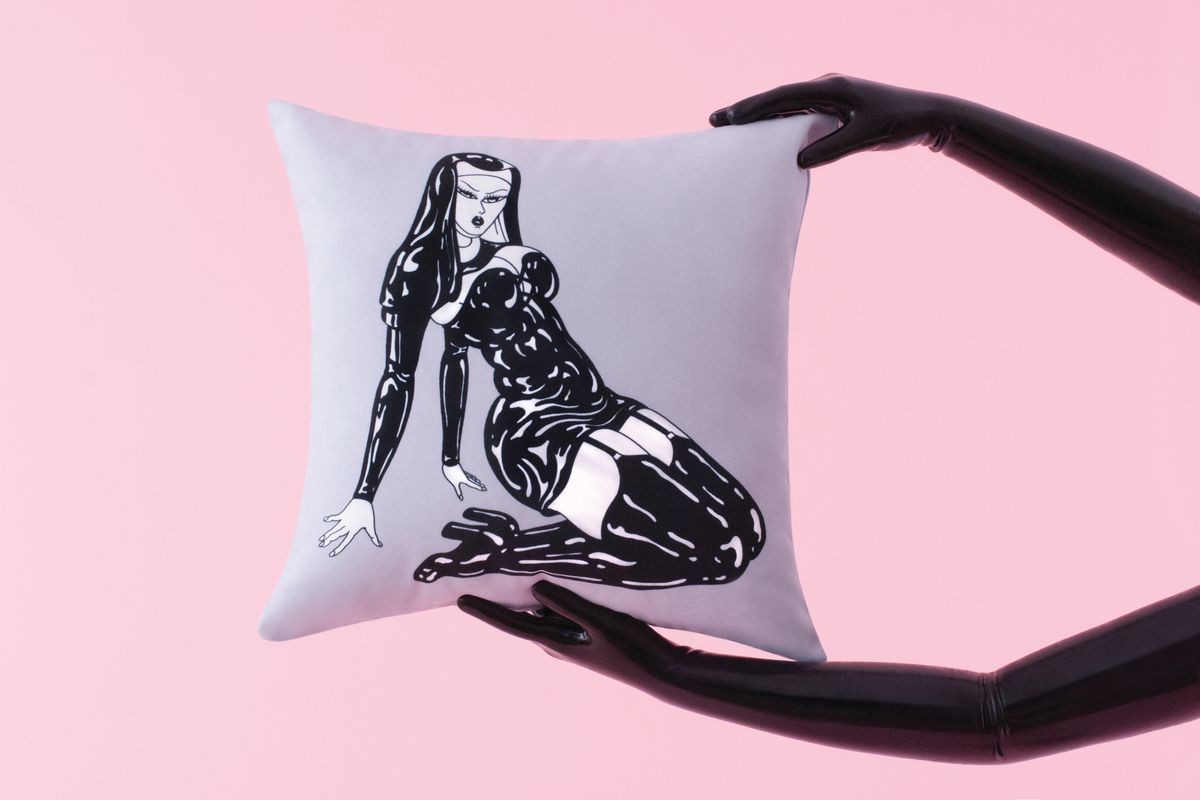 You may not know Chelsea Fairless' name but odds are you have read one of her gimlet-eyed captions on the addictively popular IG: @EveryOutfitOnSATC (Sex and The City), the account she runs with her friend and collaborator Lauren Garroni chronicling the.…well, it's pretty self explanatory. Fairless is also a bit of a fashion and pop culture zelig, having been an original employee of downtown cool collective VFILES as well as the fiancee of Orange Is the New Black star Lea DeLaria (the two split amicably last winter). Her considerable caftan collection would make even Gloria Guinness jealous and her eye for kitsch and absurdity in the sunny environs of her adopted home of LA are like having a dishy girlfriend just a click away. Now, add housewares mini-mogul to the list of slashes as she launches her line of campy and collectible objects d'maison, aptly titled "Female Trouble," this week. From Nunsploitation throw pillows ($65) to Showgirls nameplate necklaces ($80), the range is bananas and perfectly priced. We caught up with Fairless to talk about queer sensibilities in home furnishings, Jean Seberg's FBI file, and the importance of going HAM with hot pink every once in a while.

To take things quite literally, do you now, or growing up, have a relationship to Female Trouble the film and how, if at all, did it inform this project?

For legal purposes I have to state that the brand is not a direct extension of the film Female Trouble. But of course I am hugely inspired by John Waters, particularly his affinity for camp, sleaze, and tackiness. And of course I've always been in love with his outrageous sense of humor. If anything, John Waters has inspired me to take risks and not give a shit about what people think. Once I sat in front of him and Patricia Hearst at a screening of Carol and I was losing my mind.

Where did the idea to do this first begin? Was there one product or category that was sort of the cornerstone?

I always wanted to do pillows because I could never find ones that I liked that weren't super expensive. So that was always a goal, although I didn't want to exclusively do pillows. I also wanted to see a brand that existed within home goods sphere that wasn't about minimalism, that wasn't danish modern, that wasn't mid-century modern, that wouldn't be sold in the MoMa design store. I've always had very particular tastes when it comes to interiors so I wanted to create a line that reflected that.

What do you hope the pieces project to someone visiting the site?

Fun and functionality. I want to make things that serve a real function in someone's life. But I also want these products to imbue people's lives with a little bit of fun or a little bit of glamour. That's equally important to me.

What was your biggest fear about doing this? Your greatest joy in working on it?

I suppose that the fear is always failure, or perhaps being misunderstood but the public. But I'd rather run the risk of failure then be one of those frustrated creative types that doesn't actually make anything. So I suppose the fear of that now outweighs the fear of failure . The greatest joy for me has been creating stuff that I would like to see on the market. And I love the details, the hang tags, the stickers, and whatnot. I love designing the little things just as much as I love designing the products themselves.

Did you have to workout anything re. Female Trouble through John Waters Inc. ? Or any of the other merch referenced from film or cultural icons?

I trademarked the phrase "Female Trouble" in several product categories to avoid any legal issues. Like I said, the line itself is not affiliated with John Waters or the film Female Trouble. As for the other stuff, the short answer is no. I'm not making huge quantities of anything, so if I get a cease-and-desist it won't be the end of the world.

That Jean Seberg news page is insane and I can't believe I've never seen it before; how did you decide to make that a focal point?

I'm fascinated with how cruel and unintentionally hilarious tabloid journalism can be. The late '60s era-tabloid that is referenced in the "Washed Up" blanket and dress is certainly both of those things. For some reason that image has always stuck with me, even though there are a million equally ridiculous tabloid headlines from that era. But I'm also fascinated with Jean Seberg, and with her story. She was targeted by the FBI for her financial contributions to the Black Panther party. In the age of Snowden, her story is more relevant than ever.

Also how was there not already a Showgirls nameplate necklace…seems like a no-brainer!

That is an example of a product that I designed purely because I personally wanted to own it. I love that film, I always will love that film, and the fans of Showgirls are particularly passionate.

I have to ask: Are Cha Cha heels in the future for the collection?

God, I hope so. Would love to do a Female Trouble x Jeffrey Campbell cha cha heels collab to be honest.

There is obviously a queer / camp sensibility to this, can you articulate that aspect of it ? Is that something you saw lacking otherwise in the market for the categories you're offering?

Definitely. Appropriating the campiest aspects of mainstream culture has always been huge part of queer culture. And that could encompass everything from loving Faye Dunaway's career-killing performance in Mommie Dearest to decorating your apartment with Catholic kitsch. That is something that I have always really loved about the queer community and it certainly has influenced the brand. Also I'm a femme lesbian so I didn't hesitate to go HAM with the hot pink and whatnot. I would love to see more designers with a queer femme sensibility. Especially because there are so many gay men who have made their mark on the design world. And thank god for that.

You have a great aptitude for fashion verbiage, in your best Vreeland or Elsa Klensch, (or LBR Jeanne Beker) sum up the Female-Trouble collection in a dictum:

decorate your apartment with dozens and dozens of animal print throw pillows?

adorn your neck to with a solid-gold homage to Paul Verhoeven's professional rock bottom?

paint your entire apartment in shades of baby pink like Catwoman?

See this is that queer appropriation thing that I was talking about!

You're a fashion person and since it's fashion week here in New York, have you been looking at the collections? Anything you're loving or were excited to click through?

I'm excited by Calvin Klein, I love the American horror film references and one of my dearest friends did a lot of the graphics for that collection. And I just heard that Telfar is designing the new White Castle uniforms. That is more exciting to me than the vast majority of New York fashion week shows. But I'm obviously really fucking jaded at this point.

Did you ever imagine when you started Every Outfit that it would become what it has; that you would become (one of) "the persons behind it", essentially a social media celeb? Do you see that crossing over into this project?

I definitely did not anticipate the response, @everyoutfitonsatc started as an inside joke with my friend Lauren, who runs the account with me. In the beginning we just wanted an excuse to revisit Miranda's early series outfits. And now Sarah Jessica Parker and Carine Roitfeld follow us. So it's a been a truly bizarre turn of events to say the least. I definitely won't be doing SATC-inspired stuff for Female Trouble, although the bitchy, pop culture-obsessed voice that the account has will definitely cross over to this project.