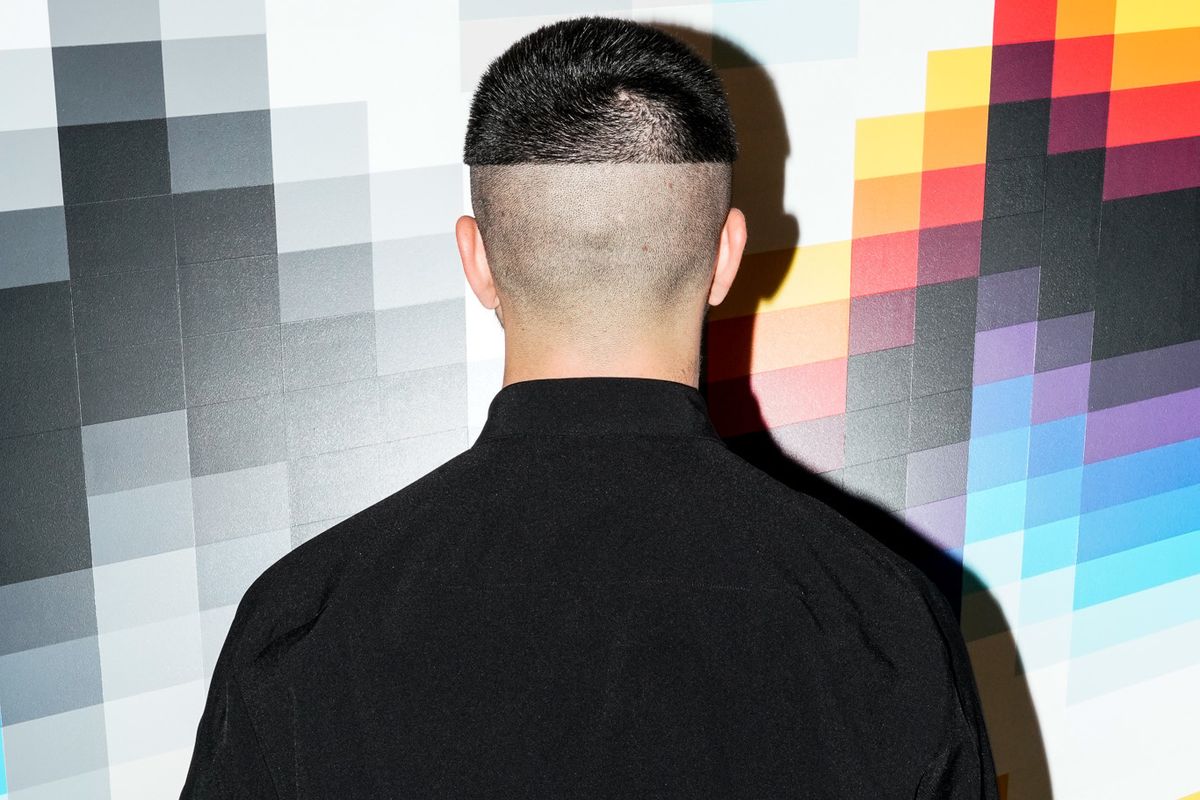 Photographer and curator Joan Fontcuberta's treatise, The Post-Photographic Condition, analyzes societal and artistic responses to a new visual era that he calls "characterized by the proliferation of images and the prominence of the internet, smartphones and social networks."

His theories struck a chord with Felipe Pantone, a technology-obsessed op-artist whose practice originated with graffiti at age 12, in Alicante, Spain. Pantone realized that the eye-catching style he had developed as a young artist was a response to a similar environment of omnipresence, speed and ephemerality in the streets. "Graffiti is about writing your name as many times as possible, as big as possible, with as much style as possible, as many places as possible," he says. "It's like, I saw that piece, I want to paint next to that, bigger. I just want to do it and win the game, for other writers to see."

If art is a game, then Pantone certainly appears to be on a path to victory. With 16 solo shows in 13 countries in the past five years, and (joining a short list of megastars like Kaws and Shepard Fairey) a just-announced collab with Hennessy, attention has officially been grabbed. Despite any humble origins, Pantone's work has evolved into a dynamic visual language which distills the digital zeitgeist into one project after another.

Some of the most dizzying examples of his retrofuturistic creations include this spectacular 2018 data waterfall in Moscow, his shiny 2016 Cyberspazio Tubolare installation in Rome, this mind-bending W3-Dimensional-BKK piece in 2018 at the Siam Center in Bangkok, and a 98-foot tall functional QR code in Belgium. He's also a popular Instagram presence, and was recently selected by Instagram as the first artist to create face filters, available in a growing number of options on his IG. This summer, he's showing in Brooklyn as part of the Beyond the Streets exhibition through August 1, with more than 100,000 square foot of work by artists that range from Basquiat to the Beastie Boys.

PAPER recently visited Pantone at his studio in Valencia, Spain, to discuss the evolution of his practice, his unique digital techniques, his design for Hennessy, his views on social media, and why, despite an intense desire to be seen, he won't show his face.

How did you develop your style and find your own voice?

It took me years. I tried doing literally every graffiti style: wild style, characters, photorealism with spray paint, calligraphy, everything. Eventually, I guess you find your style by elimination, because you don't know what you want, but you know what you don't... I believe the moment I really began making "art" was when I started analyzing what I was doing with graffiti. Before that, I was just writing my name on walls. But as I started looking deeper, I started doing more abstract work, and creating pieces that literally embodied dynamism, transformation, movement and ubiquity.

How do you translate dynamism into a technique?

There are many ways. Take abstract paintings, for instance. Although you are just drawing abstract patterns, not figures, their form or their color can still have a certain meaning. If you study colors or shapes, for example, you will know a square has a meaning, it represents perfection.

So there is nothing random about these abstract patterns?

No. I might play with aesthetics of the 1980s sci-fi film Tron to give an impression of futurism, but with a vintage touch. Or I may use the patterns of QR codes to make you think about mobile phones or computers. The first gradations I did bring to mind the early days of computers, when it suddenly became so easy to render incredible spectrums of color — something that had once been a technical feat to portray. When I paint arrows, they are designed to make you think about architecture, design. When I mix 3-D forms with optical art dynamic patterns in the background, I'm trying to convey other meanings, to lead you somewhere, and to tell a story.

So how did you then shift from graffiti to abstract art?

I had to wait until 2014 to find a way, to find a path to becoming an artist. It's only once I published my [Ultradynamic] manifesto that I began to develop some of the patterns that I still use today. I started to create a lot of optical art, having become fascinated by Carlos Cruz-Diez, a famous optical and kinetic artist, and I did a number of works as a kind of homage to him. Even though it was fashionable in the 60s, I believe [Op art] is very relevant nowadays. Optical and kinetic art transcends time. It is dynamic, modern, and abstract, though not in its subject matter. Kinetic art has a lot to do with you the viewer, with what happens when you interact with or look at the work, the experience of motion and color you have, and there is nothing abstract about that.

Can you explain your technique of "Subtractive Variability?"

Subtractive color is printing process color: CMYK. You basically subtract from light and at the very end you get the black. The "Subtractive Variability" paintings I create by moving them under the printer. For example, I print only cyan and I move the painting under the printer randomly, and then I print the magenta, then the yellow, and get literally every color. You can get anything, so it's a very fun thing to do... It's painting with a printer instead of a brush.

Why do you choose to keep your face secret?

Firstly, it was because of graffiti. I was doing illegal things and did not want to be caught. Then I just could not find a good reason to show my face, and I still can't. If I were forced to explain, I would say it's because I believe it is irrelevant. I choose every pixel of every one of my works, and they say much more about me than my face, which was given to me.

What was the inspiration for the limited edition bottle you designed for Hennessy V.S.?

I sat down and tried to find the connections between the brand and me. I care deeply about history, and what's been done before, but I also want to change things and try new things. I took some signs from the archives and we came up with a design. I think the boss was on vacation when they approved it — they're very open minded!

There's a lot of ways in which your work is interactive — the Instagram filters, your configurable systems collection, and one of the word's largest QR codes. What does that link to?

You can actually scan it on the website. It says you're the nth person to scan this. Even thought it's in Belgium, there's a map showing that people have scanned it from all over. It's a statement about ubiquity, that you can be anywhere, everywhere, that your art doesn't belong to a physical place anymore, but that everything is global.

You have a popular Instagram account and have posted about the "tubularity" of social networks, in which there is an echo chamber effect but also tremendous capacity for inspiration and collaboration. Overall do you think this is a good thing or a bad thing? How do you feel like it influences your work and perspective?

When I talk about tubularity, it's something like a dream, a tube, or a hyperloop that you can't stop. It's how social media drives you to do whatever you're doing. When I visited New York, that's how I felt. I was in the most amazing, diverse city and I would always see the same fucking people everywhere I went, in the tube! You can get out of the tube when you want to, but you have to be aware of it. It's very limiting.

You mentioned you developed your style initially as a way to stand out in a very crowded landscape. Do you think that same approach serves you well in the age of the internet?

Yes, I think graffiti is super contemporary and really responds to the times that we're living in. It was random for me, I didn't know anything, I was just a kid doing graffiti. Graffiti artists are like breakdancers or Instagram fashion bloggers: it's all about saying: "Yo, we're here."