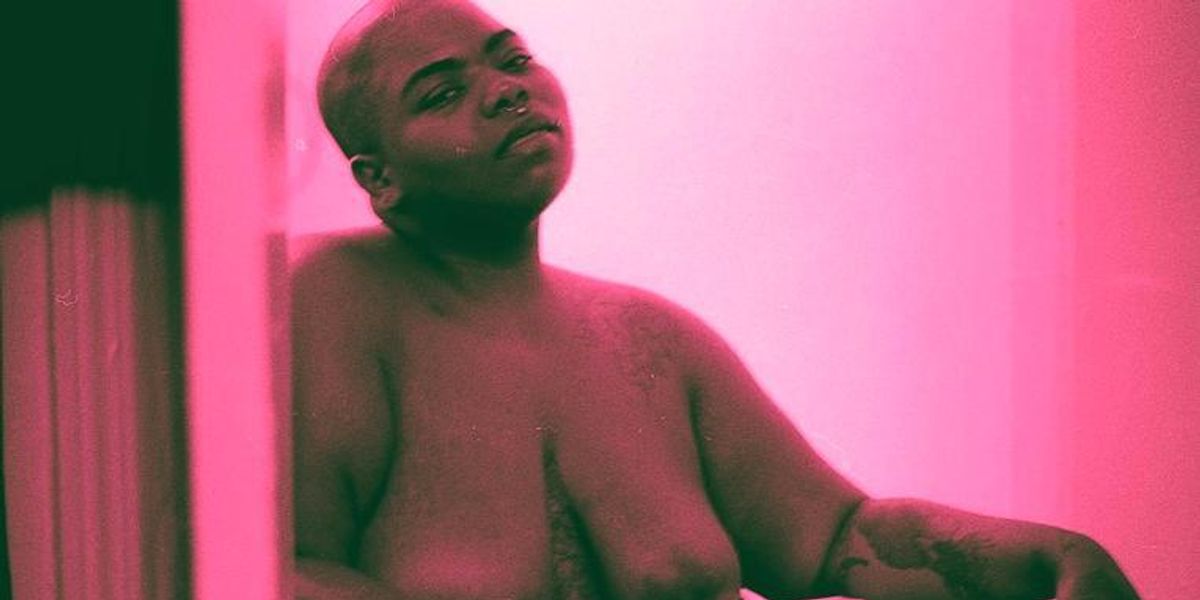 In the age of empowering selfies, the overwhelming majority of those that get retweeted onto our timelines tend to embody something closer to well-established physical ideals of beauty. Enter Fatter IRL: a fat art show being held in Brooklyn for three weeks starting this Saturday, as part of the reartshow effort. Organized by Annie Rose, a writer, artist and sex worker, it's an exhibition meant to "celebrate the work and labor of fat artists/bodies" while showcasing a more comprehensive view of what it means to be a fat, feminist artist in the age of social media and the selfie revolution. Filled with gorgeous images and installations from the likes of photographer Shoog McDaniel and model/designer La'Shaunae Steward, we spoke to Rose ahead of the opening to talk about everything from pretty privilege, fear of the word "fat" and how a new generation of body-positive artists are flipping it on its head.

So where'd you get the idea for this exhibition? How did it come to be?

I've noticed that even in the art world, which is supposedly really progressive, the people who get the most attention are [traditionally beautiful]. It's very dictated by beauty politics and people who are thin, white and cisgender. And there's also this trend now with feminist art that hails the selfie as a kind of tool of empowerment, a reclamation -- which is really cool, and I really like some of the art that's being produced around that -- but I also think that visibility is a double-edged sword for most other people who don't fit the mainstream standard of beauty. [Like, in regards to ideas of visibility and fatness, one of our artists, Rachele Cateyes, was inspired to start fat-centric, body positivity art when a photo of her in a bikini was stolen and used for diet ads. So visibility is a very complex thing.] And like...as a fat sex worker, I've seen the difference between the way I've been treated and the way that my thin counterparts are treated, and how there's much more scrutiny on my body. But, of course, I'm a white cisgender woman, so if I was a woman of color or a trans woman and I was fat, there would be even more scrutiny. So I was kind of interested in uplifting artists who don't get as much mainstream attention [but all the scrutiny]. Fat people are kind of one of the only groups of people – along with sex workers, maybe – that it's still okay to openly make fun of. So I wanted to showcase some of the art that some of these fat people are doing, and [see] the difference between that art and the more kinda mainstream, identity-based art that's being covered.

Totally. On that note, do you sort of think that, you know, the traditionally beautiful, thin, white girl taking these politically-charged selfies has a responsibility to also uplift other women who aren't classically good-looking, skinny, etc.?

I think they do. Because in my opinion, you can't be making statements about women as a whole class if you're not including other women. Like, I couldn't have this show and have it just be fat white women. I need it to be fat people of all genders [so that we can come together and] move beyond self-examination and justification. I think mostly there is a responsibility to address how their work can be more well-received because of what they look like...Like I see a lot of artists making general statements about women, and I can't really relate to that so. But I'm still a woman so, what does that mean? It's the difference between 'Oh I'm really worried about getting fat,' and then like, actually being fat. You do have to acknowledge, I guess what you would call 'pretty privilege.' Not that fat people aren't beautiful, but there's mainstream attractiveness. You just move in the world easier that way.

Tawni Staples, from "15 reasons why men date overweight women," an article from The Richest that she photoshopped herself into.

Can you tell me a little bit more about the curation process for this exhibit?

A lot of [the artists being showcased] are people I was kind of friends with on the Internet, and then a couple people that I knew in person. I really wanted it to be lots of different kinds of work. There's only one man in the show though, because, interestingly enough, only one man answered my email. [But also when I was sending these emails] it was like – 'oh am I going to send this person an email where I am like calling them fat?' I mean, we're both fat, but you know, this person might not identify with the term, or it might be something that's way too loaded for them to really own at the moment.

On the flipside, the comprehensive stigma of the word also highlights how important this show is too.

Yeah, I mean fat is very much still like a dirty word. If I say, oh I'm fat – people will still say, 'oh you're curvy,' and I'm like no, I'm fat. Just because you find me attractive, doesn't mean I'm not fat. It's uncomfortable for you that you find a fat person attractive so it's not a good word, you know? But it's just an adjective, and it's got so many negative connotations. But also fat is this interesting identity where it's something that can fluctuate, like maybe you weren't fat, and now you are, or maybe you were and now you're not. But, when you get thin, I always say that you're always going be fat, because you'll remember how people treated you when you were fat. So that was a really weird part about picking the artists. Like are these people going to be comfortable with that moniker? And it was actually kind of hard to find artists, you know? Like, there's not a lot of people who are actually making work about being fat, I find. So, [the curation was] a lot of people I knew from my community. I found that the people who were the most open about being fat were other sex workers, because when you're in the sex industry, your appearance dictates your livelihood, so people are very realistic about what they look like. So, there are other sex workers in the show and Internet personalities. The fat activist movement is really present on the internet, on social media, so there [are some pieces shown by] some people who aren't artists. For example La'Shaunae Steward is in the show and she is somebody who's famous on Tumblr and Instagram, but is an aspiring plus-sized model and fashion designer, and I was just like, 'you're so beautiful and your selfies are just so beautiful, can I just print out one of your photos as a poster and build an altar and people will worship it?' And she was like I love that, so that's going to be one of the pieces in the show, but it's kind of like a collaboration piece between me and her. [And other than that, other artists are] just friends. I mean, there's Shoog McDaniel, who just had a show in AltSpace and they are non-binary fat artists who take a lot of really beautiful photos of other fat people. And then there's a couple of other people who haven't really exhibited before, but their art and drawings and paintings are famous on Tumblr, or they have good Etsy shops. Like, this is the kind of art that I want to see – so let's take it off these, kind of viral, platforms and put them out there. One artist goes by the name PervyPanda, and on Tumblr I think she's called AFatBlackFairy, and she was just doing these drawings.. She's an aspiring comic-book artist, and I had her, you know, make one of the drawings on this large-scale canvas that we're going to put in the show. Social media played a big part.

Does that play into the name of the show as well?

Oh yeah, that is definitely part of it, 100%. And also, I'm kind of obsessed with the idea of catfishing and how people represent themselves on the Internet. And I noticed just like in life, or from seeing things happen on the show Catfish, a lot of the people who catfish are fat people, and are just afraid that nobody will love them, you know? There's always kind of that fear that marginalized identity has -- that nobody's gonna love you.