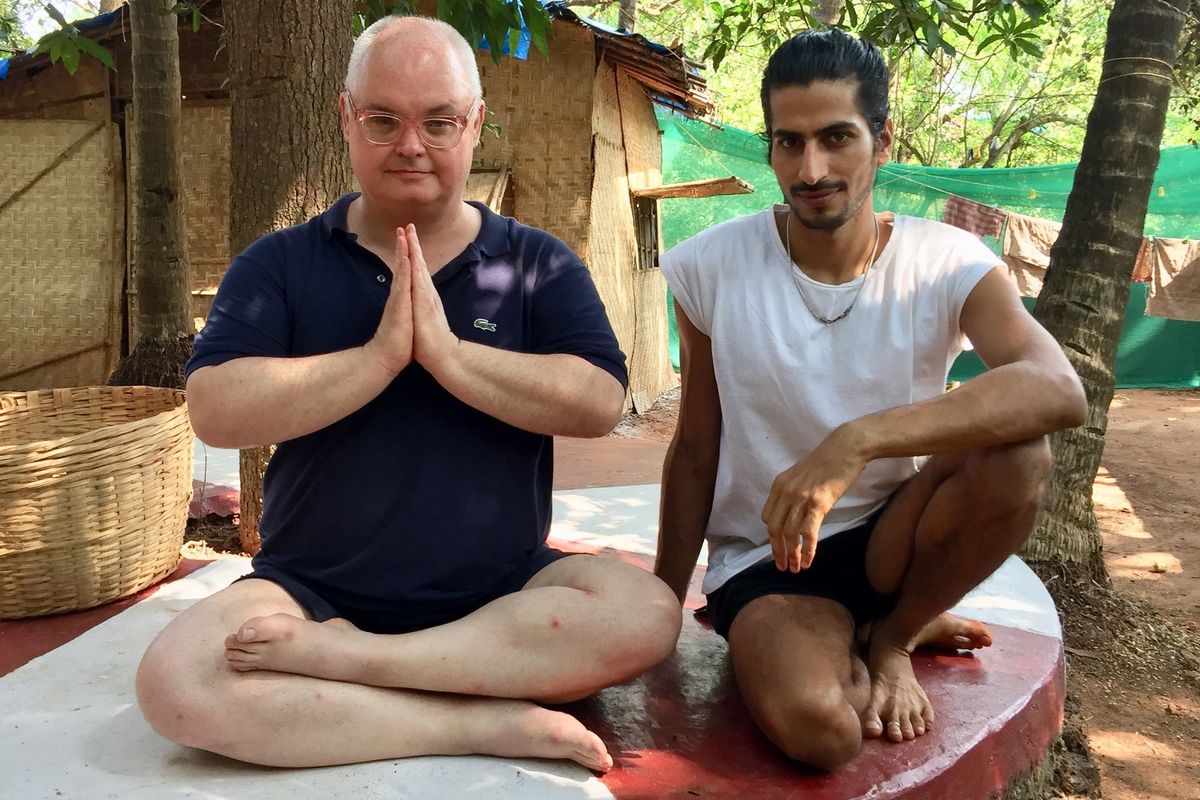 Fat And All That: A Journey Through Yoga

Looking at my Instagram feed, people might assume that I'm a long-time yoga queen. They see me hanging upside down or doing backbends in the jungles of India and think I'm some kind of vagabond hippie who's been practicing yoga for decades. The truth is, I've done two week-long yoga intensives in India and then 3 individual classes in NYC. That's all. I'm a frequent traveler to India and love everything about the country, but somehow, I never felt the pull towards yoga.

Then my best friend in India, Mihir, a successful model and big city boy from Mumbai, did a yoga teacher's training in the Himalayas and started teaching yoga in Goa. He traded the insanely fast pace of Mumbai for sitting in the lotus position under a palm tree nibbling vegan treats. I was going to visit him for Christmas anyway so thought, what the hell. I'll do some yoga.

Mickey in Goa with his yoga guru Mihir Jogh

I arrived at the Iyengar Yoga Center nervous and slightly excited. I'm freakishly limber in some areas and a total disaster in others. I tried to blend in wearing a black swimsuit, black Lacoste shirt and black adidas sneakers but since all the other students were wearing official yoga clothes like tights and tank-tops, I really didn't fit in. Being a label-whore/fashion victim, I had decided to break in my cruelty-free nylon Chanel bag as my official yoga bag. I was certainly the only one in the Yoga Shala with a designer handbag. I was also the only one a BMI in the obese category.

For fat folks who are embarking on a healthy living transformation, any kind of exercise can be scary. But even though, for me what I eat is the most important thing, I need to exercise to feel my best. I love the feeling of stretching out and getting the blood circulating. I swear exercise gives you an emotional face lift that I'm convinced shows on your actual face. I'm lucky that my good friend was the yoga teacher because I knew I could trust him and for a non-athlete like me, it's all about trust.

Having had almost zero experience, I really didn't know what to expect and frankly I love having no idea what I'm doing. It's oddly liberating. You have no pre-conceived ideas about what's right and wrong and I had no fear of looking silly because I expected to look like silly. Part of getting the most out of trying new things is being willing to look like awkward.

Mihir has the charisma of a movie star. Before teaching yoga, he was a flying instructor and fitness teacher. "I'm happy to be serving people through this practice," he says, "and the most rewarding thing is to see everyone transform even in a short five day course.

Mickey getting stretched by Mihir and his assistant

"In many Western adaptations of yoga, the teachers are creating a competitive environment. This causes tensions in the atmosphere and within the body. This is exactly the opposite of what yoga is meant to do."

I asked Mihir how Iyengar yoga is different than other types of yoga. He told me, "The method we follow is a physical practice but it has a much deeper meaning. It retains the essence of yoga which is actually to help deal with the fluctuations of the mind. We follow a non-egoistic and non-violent approach. We are able to respect our bodies by adopting a more friendly approach towards it." He continued, "In many Western adaptations of yoga, the teachers are creating a competitive environment. This causes tensions in the atmosphere and within the body. This is exactly the opposite of what yoga is meant to do."

Often on Instagram, you'll see people holding the craziest poses that look unnatural and painful. Mihir says in Iyengar, "We encourage the practice of yoga with the least amount of strain or effort." We used tons of props: stools, bricks, pillows (or bolsters), all to prop ourselves up in the most comfortable way. Some super-fit and flexible students didn't need them, but I was the king of props. Being 52, obese and out of shape with a bad lower back and arthritis in my toes, I was happy to have props and also thrilled that Iyengar stressed being comfortable and not showoff-y and competitive. There were two older women in my class who needed a lot too, as did an older man with a neuromuscular disorder. So we were kind of the Golden Girls of the group.

In Iyengar, it's all about activating the toes and balancing on the heels or the mounds of the feet. It actually felt great to stretch out my toes and feel my body align on my heels. I was not great at the standing poses which didn't feel great on my back, but I did my best. As Mihir told us, "There's no beginners here and no advanced students. We all start at the foundation. So drop your egos and raise your toes."

I call this pose the showgirl

One of the more dramatic poses we did was a shoulder stand. For some reason this pose — our heads on a blanket, legs extended up in the air and resting on a bamboo railing — always made people emotional. Usually at least one or two people burst into tears, not from pain but from released emotion. The funny thing is when I went back the following year for my second week-long intensive, I was a whiz at the shoulder stand and it felt so relaxing. The first time around I could barely do it.

Mickey in a shoulder stand

One amazing thing about the whole experience is that being in these poses really got me in touch with my body in a way I don't think I had ever been. Since I found out I have arthritis in my big toes, I've been afraid to even wiggle them, but here I stretched them in all kinds of ways and it felt great. I think so often fear convinces us that we can't do something and if we just try we'll really surprise ourselves.

During one class Mihir told us, "You don't own your breath. It comes and it goes as it pleases." What a profound thought. That was the day we did backbends and I must confess that I'm a tiny bit obsessed with them. The same way I had imagined myself as a kid standing on my head, I imagined myself as an adult popping into backbends left and right. Of course, I also imagined that the backbend was the most difficult pose, achieved by only the most advanced students who were far more limber than paunchy old me. I doubted with my girth and weak lower back that I would even be able to raise up into a single backbend. But you just never know when magic will strike.

Along with a few other students who needed some props, I was lined up against the stage. That way we had a little less distance to reach back. Michelle, a fabulous South African teacher who was helping Mihir with the class, demonstrated the pose and Mihir pointed out that it was all about using the butt to lift yourself up into a bow. Mihir claimed this pose is actually incredible for people with back issues, despite the fact that people imagine it's a real back buster.

So, I flopped as gracefully as I could down on the bolsters reached back to grip the stage, stood up on my feet cushions and squeezed my large, not-very-well-toned ass and hoped for the best. Much to my amazement I made it all the way up without much fuss. Yes, I had some props but, wonder of wonder, miracle of miracles I was fully up in a beautifully arched backbend. We were supposed to each do 30, yes 30, of these poses but I was proud as a peahen to have done 16. And frankly, doing the backbends made me actually feel giddy. I'm sure it was partly the thrill of success, but I also think backbends release some kind of endorphin because the whole class suddenly was chatty and worked up.

The yoga center also has a person named Regi who does breath work. I wasn't really sure what that meant but I was game. I had a breath work session the day before the classes started and that was amazing. Twice I started crying. It was so emotional for some reason. Basically, I have unresolved daddy issues and Regi said I need to be more aggressive on the inhale.

At my second yoga intensive in Goa, the yoga class took place up a hill in the jungle under a canopy of trees that were usually filled with frolicking monkeys. It was like being on a deserted island. For this intensive, we did inversions every day and I must say, after the backbend, the inversions are my favorite. People see photos of me hanging upside down by a strap and think I must be so advanced, but really there's nothing to it except trusting your instructor. You just lean back on your upside down. Fold your legs in and you're done. The less you think about it, the better. When I was a child I was obsessed with the idea of standing on my head, which I never did. I fantasized about carrying around a little pillow so I could stand on my head anytime I felt stressed. Who knows? Maybe I did yoga in a past life. Whatever the case, nothing is more relaxing and invigorating than inversions. I come out of feeling like any stress has evaporated from my body and every part of me is stretched out and relaxed.

The thing about these yoga intensives if they really give you more bang for your buck than just doing a class or two a week. I love immersion! You really feel like a serious student and I love that. And even though I've only done two weeks of serious yoga it really ignited the fitness spark in me which led me to going to a trainer. My fitness journey is really just beginning and I can't wait to see where it takes me.