Seated together in a row, the Smith family is quite something to stare at. The six members are, without a doubt, just stunning. That includes mom, Sheridan, and dad, Dallon, who proudly sit beside their four children after a long photoshoot on a hot Los Angeles afternoon. Though they're here to talk about the band all four kids play in, The Atomics, it's also an occasion to talk about the heaps of attention the Smiths have received of late, including numerous comparisons to another very famous, very good-looking family band: The Osmonds.

All four siblings — sisters Starlie Cheyenne, 21, Daisy Clementine, 20, and Pyper America, 19, and their younger brother, Lucky Blue, 18 — are models with careers steadily on the rise. And those are their real names, if you were wondering.

Lucky, in particular, has become one of the biggest male models of the past year, thanks to a shock of platinum hair, which he's apparently growing out, and his outrageously chiseled features, including blue eyes so intense they feel like they have their own orbit with which to suck you in. He's been modeling since he was just 12 after being discovered when older sister Daisy went to a model scouting event back in Utah. As Daisy notes, she had wanted to be a model "forever," since her mom and grandma were both models. She was the first to get a contract, and then, a year later, when the whole family accompanied Daisy on a meeting at her agency's LA office, her reps decided they needed the whole family. "They were like, 'sign everyone!'" Daisy recalls with a laugh. 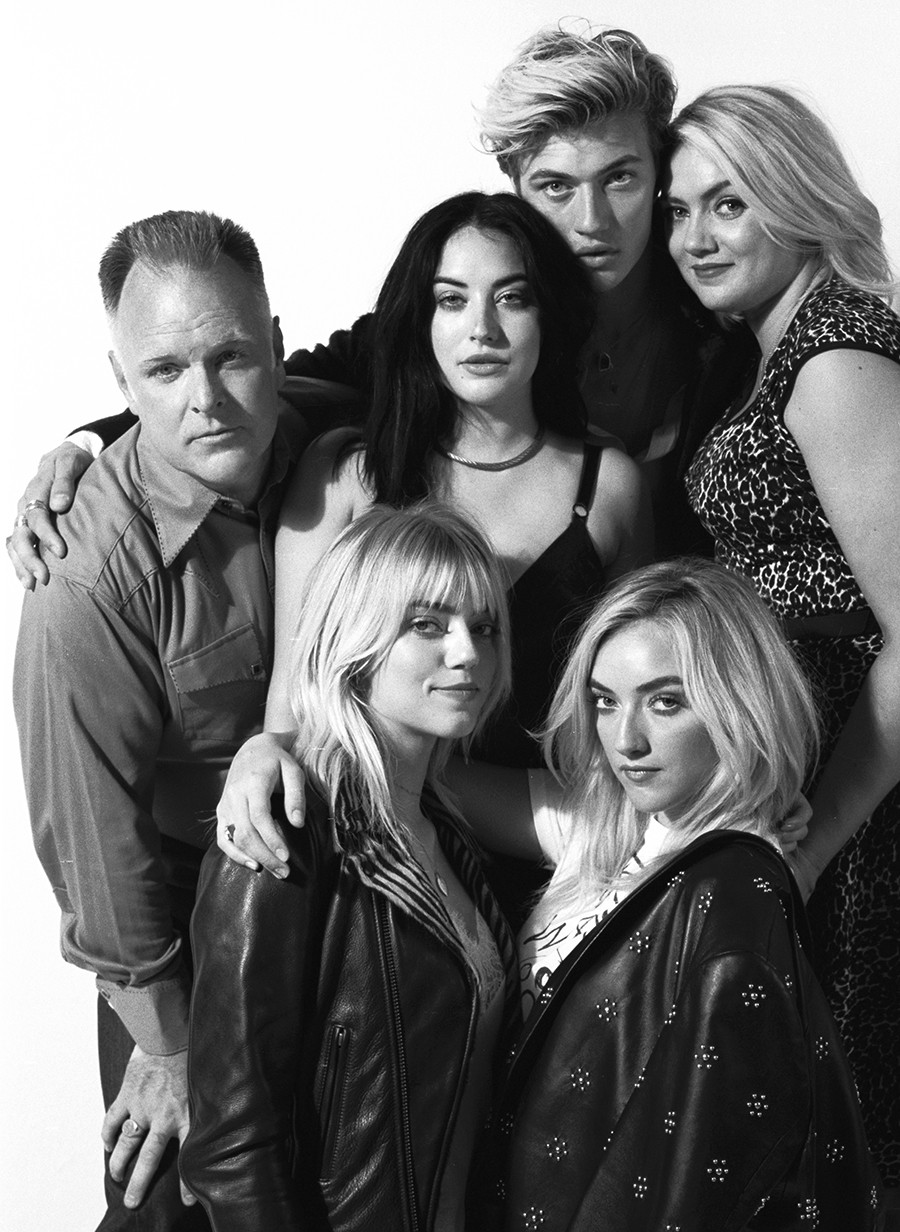 Dallon wears jeans by Levi's and a vintage shirt by Rockmount. Lucky Blue wears a coat by John Varvatos, shirt by Akaii Boutique and pants by Vivienne Westwood. Starlie wears a bra by What Katie Did, skirt by HOUSE OF FCB, shoes by Giuseppe Zanotti and necklace by Jenny Dayco. Daisy wears a t-shirt by Vivienne Westwood. Pyper America wears a jacket by The Cast and a dress by 4 Love. 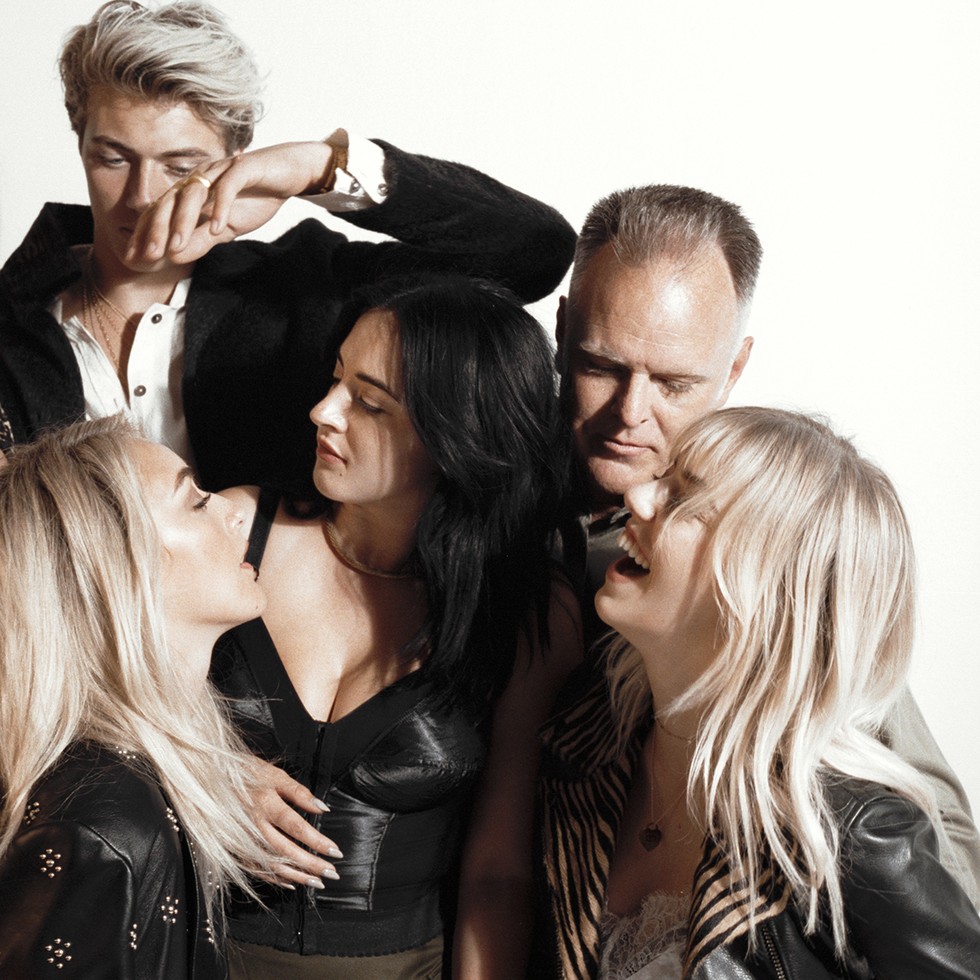 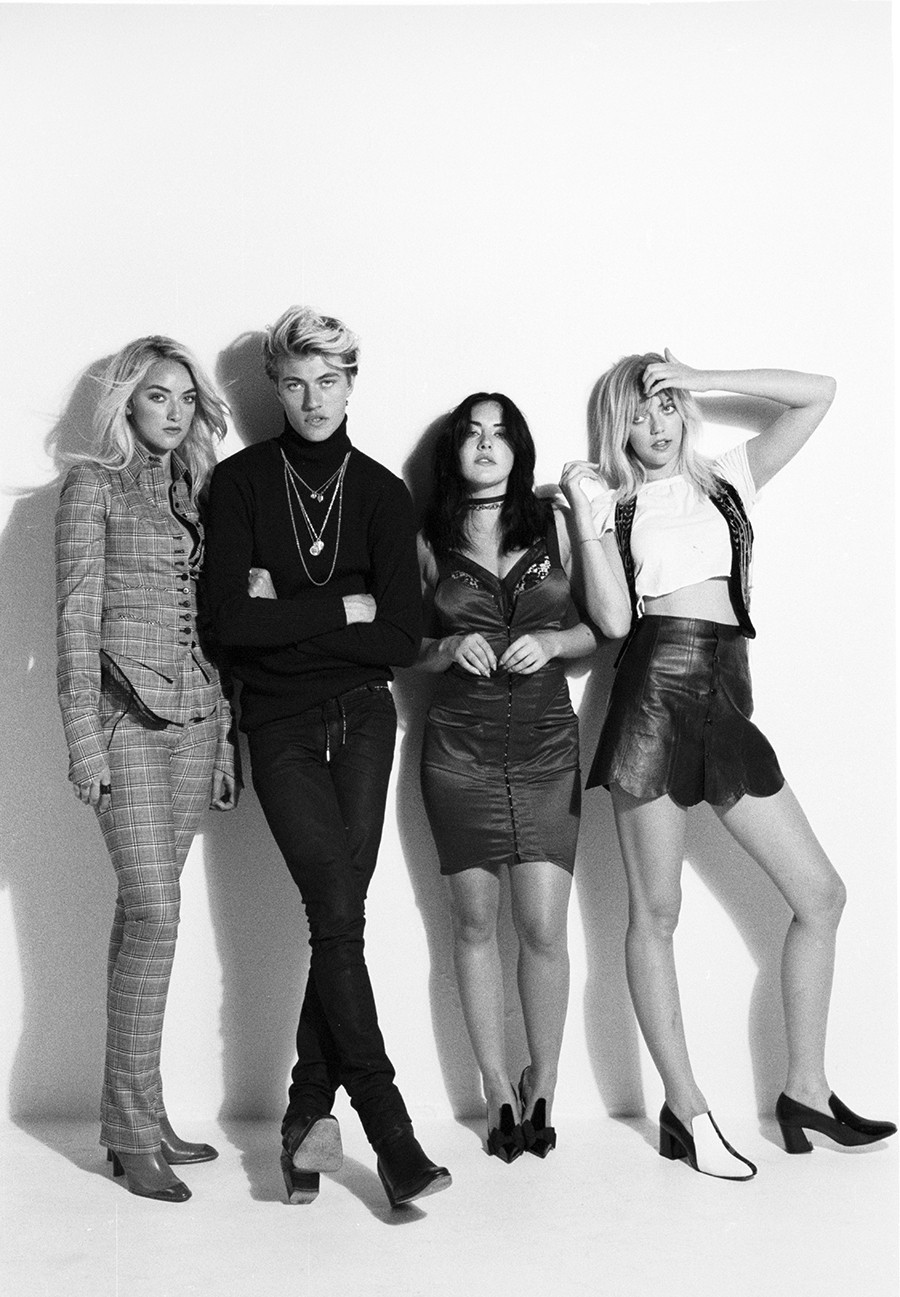 Daisy Clementine wears pants, shirt and vest by Norisol Ferrari and shoes by Tod's. Lucky Blue wears a turtleneck by H&M, jeans by Acne and vintage boots by YSL. Starlie wears a dress by Murmur, bra by WHAT KATIE DID and vintage shoes by YSL. Pyper America wears a t-shirt by The Squad, vest by H&M Studio, skirt by Rachael Cassar and shoes by John Fluevog. 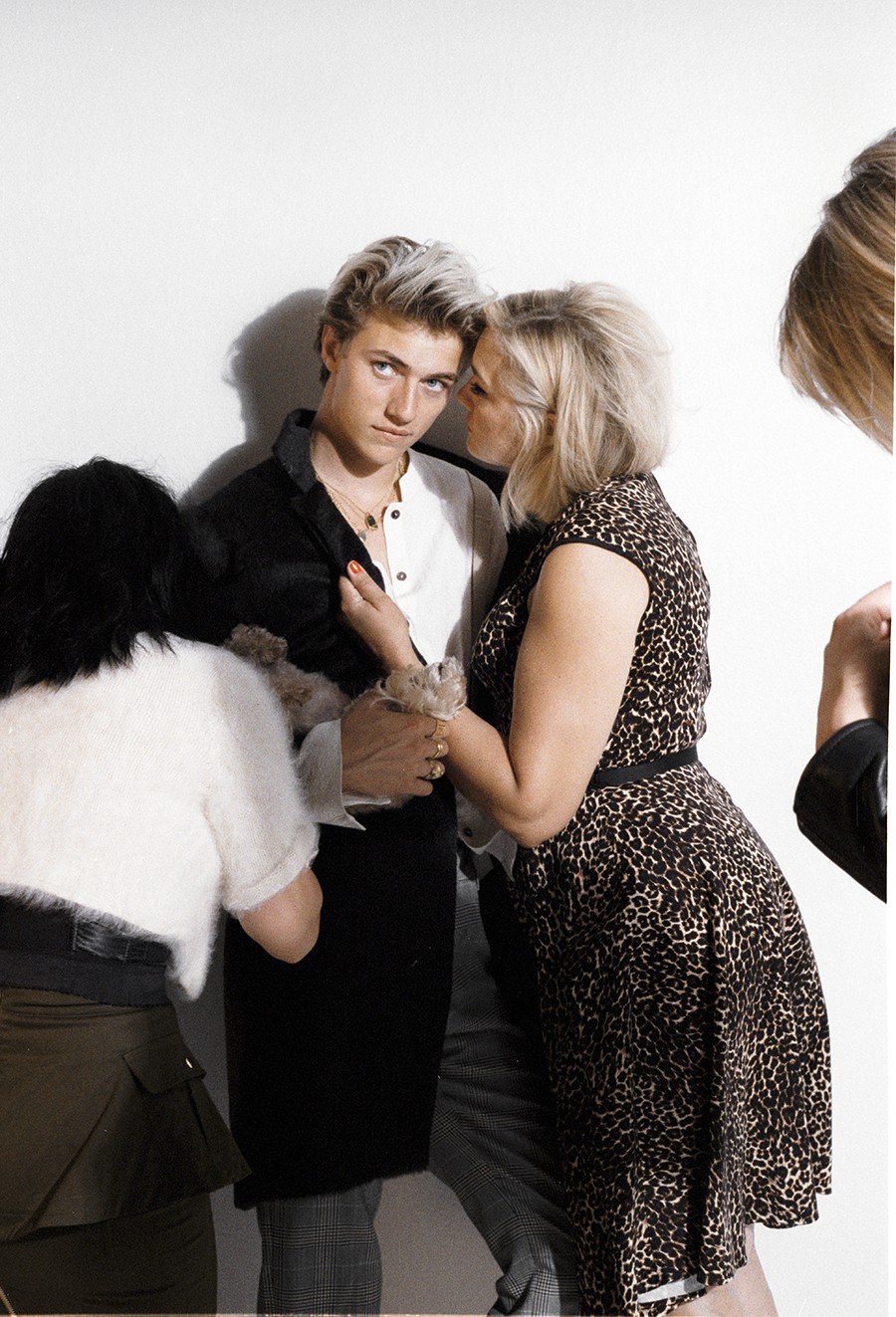 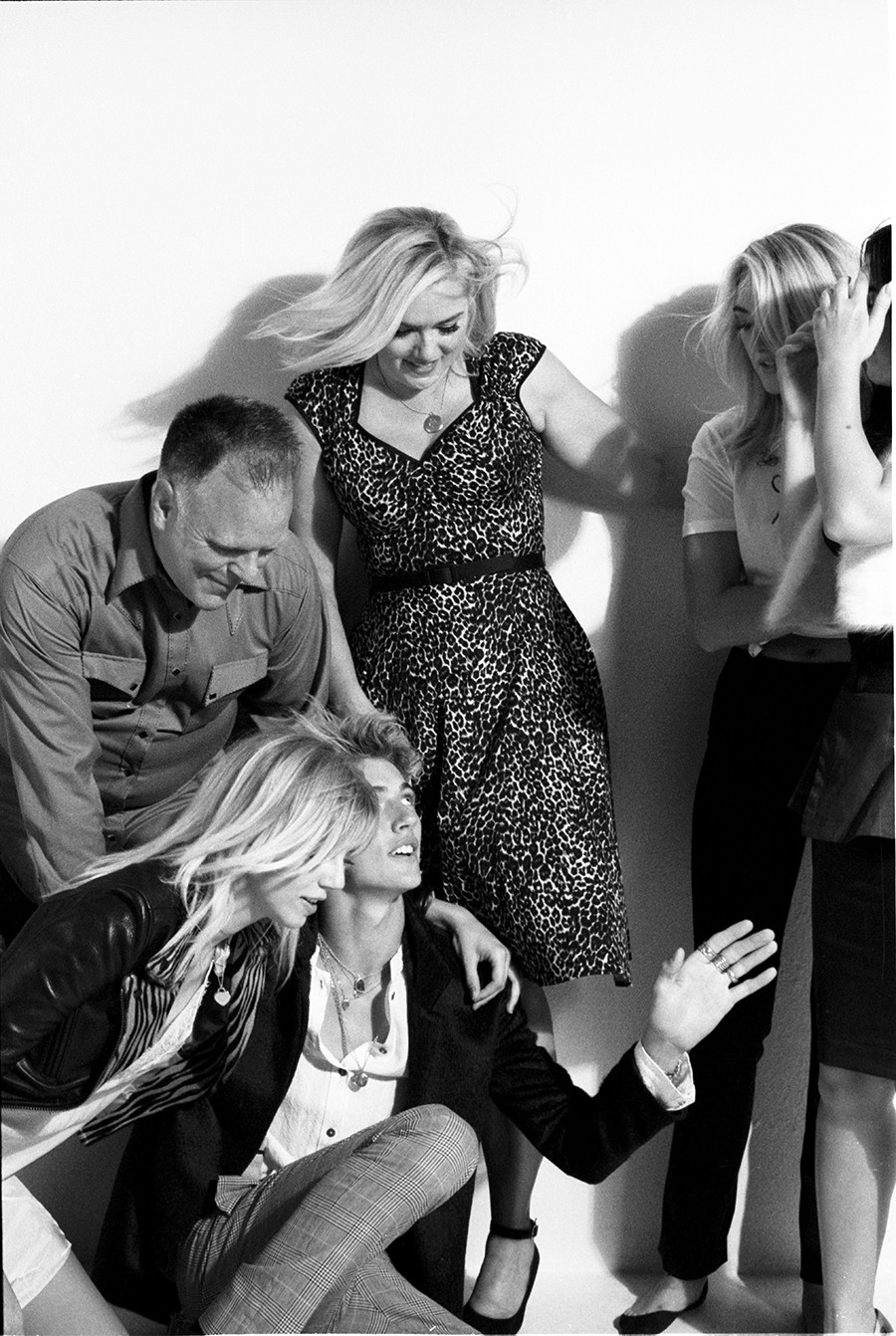 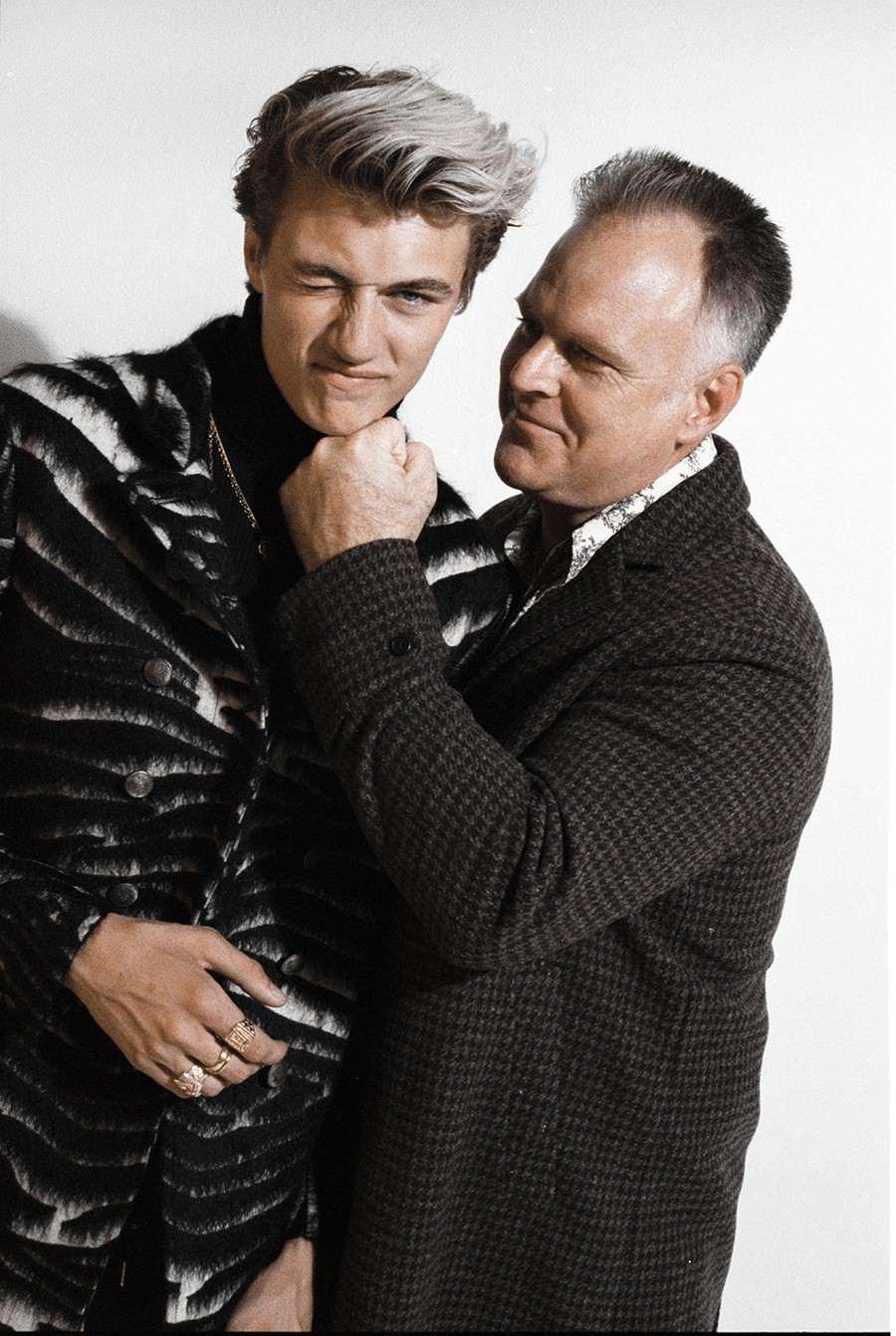 Lucky wears a turtleneck by H&M, coat by John Varvatos and Dallon wears a coat by H&M and a vintage shirt. 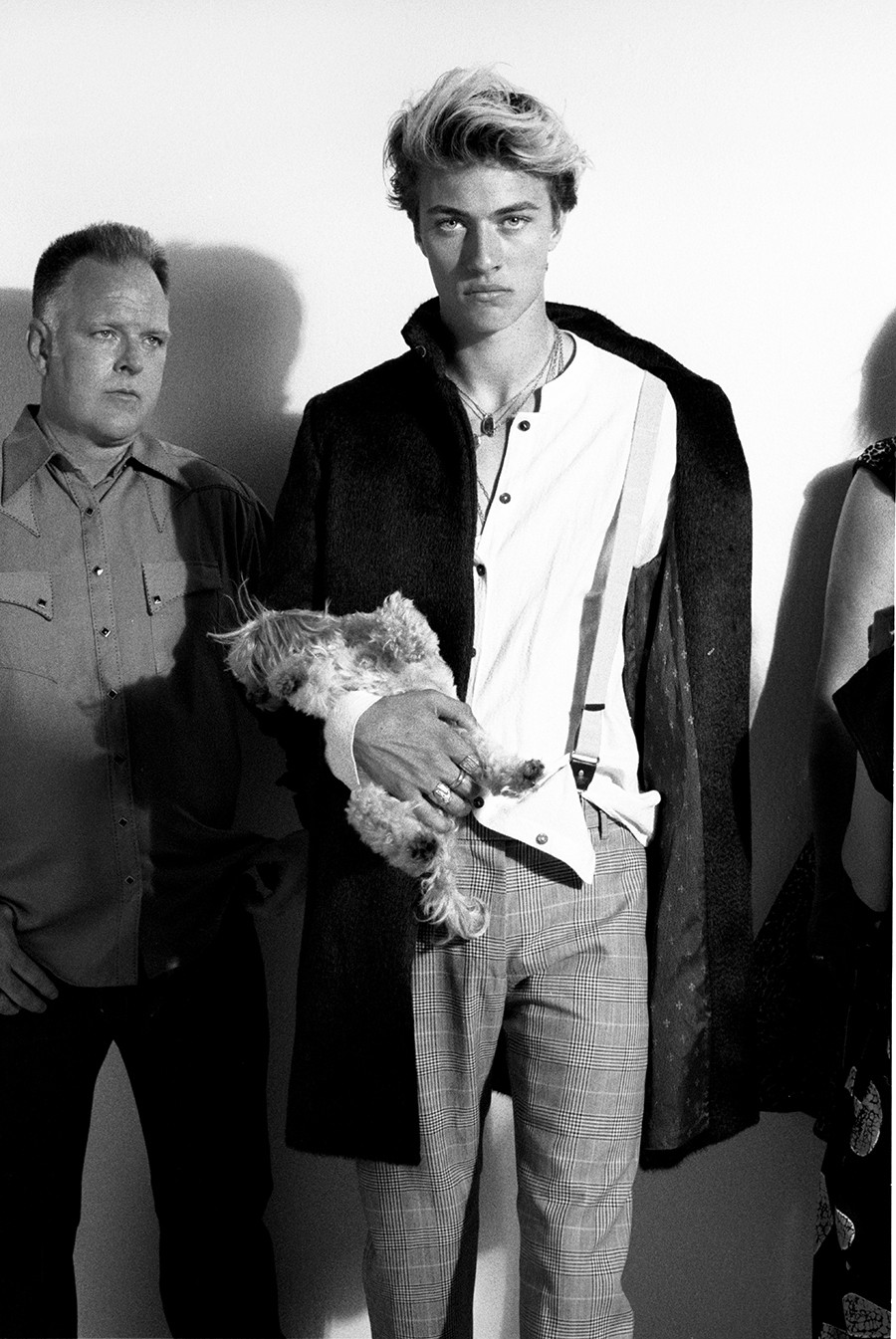 In the years since being signed, Lucky has walked for designers like Tom Ford and Fendi while appearing in campaigns for the Gap, Levi's and Tommy Hilfiger and on magazine covers across the globe. He and his sister Pyper attended their inaugural Met Gala this spring, wearing custom, eye-popping H&M outfits. And as his star has risen, Lucky has become a certifiable teen heartthrob, with upwards of 2.6 million followers on Instagram. Throngs of teenage girls, sometimes numbering in the thousands, wait for him outside fashion shows so that they can hug him and snap selfies together, something he almost always obliges. He also has a book arriving in November, titled Stay Golden, that's "pretty much about my life and how my career is taking off." The book will have personal photographs as well as various life lessons and useful advice he's gleaned so far in his career. And between all of it, he managed to shoot his first starring role in a feature film, an indie romance titled Love Everlasting that's set for release later this year.

In person, Lucky's by far the quietest member of the family, though he's receiving the lion's share of attention. That doesn't mean his sisters' accomplishments are anything to sneeze at. Both standing a towering 5'10", Daisy and Pyper have racked up appearances in Italian Vogue, Nylon, W, Marie Claire and i-D. Pyper also appeared in a Moncler campaign shot by the one and only Annie Leibovitz. Starlie, meanwhile, has been deemed too small for the runway at just 5'5", but she has appeared in Vanity Fair and ads for the Gap, and she heads up the family band as lead singer and songwriter.

Beyond their enviable cheekbones, the Smiths have received those Osmond comparisons because they, too, are proudly Mormon, having moved to LA just three years ago from the small town of Spanish Fork, Utah. Dallon and Sheridan, a former musician and model, respectively, now manage their children's blossoming careers full-time and still have all four kids under one roof, in a house in Glendale. But before they moved to the suburbs, the entire family squeezed into a two-bedroom apartment in the heart of Hollywood, just blocks from the Walk of Fame and Grauman's Chinese Theater.

Pyper, the chattiest of the gang, says, "That was kind of hard. Really hard. Especially because we came from a three-story house with a music room and a backyard where you could just run around. It was just different."

"But it was kind of fun and charming and like a movie," Sheridan counters. "Like, you're moving to Hollywood!"

The family's new Glendale digs have a music room that's getting a lot of use these days as the family focuses on The Atomics. It's by no means a recent endeavor, either. All four kids have been playing music together since they were in grade school. Sheridan even notes, "I actually asked Lucky the other day, and he doesn't even remember not playing drums."

After giving his kids instruments one Christmas, Dallon taught them the basics of how to play, helping them learn covers of songs they liked. "We started off with surf music," he says. "The goal was to get a little surf song set, and I think everyone wanted to carry that guitar influence over."

The Atomics have continued to zero in on a very likeable brand of surf pop reminiscent of Best Coast. Take, for example, their 2015 single, "Too Late," which has Starlie crooning her buttery vocals over a dancing baseline and upbeat handclaps, sounding like indie queen Neko Case on a surfboard.

And as soon as the topic of the band's future comes up, it's clear this is Starlie's terrain. She's the eldest sibling and the only brunette in the clan, performing alongside Lucky on drums, Pyper on bass and Daisy on guitar. Starlie goes out of her way to acknowledge the stark physical difference between her tiny frame and her statuesque, blonde siblings. "Well you know, I'm just a curvy little thing," she says with a huge laugh. "I just love singing and I really love performing, so I'm excited to get out there."

And for skeptics who might assume the band is a clever way for the Smiths to continue to squeeze money out of their very fortunate DNA, Daisy notes that "the music was always there first. We've been playing music through the whole modeling thing, and then all of a sudden we started getting modeling opportunities."

Somehow, they've managed to wrangle their whirling dervish careers and get in the studio to record a batch of new songs, intended for a full-length album to be released at some point soon. "Something exciting is going to come," says Starlie with a coy smile. It's good that new music is on the horizon since, so far, there are just a handful of singles to be found by the band, including a music video for the song "Agent A.D.D." shot when they were truly just knee-high kiddos, in 2011. Lucky even has a mouthful of braces as he swings away at the drums.

This month they'll play a show at the Roxy, LA's famed venue on the Sunset Strip. It's a big show for the band, who, up to this point, has mostly performed at parties in New York and LA or small shows in Utah near their hometown. Sheridan, looking proudly at her kids, says, "It's kind of like a little bit of a coming out. It's like, they've always been the band forever, but —" Daisy jumps in, "Now we can show off who we really are."

Lucky Blue wears a turtleneck by H&M, jeans by Acne and vintage boots by YSL.

Starlie wears a dress by Murmur, bra by WHAT KATIE DID and vintage shoes by YSL.

Pyper America wears a t-shirt by The Squad, vest by H&M Studio, skirt by Rachael Cassar and shoes by John Fluevog.