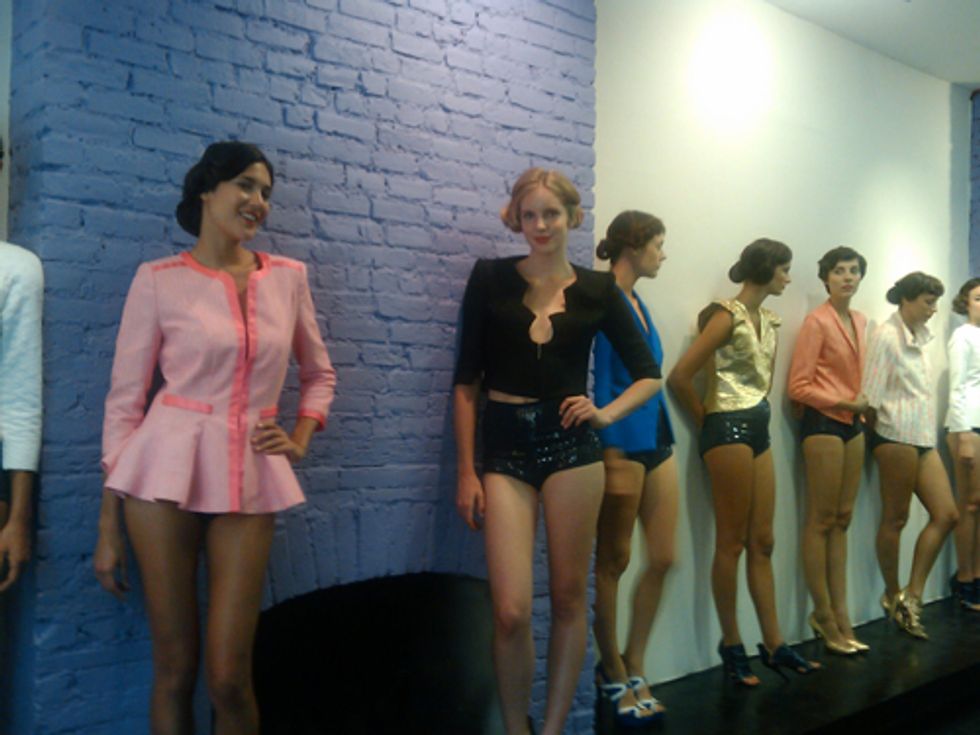 The tents are up, the stilettos are on and the madness has started. Today, I've already hit BCBG, Whitney Port's new clothing line Whitney Eve and checked out Kelly Bensimon's brand new jewelry line. Check in first thing in the a.m for those deets, but for now, lets talk pre-Fashion Week: yesterday. The shows had yet to officially start, but a few designers jumped the gun -- and rightly so -- to put together a handful of haute presentations. The highlights?

1. "It" Brits Misha Nonoo and Deborah Lyons, the duo behind Nonoo Lyons, dressed models in sequined hot pants, sparkly stilettos and an array of splendid jackets from their Spring 2010 collection at their pop-up store on 51 Wooster Street. (Pictured above.)

2. The father and son behind behind one of Brazil's hautest labels, Valdemar and Adriano Iodice, flew in from Sao Paolo to mingle with reporters and buyers at the Morgan's Hotel, where they showed off sultry dresses from Iodice's SS 10 collection.

3. Menswear designer, Robert Geller and Levi's joined forces to create a collection. Find the pieces at Bloomingdale on Fifth Avenue.

4. The Bowery's own Haleh debuted her spring collection to a packed crowd at the Morrison Hotel. Glow in the dark ruffly blazers and over the knee boots stole the show.

5. Viviene Tam met with a handful of bloggers and reporters at the Westin to announce the the creation of yet another special edition laptop with Hewlett Packard. Her Spring 2010 laptop will be unveiled during her runway show on Saturday.