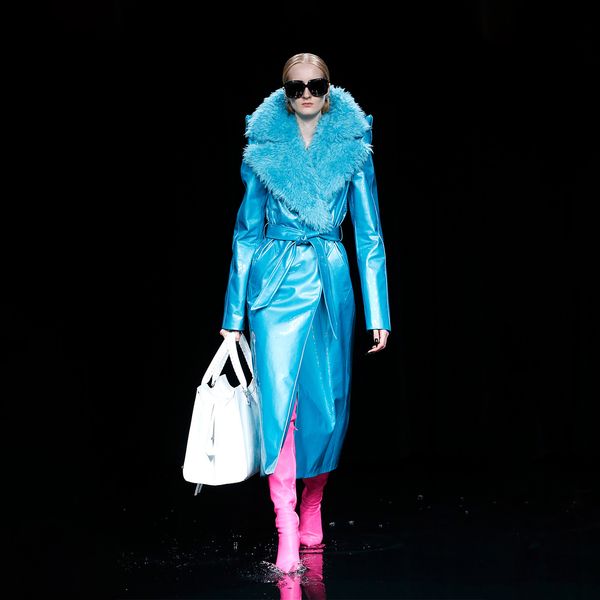 Fashion Month Was Another Failed Attempt at 'Sustainability'

Fashion month is inherently unsustainable. Factoring in transportation and set waste makes that a no-brainer before we even mention the industry's bigger sustainability issues at large. Like the fact that the fashion industry at its current growth is predicted to be responsible for a quarter of the earth's climate budget by 2050.

A recent report explored the emissions from global Fashion Week events, measuring the travel required to attend the four major fashion weeks during four women's and two men's wear seasons, as well as attendance at a number of major trade shows in such cities as Copenhagen, Tokyo and Seoul. It found that the travel undertaken by buyers and brands produced about 241,000 tons of CO2 emissions a year — that's equivalent to the annual emissions of a small country.

With that in mind, it's no wonder that another recent survey found that 61% of New York Fashion Week participants reported feeling some guilt about the event. And yet the resource-intensive runway show continues its struggle towards achieving "sustainability," mostly on a superficial level. Burberry's London Fashion Week show was completely carbon neutral, Stella McCartney asked showgoers to take Lime scooters to her Paris Fashion Week show that showcased her most sustainable collection ye, and Collina Strada founder Hillary Taymour provided her audience with pamphlets on eco-friendly food choices in New York. (Seemingly aware of how futile the cause was, she declined to use the s-word when referencing her collection, which used deadstock fabric.)

It's not all bad. Beyond sustainability as a greenwashed buzzword, or an opportunity to make a statement, this season did mark a number of positive shifts in the right direction. Copenhagen Fashion Week introduced a sustainability requirement for any brands wishing to show on its schedule and promised to reduce their own greenhouse gas emissions by 50% over the next three years. This is following Stockholm's self-cancellation out of concerns for the environment last year. It's clear the industry is slowly catching on that the traditional runway show won't cut it in the face of our climate and ecological crisis.

This is something that climate activist network Extinction Rebellion has been trying to push for years, hosting regular fashion week protests in London and New York. It's also a key message coming from alternative fashion week's that are running alongside some of the most anticipated shows, like ReFashion Week in New York. Patrick Duffy founder of Global Fashion Exchange, which hosts global clothing swaps, helped to open The Empty Shop in New York this season to encourage the recirculation of thrifted clothes.

As the larger fashion week events play catch up with smaller sustainable fashion initiatives, alternative fashion conferences and events like Slow Factory Foundation's star-studded Study Hall summit and international sustainability forum Rio Ethical Fashion are creating a dialogue that's often greenwashed by runway shows. This includes the intersection of climate justice and social justice, and how the climate crisis disproportionately impacts black and brown communities, many of which the fashion industry also relies on for production.

"We avoid having fashion or trade shows due to a more critical and independent approach towards overconsumption and carbon emissions as well," says Yamê Reis, the founder of Rio Ethical Fashion. "There is a growing interest in sustainability in global fashion weeks, specifically in the last two years, but for me the next step would be setting boundaries of set design materials, logistics, waste generation, energy, water spending and making carbon compensation mandatory."

With the coronavirus outbreak calling off many shows, and some smaller fashion weeks taking place in the coming weeks, some may consider "fashion month" over — but the conversations around more meaningful commitments towards a more sustainable fashion industry are only just beginning. At Moda Lisboa Fashion Week in Portugal (Europe's "green capital") this past weekend, events acknowledged their cultural, social and educational responsibility, and the entirety of the free admission activities were dedicated to discussing ways to "reinvent the fashion system." Smaller, more locally-driven fashion events like these might just be the future — especially if they're livestreamed for those who live several carbon-heavy flights away.

Although there's a valid argument that fashion's "sustainable" efforts are currently not in line with the severity of the climate crisis, Céline Semaan, executive director of Slow Factory Foundation, urges us not to shy away from such efforts altogether. "Sustainability is not a bad word. Every brand out there has to begin investing in impact and pushing for climate positive action," she explains. "The idea of us humans working with the planet and its creature should not drive us to fear or condone the words that describe that motion."

With less than 11 years to prevent irreversible damage from climate change, we can only hope that environmental initiatives progress more swiftly next season. As Semaan puts it: "If we can turn fashion week into an event where actionable solutions are showcased and push for progress on climate positive action, we can influence people from all areas of the industry to enact lasting change. For now it is still a show with little action even when brands take a stand and show their value, we still have a long way to go." The impact of not doing so could make Balenciaga's underwater show less of a statement and more of a prediction.