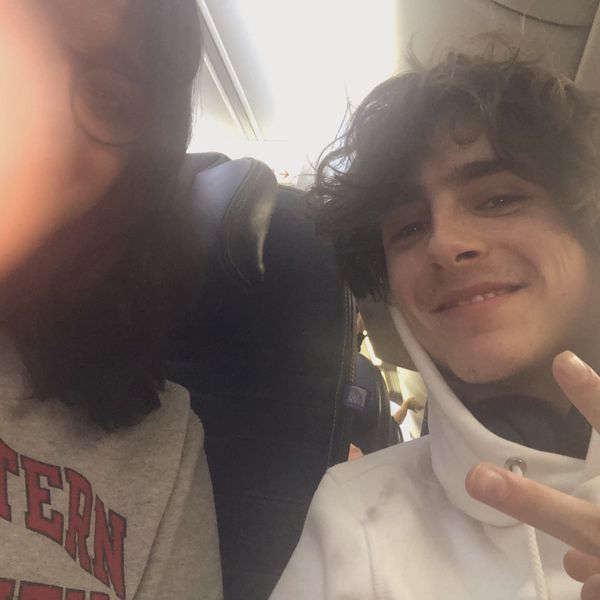 Woman Lives the American Dream, Sits Next to Timothée Chalamet on a Plane

For most of us, the stars will align at some point before our deaths, and we'll see Penn Badgley crying in a park in Williamsburg or have Leonardo DiCaprio flip us off at a museum. It's hype, you text all your friends, deliberate over whether to approach or not, maybe get a selfie, take an extra whiff of the air around them, and move on with your life.

Statistically, however, very few of us will ever live out the life-changing American dream of walking ignorantly onto an airplane, and discover that our seat-mate is a dreamy, bird-boned boy, who happens to be Timothée Chalamet.

This 2019 fairytale became a reality last night for one Twitter user, by the handle @alankruthahaha, who boarded a three-hour flight and found herself seated next to our sweet, gangly king. We are... Jealous? Happy for her? In denial? Currently purchasing NYC-LA plane tickets for no reason and hoping for the best?

Alankrutha live-Tweeted her journey with excellent narrative eye, which, luckily for the hopes and dreams of millions of women, paints a very flattering nice of Timothée. This, is her story:

Y’all nbd just sat next to @RealChalamet on a 3 hour flight and we CHATTED FOR AN HOUR NBD I AM SUPER CALM RIGHT NOW AS EVERYONE CAN TELL
— Alankrutha (@Alankrutha)1549341750.0

As any sensible woman would, she tweeted about it immediately after leaving the plane — realizing that it was her burden and privilege to tell the world what she saw and heard that night. She selected The Office gifs as her emoji of choice — an homage to their mutual affection for the show.

At first, Alankrutha didn't realize what was happening to her.

Not sure it's really Chalamet or not, she informed her seatmate that he looks "exactly like Timothée Chalemet," to which he has the gall to say "I GET THAT A LOT" So coy, so cruel, Timothée.

Thrown off, Alankrutha laid low for a while, doing recognizance. As the reader, we're chagrined at this point: 1.5 of her precious hours with Timothée have slipped past.

Finally, she confronted Timothée about his identity and he actually laughed at her and shook her hand, like the just-slightly smug, devlishly charming baby Leonardo Di Caprio he is.

Once they got talking, Alankrutha hit him with all the crucial questions, like "why are you Timothée Chalamet, extremely recognizable and famous, Oscar-nominated, soon-to-be-if-not-already-millionaire, sitting in economy?"

List of actual questions my dumb bitch mind asked him that he answered super patiently: 1. Why are you sitting in e… https://t.co/8Qpuk2nefv
— Alankrutha (@Alankrutha)1549369609.0

Timothée, who perhaps has watched his fair share of romantic comedies, or just isn't a jaded asshole yet, was apparently kind and inquisitive.

What shocks me the most is this dude wanted to know about me. He asked me what I do, what project management is abo… https://t.co/wTRJKbeYQK
— Alankrutha (@Alankrutha)1549369672.0

Props for getting her name right, we're not sure about the high-fiving, though. In general, it sounded flirty AF.

the BEST discussion we had was about THE OFFICE and which episode we love ( I said dinner party represent) and we d… https://t.co/cmGFuV3NNs
— Alankrutha (@Alankrutha)1549369834.0

She fills in all the juicy, b-roll details we crave:

Finally, their time came to an end. (Friendly nudging!!!)

ANYWAY after a good conversation he went back to his music, and I went back to kicking myself hard for actually hav… https://t.co/70KhoLCYxx
— Alankrutha (@Alankrutha)1549369994.0

The aptly described "pure BABY" even asked if she wanted a selfie before she had to. We stan a considerate celeb.

The flight landed, we spoke for a bit about his upcoming films, he wished me luck for my career (Idc about my caree… https://t.co/qNJKfkl88F
— Alankrutha (@Alankrutha)1549370027.0

She did forget one important question, however.

This pure BABY asked me where I watched Lady bird and I said I watched it in the theatre and his EYES LIT UP I CANN… https://t.co/Bxf8KUXmhy
— Alankrutha (@Alankrutha)1549393570.0

There it is folks: the story of how one Twitter user, who we know nothing about except that she's a funny project manager who flies on planes sometimes, lived the dream and became a legend. Let's hope our heroine never washes her Timothée Chalamet-shook hands, and his stans don't find some bizarre reason to come for her. Thank you, Alankrutha, for your service. You can enjoy the unabridged thread over on her Twitter.

MORAL OF THE STORY- if you work hard enough and never leave your house, you might stumble upon @RealChalamet on a f… https://t.co/RAPfuXn9TR
— Alankrutha (@Alankrutha)1549370098.0