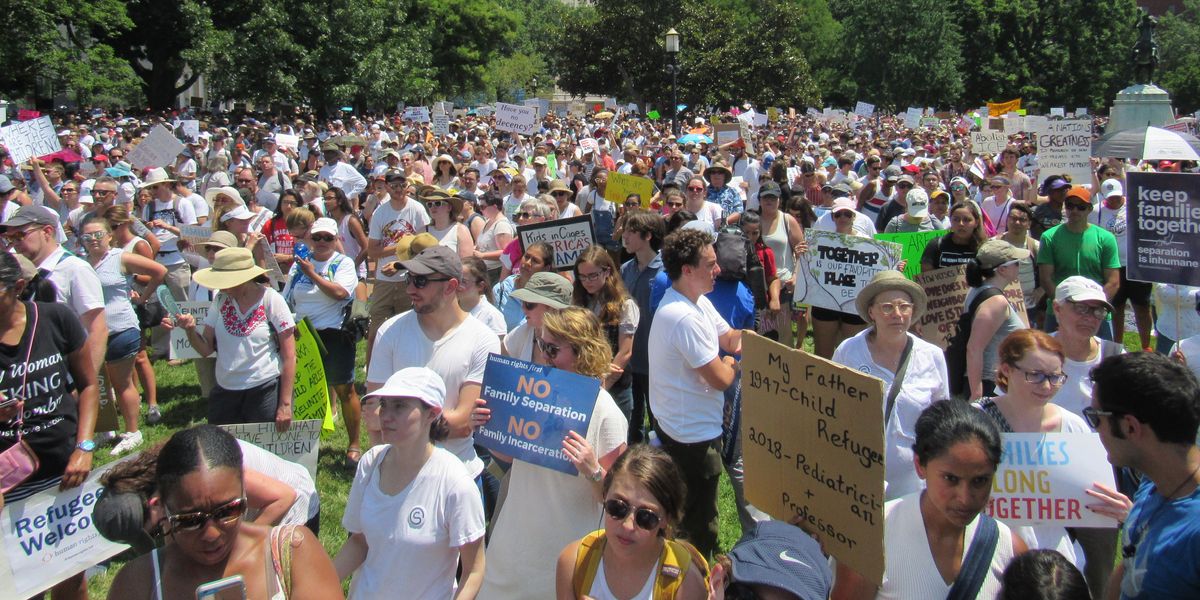 At Families Belong Together Day of Action, Leaders and Protesters Ask, How Did We Get Here?

On Saturday, over 35,000 protesters gathered at the White House to call for an end to family separation and detention. The march, which had sister marches across the country, featured headliners including Lin-Manuel Miranda and America Ferrera. But I spent most of the day speaking to protesters in Lafayette Square, where the atmosphere was balanced along the seam of compassion and rage.

Ai-jen Poo, director of the National Alliance of Domestic Workers and one of the architects of the Families Belong Together campaign, told me she was moved by the day's "powerful" energy. "It's so full of love and righteous outrage at what's happening in our country," said Poo. "We are here fighting for the soul of the country, and this crowd could not be more soulful."

I grew up in Tucson, Arizona, about seventy miles from the border. It's a fragment of land that belonged to Mexico until the Gadsden Purchase in 1854, when it became the last piece of the American mainland to join the whole. I'm white, the daughter of relatively recent westward migrations. I grew up in Tucson's unique cultural mix, often a grateful witness to traditions that were not my own—washing sticky masa from my hands in the days leading up to Christmas in a friend's kitchen, attending gatherings where mariachi music reached for the rafters.

But I also saw the racism and xenophobia that could arise even in this proximity: murmured invective, declarations that English should be the only language spoken. Tucson and the towns to the South are Arizona's liberal bubble, an island that turns blue in election years, but many of its residents live with an awareness that some in their midst would very much like them to leave.

Most weeks, local Laura Fondi visits the White House to serve the president her own kind of eviction notice. I watched on Saturday as she shouted "Get out!" before the gates, her face inches from wrought iron. Her rage is cumulative; Trump's election forced her to confront again the history of a country she thought she knew. "What's sad is the more this kind of stuff comes out, the more I learn about the history of the United States. This might be who we were," Fondi said. "Who we were might be what [Trump] wants. But I think we can be better."

Trump has characterized unauthorized immigrants from Latin American countries as belonging mainly to crime syndicates. At a recent event, he brought out photos of families "permanently separated" from loved ones by death at the hands of "criminal illegal aliens." The president autographed the photos with his spiky scrawl, remarking on one late individual's appearance: "This is Tom Selleck, except better looking." If anyone's looking to penalize irreverence for the highest office, I know where they can start. Still, Saturday wasn't about him. Not really.

Toyoko Vassil was young ("but a wee babe") when her family was incarcerated in a Japanese American internment camp in Manzanar, California. The effect on her family was profound, and she later became involved in the movement for redress in the 1980s. "This issue is real for me," Vassil said. While she was quick to add that she was never separated from her family, the brazen cruelty of the current policy resonated deeply with Vassil.

"You have to think that they really don't care," she said. "It's really a punishment. Which, you know, coming over at an illegal port is really just a misdemeanor. It doesn't warrant this."

Vassil is right. Illegal entry is a misdemeanor under federal law. (Other federal misdemeanors include fraudulent use of the 4-H Club emblem, "drunkenness or neglect of duty by seamen," and the "unlawful importation of honeybees.") According to Title 8, Section 1325 of the U.S. Code, an individual's first instance of illegal entry is punishable by a fine of $50 to $250 and/or up to six months in prison. The penalties for subsequent illegal entries are double the first. U.S. Attorney General Jeff Sessions has instituted a "zero tolerance policy" in the case of illegal entry, meaning that anyone crossing the border illegally is treated, and detained, as a criminal. Many have been calling this a "zero humanity policy."

The reports from these detention centers are harrowing—many of those within sleep on the floor under foil blankets, in cages bound by chain-linked fences. For months, families were wrenched apart. In some cases, mothers were detained separately from their nursing children.

Sabrina Stevens, my colleague at the National Women's Law Center (NWLC), knows that everything is a women's issue; these connections form the throughline of her advocacy and her writing, in and out of the office. I found her at the march with the NWLC contingent, having wisely sought a sliver of shade. Stevens described the Trump administration's approach to immigrant women as a contradictory "Byzantine nightmare."

"You have on the one hand the Office of Refugee Resettlement (ORR), which is trying to force immigrant women to carry babies to term even if they don't want to, and then you have ICE tearing these families apart," said Stevens. "Which is it? Do you want these women to have children and to be with their children, or do you want to take children away?"

It's hard to find a theme to unify the ORR's policies and ICE's other than contempt for the autonomy of immigrant women. And Poo told me that "everything that's happening at the border disproportionately affects women." For example, U.S. Attorney General Jeff Sessions has ruled that fears of gang violence and domestic violence will not count as grounds for asylum. Those who cross the border seeking refuge from abusers will still be treated as criminals.

On Friday night, as protesters put the finishing touches on their signs, the Department of Justice announced that its policy would be to detain families indefinitely while moving them through a threadbare version of the legal process—albeit together. This could result in families spending months in grimly-appointed detention centers like the one in McAllen, Texas. Poo said that such an approach is still far from humane.

Related | More Than a Dozen Ice Agents Call for Its Dissolution

"We believe that it is morally atrocious and absolutely unacceptable to put families in internment camps," said Poo. "We're still talking about camps with children and families who will be traumatized for lifetimes from this kind of treatment. How did we get here, where we're putting babies in cages and families in internment camps? It's absolutely unacceptable. We know there are two main alternatives to family internment, and we're going to fight for them."

Gonzalo Cuervo is Chief of Staff and Deputy Secretary of State of Rhode Island. He drove down to D.C. with his teenage daughter, Stephanie, whose hand-drawn sign featured her own spin on the iconic image that bobbed above countless members of the crowd: the face of a child, gazing imploringly between the bar-like stripes of the American flag. In Stephanie Cuervo's interpretation, the child holds a bouquet of roses and wears a hat with lettering that reads, "We are human." The bars have become a sunburst that radiates out to the poster's edges.

"My parents are immigrants," said Gonzalo. "And I know a lot of people who are in various stages of migration. It's really disconcerting to see how this administration is handling this for what seems to be purely political purposes."

José and Sofia Flores carried a large sign bearing a photograph of their father, who brought his young family with him when he immigrated to the United States from Guatemala. "Through a whole lot of willpower and luck, he was able to get papers for himself and for us," said José. But he and his sister know that not everyone has the opportunity to find safety within such channels.

"We know the dream our father wanted for us, and he accomplished it for us," said Sofia. "I know those parents want the same. If my father hadn't been able to get papers for us, he would have done the same to get us a better life than what we had in our country."

It's not enough, according to José, to begin recognizing the humanity of Latinx immigrants once they enter the United States. Americans must recognize that the policies that make conditions in many countries inhospitable to their citizens originated in colonialism and, later, American foreign policy. "This is a five-hundred-year problem that is not going to be fixed overnight."

José Flores is right to highlight the historical context for family separation, and he was far from the only person I spoke to on Saturday who did so. At the center of this debate is the heightening of a fundamental American identity crisis. If we separate children from their families, if we lock them in detention centers, who are we? Is this willful tendency towards injustice a process of becoming, or a new configuration of the same cruelty at our national roots?

Dora Hughes hears the echoes of history in both family separation and the action against it. "I think back in history, how babies and children were separated from their moms in slavery, children torn away in the Holocaust, children torn away from Native Americans," said Hughes, sitting on the grass with her family. "I don't want to see a return to those devastating practices."

Her young daughter, Bella, leaned towards the phone: "And ICE should be ashamed of what they're doing to families and how they're breaking each other apart." If children are the future, it's looking like the future will bring a formidable wave of activism. I'm all for it.

Related | Here's Why Some People Want to Abolish Ice

With the public's attention currently trained on immigration policy, the movement to abolish the U.S. Immigration and Customs Enforcement (ICE) agency has gained momentum. Sumouni Basu arrived at the protest wearing a white shirt inked with sharpie; on the back, "ICE" sits in a circle, struck through.

Basu pointed out that ICE is fifteen years old. Like an unruly teenager, it needs to be held accountable for its actions. "[Abolishing ICE] shouldn't be a fringe position," said Soumoni. "I think when any agency isn't working, or they're out of control, there need to be some limits. There's been recent reports of people within ICE wanting to break away. I think that's a huge sign that there needs to be a shutdown and a reevaluation of what their work, if at all, needs to be."

The day grew hot, the air thick with the breath of the Potomac. The thousands gathered in Lafayette Square and elsewhere sang along to Hamilton's "Dear Theodosia," led by Lin-Manuel Miranda himself. People jostled each other, the gentle push-pull of a peaceful crowd, as speakers' voices rose to join the odd balloon severed from its ties. In the street outside Farragut Square, children played in the friendly spray of a fire truck's hose.

Elsewhere in America, in cages, families waited together, criminalized. The futures they fought so hard to secure are brutally uncertain. And all for wanting to be part of us.

Despite it all, so many still do.