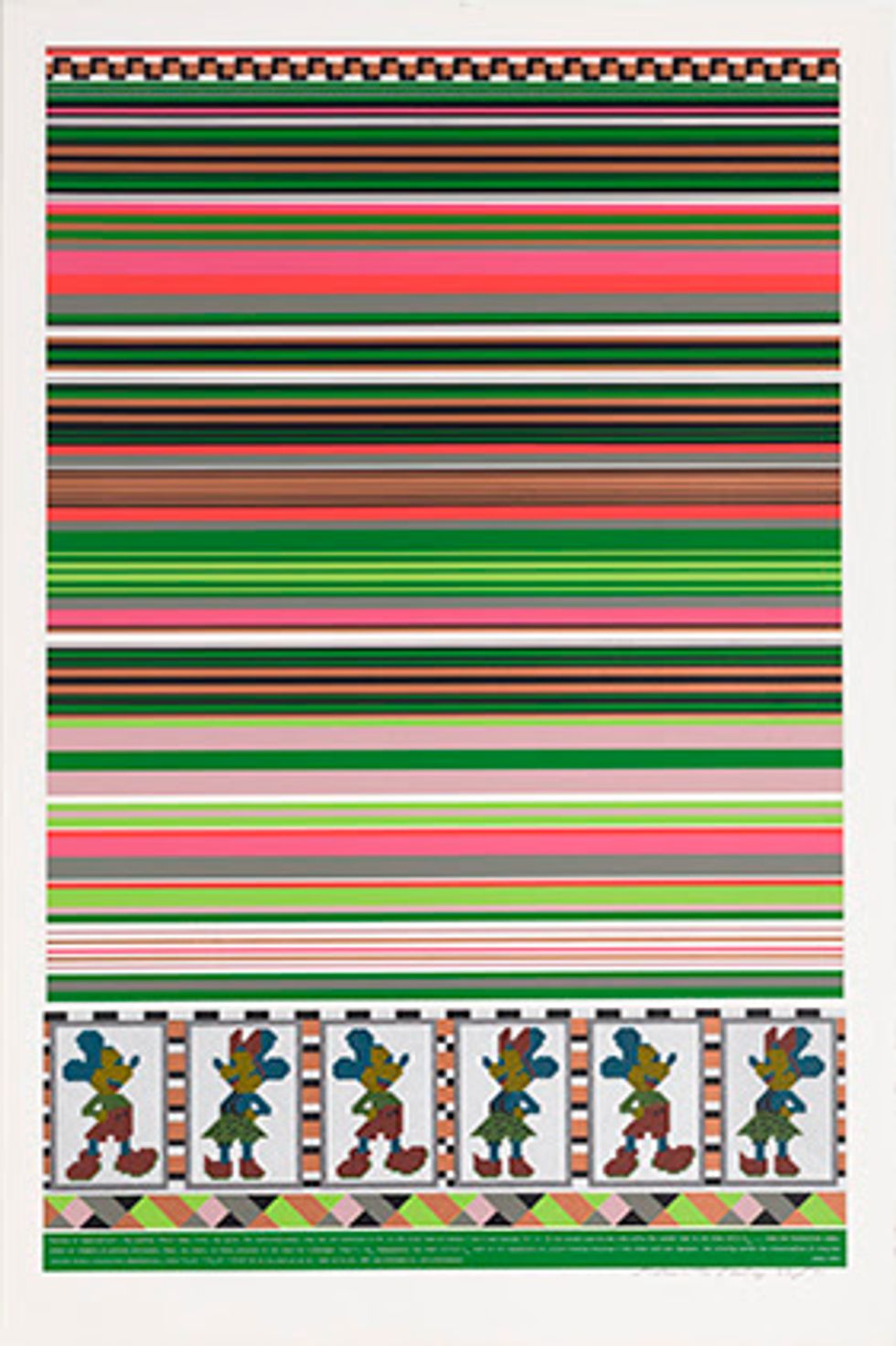 Fall Art Preview: 25 Shows and Events to Catch This Season

Fall is here. The kids are back to school, Drake is back with Serena, you are back in pants, and, finally, the art world is back from its sleepy summer hiatus. From galleries filled with rubble and cake art you can eat to Internet flea markets and so much more, here are all the must-see art shows and events happening this fall.

For his first solo show in New York, Charles Swedlund has taken photography far beyond the conventional 3x5 format. With photo-based objects (like pictures that make sounds when you press them) and interactive games and toys (like a gumball machine that dispenses tradable wooden photographs) participation is mandatory.

Enter a dream world of sound, light and performance at the Dream House, an installation created by iconic minimalist sound artist La Monte Young and artists Marian Zazeela and Jung Hee Choi. Young, who studied with John Cage and worked with Yoko Ono, will give two rare performances inside the space among the light and sculpture installations. It's sure to be a trip.

Scottish sculptor, collage artist and an overall master of juxtaposition, Sir Eduardo Paolozzi's diverse work is coming to Brooklyn. With bright color-contrasted mosaics mashed with pop culture characters, the knighted artist was a innovative voice in the '60s art world and will be a intriguing break from the contemporary programming of most Bushwick galleries.

It's hard to tell exactly what the group show featuring Ashley Carter, Phil Cote, Ray Johnson, and Erin Jane Nelson at the artist-run space in Queens is about, but with a strange press release mentioning a cross breed of flowers by Edward Steichen with a "'personal appearance' of the flowers themselves," it's worth sniffing out.

Painting over images of protests from the '60s and '70s taken from law enforcement manuals on how to suppress and contain riots, Einarsson's redacted paintings are a look into the tension between violence and control in contemporary America. In conjunction with his show at TEAM gallery running in tandem, which will also show sculptures and printmaking, Half Gallery's townhouse layout gives a focused perspective on the project's unique paintings.

Louis B James Gallery is no stranger to transforming their LES space for the sake of an immersive art installation, but with Martin Roth's newest work bringing in actual rubble and debris from a conflict in Syria, the gallery is likely to become unrecognizable. Sounds dark, but we also hear there will be parakeets there amongst the destruction, showing life in the strangest of places.

In tandem with Half Gallery's showing of Einarsson's politically-charged work, TEAM will display sculptures, prints and paintings that focus around the Norwegian artist's relationship with violence in contemporary America, all with a biting humor to help the medicine go down.

If you haven't gotten a chance to see Justin Adian's abstract sculptures in person, the artist's first solo show in New York with Skarstedt gallery (he previously showed at their London location) is going to get heads turning. The colorful shapes made from painted canvas stretched over foam give a satisfying geometric focus with an unexpected texture and sheen, so alluring you'll have to hold off urges to sneak a poke at the artwork.

See a new side of the beloved icon's artwork before Frank Stella's retrospective hits the Whitney Museum in October with a number of works exploring the transition and middleground between sculpture and painting.

Teenage sci-fi UFO art film. Wine and food delivered right to your comfortable movie theater seat. An engaging Q&A with artist and director of the film, Shezad Dawood, without you ever having to move. There are no reasons why you shouldn't go to all of Nitehawk's art films, especially Piercing Brightness.

Shezad Dawood's It was a time that was a time at Pioneer Works
159 Pioneer Street, Brooklyn, NY 11231
September 11 - November 1

Take your art film experience into the real world with Dawood's first solo exhibition at Dustin Yellin's sprawling arts center in Red Hook. Neon sculptures and textile pieces will fill the space, while the film, a collaborative project featuring many Brooklyn artists and youth from the Red Hook Initiative, all exploring the possibility of living in a post-apocalyptic community, will be on display.

Get lost in an immersive installation at Red Bull Studios, where Freeman, Lowe and Herrema explore the history of youth subcultures in an interactive and encapsulating form. A labyrinth of objects, a faux-ethnographic sci-fi short film and a sound installation in collaboration with a number of famous musicians including Kurt Vile, Devandra Banhart and Hot Chip -- it's all about an in-person experience.

Sometimes all you need is a minimalist flyer, an ambiguous title and a giant art space run by the Brooklyn icon painter/sculptor Ray Smith to get us intrigued about a show.  Take risks, see art. Who needs pictures?

Stop looking at the Internet and go see it for yourself! The first-ever Internet Yami Ichi from Japan is taking over the Knockdown Center in Queens for a web-inspired flea market, where artists like Corey Arcangel, Daniel Johnston, New Hive and more will show and sell "Internet-ish" objects IRL. From the lo-fi early meme GIFs alone, this one day, FREE fair is worth going offline for.

Have your cake and eat it, too. But really, this artist is making art cakes for the grand reopening of Stadium Gallery, now located in the Lower East Side, and you will be able to eat them there, because sometimes artists understand what the people want.

Inspired by artist Judy Chicago's permanent installation The Dinner Party, which shows dinner place settings of iconic feminists throughout history, the Brooklyn Museum has commissioned ten women from a high-security correctional facility to create their own place settings with nothing but the materials available to them inside the prison. On the closing night of the exhibition author Wally Lamb and two formerly incarcerated women will discus the importance of creative programs in prisons.

Art catalogs, small press books, zines, antiquated vintage copies, monographs  and every other type of art book you can image will be at Printed Matter's 10th annual art book fair at MOMA PS1. Free to the public, and with over 370 book sellers, you'll want to set aside the whole day (or weekend) for some genuine perusing.

The iconic designer behind many of Madonna's most influential costumes, Scooter La Forge brings his eye for the excessive to a series of new paintings and sculptures, combining ephemera, gifts from strangers, and mixed-media for a pop-infused collection of psychedelic artworks.

Explore the mystery and culture behind Andy Warhol's iconic Jewish muses in a collection of artwork, letters, photographs and objects surrounding their celebrity, including Warhol's own famous works.

In celebration of the 100th Anniversary of the Abrons' Playhouse and of Halloween in general, master puppeteer Basil Twist joins forces with downtown legends Joey Aria and Julie Atlas Muz for a ghostly musical about the sisters who created the playhouse in 1915. It's a haunted Follies-esque spectacle in a digital age, with art direction that takes experimental theater to a new, mind-altering state.

From pop-up theater sets to airbrush drawings to thrift store paintings, the legendary artist Jim Shaw has been clashing cartoons with conspiracy imagery, religion with pop culture, and all types of media for over 30 years. In his three floor retrospective, Shaw's imagery takes over real life like a Roger Rabbit movie, putting reality in flux.

Set to the paintings by Lisa Dodd and inspired by the mysterious life of a praying mantis, Sergei Tcherepnin's newest ballet is composed in light and music as well as movement, bringing a didactic performance to the legendary experimental theater.

After winning the 2015 Frieze Prize it's no wonder that the 29-year-old video artist Rachel Rose is already infiltrating the Whitney Museum. In her first major solo show in the US, Rose will be presenting a series of films and sound environments that play off the architecture of the space.

Traverse the cultural imagery and diverse history of the iconic Coney Island, with ephemera, photographs and works from Joseph Stella, Diane Arbus, Walker Evans, Swoon and more collected from 1861 to 2008. It will be a welcomed nostalgic look into summer as the winter begins to roll in.
You May Also Like
Beauty