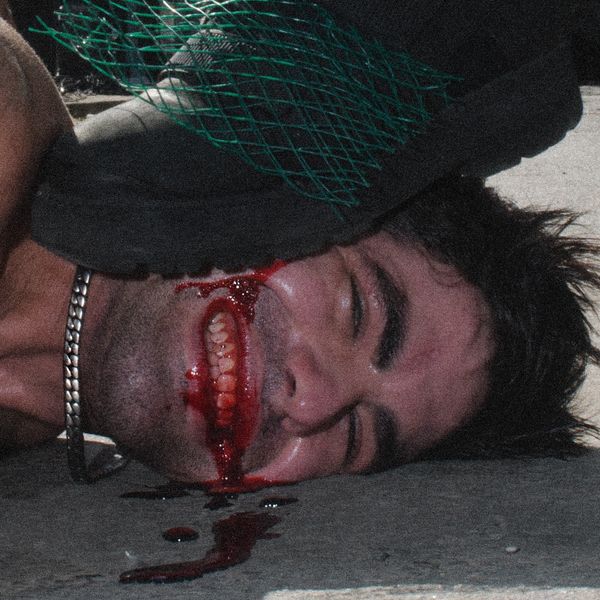 The New York rapper premieres "Nowadays It's So Cool to Be Gay."

It's Pride Month, right? Yay! There's certainly a lot to celebrate in terms of how far the LGBTQ community has come, for sure. But what about those moments that might be more traumatizing, that reinforce marginal positions within larger hetero-patriarchal society? What about those moments of shame, abuse? How do we uphold those stories to the light, too? Not as a representation of our entire personhood, but just to show to ourselves, our community, and others, I've earned my seat.

Enter NYC-based F. Virtue, "your favorite rapper's gay rapper" (but also, tea!). Virtue crafts impeccably written, incendiary songs that grapple with the innate politics of queer identity in his music. In his 2016 track "License and Registration," he spits the line, "I'm too queer to be straight and too straight to be queer."

His newest single, "Nowadays It's So Cool to Be Gay (I Smile With Blood In My Teeth)," features fellow New York emcee and ball scene legend Rozay LaBeija. "Nowadays" is off Virtue's upcoming album Millennial Love During WWIII, and takes notions of visibility and identity politics a step further. It features clattering, industrial co-production by Virtue and Skinny Atlas, and searing lyrics describing brutal scenes of gay bashing — hence the origin of the "I Smile With Blood In My Teeth" subtitle.

The song also profoundly examines aspects of gay sexuality that are often shamed, while calling out the liberal trendiness of public figures (or just regular people) who claim "alternative" sexual identities simply because it's en vogue. This kind of honesty about the experiences that shape personal, political, and global attitudes around queerness, is eye-opening and liberating for all who are able to receive it. Furthermore, Virtue's choice to share about gay bashing contextualizes the truth of why people falsely claiming queer identity might want to reconsider: there are real-world, insidious, and unfortunate consequences that come as a result of a punitive society that still marginalizes gay people, despite how far we've come.

In a candid interview with PAPER, Virtue says that the track was born, of course, from personal experience that isn't uncommon from many queer narratives. "I grew up in a hyper-masculine place where I didn't know a gay person until I left," Virtue says.

Virtue says that "Nowadays" was inspired by acknowledging, and ultimately accepting, his femininity in such a world that praises and rewards masculinity. "[Growing up] instilled this feeling in me that being a bottom was feminine, feminine was bad, and I was masculine," he explains. "I used to pretend I was a top just because it 'fit' my personality. And when I finally accepted that I wanted to bottom, it felt like coming out all over again. That's all so sad to me. Anyone can do or be anything, and masc and femme energies can't be inherently negative or positive, it all just is. Us and our experience, and who we are."

"Nowadays" not only finds Virtue proudly claiming his identity as a bottom, but exploring how public figures use queer sexual identity as a trope to make them more interesting. "It feels like every pop star has to claim bisexuality just to be relevant, and it's great because it provides visibility, but it's frustrating because when it's a stunt, it's dishonest to all of us who really struggled or struggle to be ourselves."