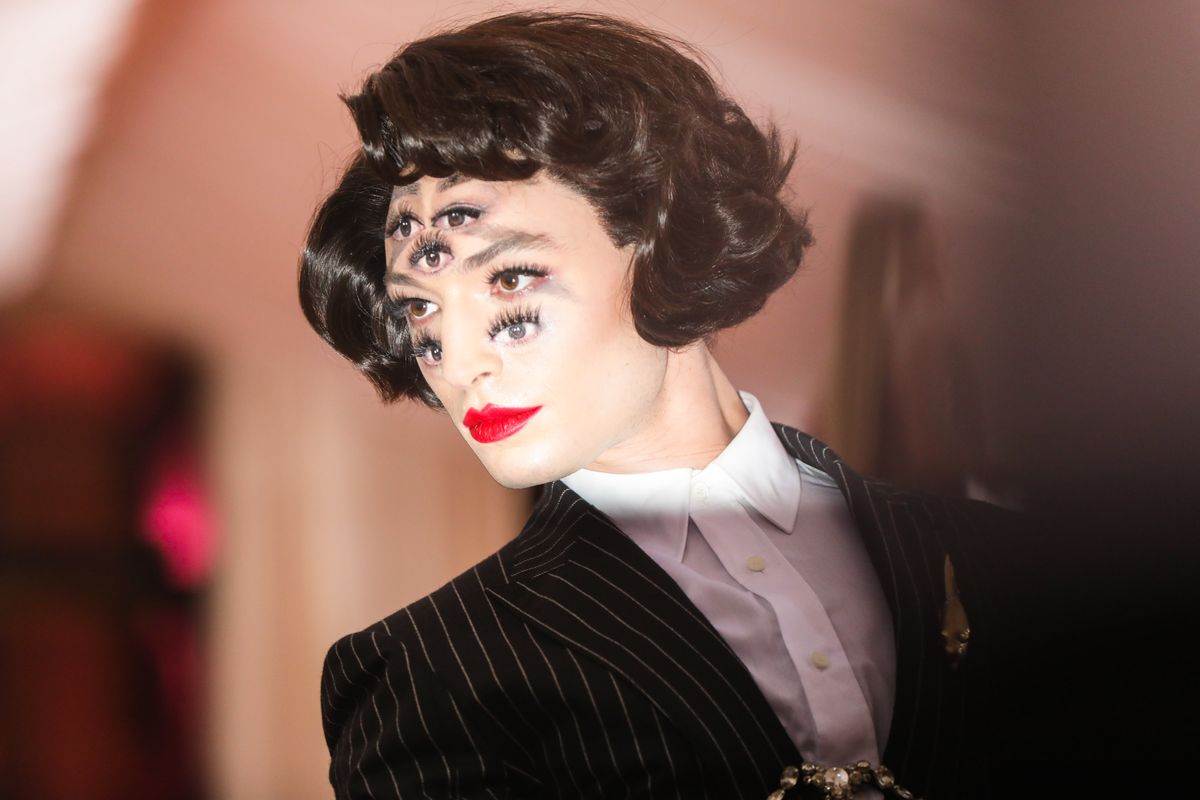 Ezra Miller has solidified themselves as a red carpet risk-taker, so the stakes were naturally high for their Camp-inspired 2019 Met Gala appearance. Last night, the actor, singer and style star turned up wearing head-to-toe Burberry (by Creative Director Riccardo Tisci) — a slick, pinstriped suit with long, dramatic train and crystalized corset.

When Miller arrived, they held an unsettling mask to their face, allowing for a shocking reveal in the form of seven eyes (complete with lashes and brows), all painted by Vancouver-based makeup artist Mimi Choi. "The multiple eyes represent their layers hidden beneath an exterior mask that was revealed on the red carpet," she told PAPER, speaking to Miller's interpretation of Camp.

Choi, who worked on PAPER's Halloween cover with Jazzelle Zanaughtti, has built an audience for the wild ways she uses makeup to trick the eye. Whether she's creating a full wave that extends up from her shoulders, or a bloodthirsty cheetah with monstrous fangs, Choi's vision of beauty explores ways that makeup can create mind-bending optical illusions using the human body.

Below, PAPER caught up with Choi to talk through Ezra's inspirations and the products used to achieve their surreal Met Gala moment.

How did Ezra discover your work?

Ezra discovered me through their publicist, who had been following me on Instagram for a while. She introduced my work to them and they said that they've loved following my progress ever since.

What did Ezra want to accomplish through their Met Gala look?

Ezra's interpretation of the theme "Camp" is an ultimate transformation that everyone goes through at least once in their lives. The multiple eyes represent their layers hidden beneath an exterior mask that was revealed on the red carpet. Before the event, Ezra and I had an in-depth conversation about what we wanted to achieve together and it turned out that our visions were aligned as we both had one of my past illusions in mind: a kaleidoscope look. I was excited that they wanted something so bold and from there, we worked together and made minor changes throughout the process to complete the look which they completely rocked.

How do you see your point of view represented in this makeup look?

I love Ezra's entire concept. To me, the look represents the different sides, emotions, and alter egos that we as individuals possess. We are often afraid to express our hidden layers, but sometimes we need an outlet to reveal ourselves in our true form to the world without fear. It is such an incredible feeling to be unapologetically yourself and proud of it.

"To me, Camp means ignoring the traditional definition of 'normal' and discovering what is normal to you. It's about expressing your true self without the fear of judgement."

What was the process like for creating these eyes?

We started the makeup process at 4 AM and took about 5 hours to complete the look as we adjusted the concept slightly and played around with the positioning of the eyes. I really enjoyed the spontaneity and collaborative nature of the process, as Ezra has such a creative mind and is an incredible canvas to work on. Although the makeup look was completed by 9:30 AM, I stuck around throughout the day to touch up the look. As we started the process early in the morning, I knew that I had to use products that would last all day and late into the night.

Which products did you use?

Some of the key products that I used included the Mimi Choi Illusion Palette by Mehron, Kryolan Aquacolors and Eyeshadows, Make Up For Ever Artist Color Pencils, and false lashes by Velour and House of Lashes. I used Ruby Woo by MAC on Ezra's lips.

What does Camp mean to you?

To me, Camp means ignoring the traditional definition of "normal" and discovering what is normal to you. It's about expressing your true self without the fear of judgement. I consider my makeup style Camp because I go beyond the social norm to express my own unique visions. It is how I feel inside — my normal — even though others may find it bizarre or unusual.