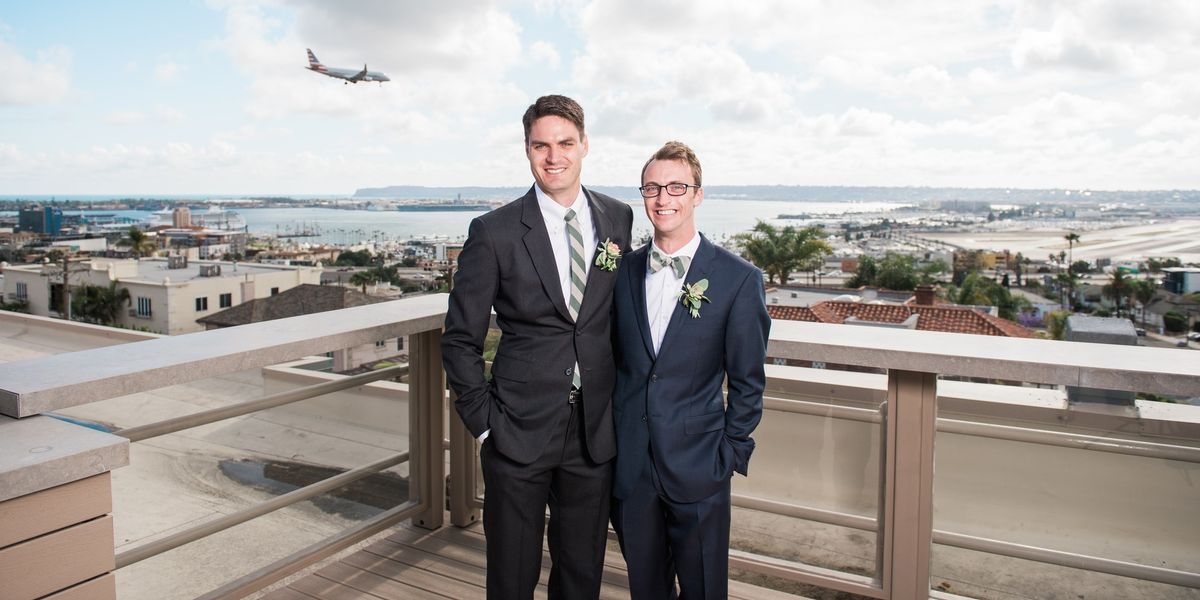 Being apart is a struggle for any couple, but particularly when living and loving over long-distance is dictated by a job and out of your control. For Steve Barber, 31 and originally from Carlsbad, CA, and Jimmy Stokes, 28, from Spring Lake NJ, their jobs with the Navy brought them together, but also enforced a certain amount of long-distance dating.

While both Steve and Jimmy attended the United States Naval Academy, they didn't overlap while there, and didn't meet until 2012. That summer, they both were stationed in Japan in cities about 40 miles apart, Jimmy in Yokosuka and Steve in Atsugi.

Their next assignments were not quite as near at hand. Both went back to the US, but Steve was in California, while Jimmy was off to Florida. "After doing the long-distance-thing for about a year and a half Jimmy was able to convince the Navy to allow him to take orders in Ridgecrest, California as well," they recall. "For the first time since we started dating four years prior, we were finally able to be in a normal relationship."

To avoid the possibility of being split up again, Jimmy looked to move out of the Navy. Another move saw them heading to San Diego. "We both figured that there would be no better place to get hitched than San Diego," they note. They didn't go through a big to-do over the proposal. "One day, Steve simply asked, 'Should we get married in a few months?' And the rest is history!" they say. "We found an incredible apartment in San Diego with a view to die for. The roof of the building seemed perfectly suited for the nuptials and we had already determined our favorite restaurant in the city, Richard Blais' Juniper and Ivy," (handily, just four blocks away from their home in Little Italy).

"The wedding was incredibly small," the note. "Us included, the wedding was 14 people total." They kept the guest list intimate, inviting a few family member, including both sets of parents, and their siblings and spouses, with Steve's cousin Lacey officiating.

"Jimmy's mom was adamant to provide something for the wedding, so we allowed her to purchase our ties. We chose matching pieces from TietheKnot.Org," the grooms recall. But they had a twist, which included having their dogs as ring bearers. "Without Jimmy's Mom's knowledge, we bought two more bow ties in the same pattern for the dogs to which we affixed the rings. When it was time for the exchange we called their names and they pitter-pattered to us, rings in tow. It was a nice surprise that everyone seemed to like."

A couple months into married life, Steve and Jimmy already seem to have found one of the secrets to a long and happy life. "We express love every day by communicating well," they share. "Sometimes, grand gestures are not necessary when you can receive a simple 'I love you' in a text message.