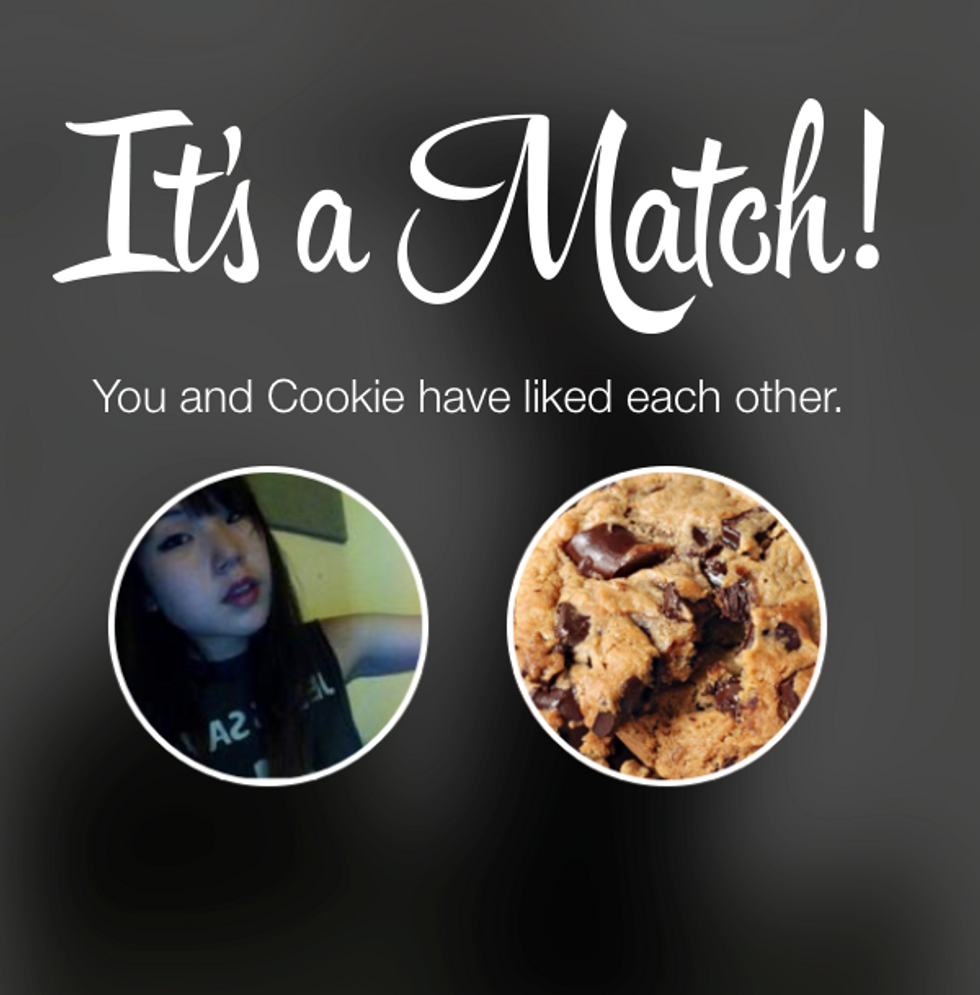 Exploring The Underbelly of Food Tinder With User "Everything Bagel"

By Sandra Song
PAPERMAG
If you're a regular Tinder user, you've undoubtedly come across a few weird profiles -- including the occasional "Food Tinder" profile -- Ã  la pizza, guacamole and cookie (not Lyon, unfortunately). You may wonder though, what kind of gluten-minded geniuses are behind these tasty riffs amid the rotten cesspool of Swipe-Lefters on Tinder? Well look no further, because we buttered up (lol) to the dude behind an "EverythingBagel" account and had him give us the inside scoop on the underbelly of food-themed Tinder profiles. Read our Q&A below.
So why start a food Tinder? Where'd you get the idea?
I was at work one morning having my almost daily everything bagel. I took a Snapchat of it because it looked delicious and made the caption "I can be your everything" with a heart and sent it to some friends. [Then] I remembered I had made an extra Facebook account to play games and stuff and thought it would be funny to connect it to Tinder as an everything bagel and make that my caption...I thought it would only last a few days but it turned out to be pretty hilarious.
Are you an active user otherwise? Do you have a 'real' profile?
No, I don't have a real Tinder account. Never been an advocate of the online dating thing, it seems weird to me.
There are a surprising number of these floating around, why do you think that's the case? Is it a play on how dumb and superficial Tinder is? Is it all just an elaborate troll? What do you feel like you're getting out of it?
I honestly had no idea there were other Tinder accounts of food. I don't think there is a huge percentage of people that are actually interested in going on a date with someone off of Tinder, but I could be wrong. Like so many girls have bios expressing things like "Haha Tinder is a joke" or "I'm just here to look at pictures of your dog" -- so I decided to make it an actual joke. My Tinder is definitely just a troll, but I wouldn't say it's elaborate.
Why did you choose to be an everything bagel? Why not a pizza like most of the other profiles?
Because I love everything bagels and so does everyone else. Also...pizza is just too easy. Having a Tinder as a pizza would be like wearing a Kobe Bryant jersey to a Lakers Game.
Have you had any romantic success with the EverythingBagel?
No, but that's also the last thing I'm interested in. I can definitely sense that there is a potential for a possible romance stemming from a Tinder account as a food, if one were able to make a smooth transition from food to human without seeming like a total creep/sociopath. But let's just say I would rather find romance at a Walmart.
What are typical conversations like?
The majority of the messages I get are things like "I want you in my mouth", "I love you", "Be my everything", "Hey there sexy", "Could this be true love?" or just a bunch of those heart-eyed emojis. Depending on the message I'll respond with an appropriate bagel or breakfast pun, but most of the time I don't even answer those. Every once in a while though someone will say something pretty genius and it makes for a pretty hilarious conversation. Sometimes I'll get my friends involved and come up with some clever shit about bagels -- and we'll go back and forth for a while, but once the bagel jokes run out I pretty much just stop answering. I would say I've probably had about 5 or 6 conversations that were actually quite entertaining and the ongoing bagel puns and double entendres are really impressive. [Like], here's a piece of one of the more recent conversations I thought was pretty good:
Girl: Do you want to go to the bar tonight and get toasted?
Me: Well I usually get baked at 4AM, then I wake up and get toasted. Then I vibe out to my favorite jam.
Girl: Thats quite a day, hopefully you remember your keys after you get toasted or you will have to deal with a loxsmith.
Do you find people to swipe right more often as a food item? Do people tend to strike up more conversations with you?
Yeah, I assume they do. I have almost 500 matches. People message me all the time, it's just a matter of whether I feel like it's worth it to answer or not. I can usually tell off the bat if someone is going to have something good to say. I've seen girls get some pretty creepy, pathetic Tinder messages. It's probably nice to just get a laugh.
You May Also Like
Internet Culture