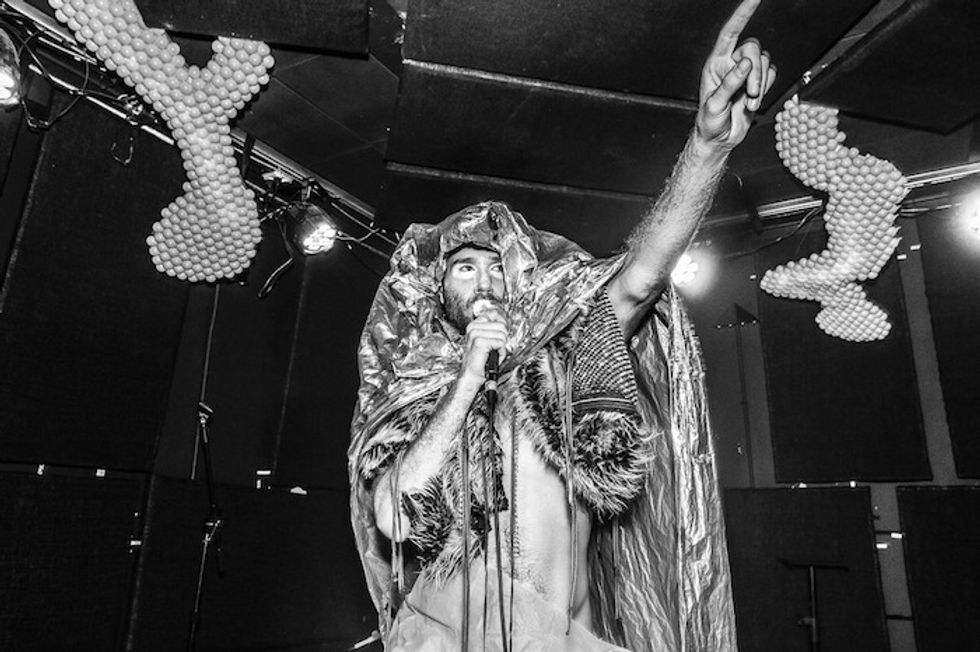 While straight sex parties seem primarily to be tied to the city's burgeoning burlesque scene, separate from traditional nightlife spaces, the queer, polyamorous party kids of New York see sex as an integral part of the nightlife experience. We asked Boywolf, performance artist, co-director of Brooklyn art collective The Culture Whore and former host of a full moon-themed sex party to tell us why public party play is finally making a reappearance decades after the advent of AIDS helped stigmatize gay sex.

When was the first time you had sex in public?

The first time I can remember was very closely connected to coming out. It was with the first guy I had sex with but before we had sex, he and I hooked up on the soccer field in front of our dorms, and it was at night and it was dark, and I don't know how many people were watching exactly, but it was in the open.

And when was the first time you intentionally had sex when you knew that other people were watching -- or just in a space where they could see you having sex?

I guess maybe going to a bathhouse in South Africa was the first time I ever experienced something like that. My junior year of college I studied abroad in South Africa and one night I went out to a bathhouse there and there were guys walking around and steam rooms and jacuzzis and little rooms you could go into and have sex, or you could have sex out in the open. There was a dark room, a room with a screen where they were playing porn, and I remember having sex on the cushions and people were watching and trying to join in.

Did it feel communal?

Which do you think is sexier?

I think a lot of queer people feel like sex should implicitly be a part of communal experiences, why do you think that is?

Because it's explicitly a part of the human experience, and it's one of the best pleasures we can have, so why would we be ashamed of it or try to hide it? It's kind of crazy to me how stigmatized it is.

So much of nightlife is geared towards finding sex, and it seems like it just makes sense for there to be an immediacy to it.

I think all the time about how much it sucks that there's just not spaces you can go to on a regular basis just to find someone to have sex with. It's all on apps now, which is a whole different type of experience. Meeting someone at a bar or a club, there's a whole dance around whether that person's available or actually wanting to fuck, but there used to be spaces in New York City -- whether they were bathhouses or dungeons or dark rooms -- where if you were horny and needed to express yourself like that, you just went and did it.

Do you think sex parties -- or parties where sex happens to a large degree -- are reintegrating cruising back into the queer experience?

There's a whole group of young, faerie sissy boys that will find each other in corners of parties -- or right in the middle of the dance floor -- and get photographed by blogs. It adds to the fantasy of the party, people love it.

You were throwing a sex party for a minute in different people's apartments, tell me about that.

It was called Lunacy and it happened on full moons. It was a ritualistic sex party where we would do a ritual or more than one ritual; there would be certain libations and sacraments, and it was an intentional space for sex to happen. It was cute, people met each other, there were some sexy moments. But I ended up feeling like I was involving myself in too much friend/sex/family/romance situations that stressed me out a little bit.

That's also a big part of queerness -- a lot of us have these very incestuous relationships and friend groups, where we're all not only friends but are sleeping together. How do you think that changes how we party?

It's very complicated. When we go out, sex is always around. But it also lets us be really free and open with each other. We don't have to necessarily worry about finding someone to express our bodies or our love with, because we can do that with each other as friends, and maybe that means we're actually going to fuck, or maybe it just means we're that comfortable with each other's bodies that we can be all over each other like that. Or not, and everybody is in it for the pleasure.

You're involved with the Black Party, an annual event that has a long history of including sex in a party setting -- what is its legacy? And how does it fit into the context of contemporary nightlife?

The party legacy comes from the Saint, a club that was a space like I was talking about earlier, where people knew they could go to meet someone and have sex, but it was also the grandest, most elaborate, expensive mega club that had been built in New York City, and it was built for gays, by gays. It was a temple of sorts, and I think that spiritual energy carries over into the nightlife of today, and that particular party especially. It feels like the rites of spring or a purging, communal experience.

Do you think that the mainstream gay agenda, which has been so centered on normalization and marriage equality, is aimed towards desexualizing queerness in a way that having sex in public actively fights against?

Yes, and you can see it across the board with almost every gay figure that's presented in the mainstream -- they're kind of presented as asexual, or as a total stereotype of a top or a bottom.

How do you seek to create spaces that aren't oppressively sexual and foster inclusivity?

That's particularly difficult for a party that's intentionally about sex, because the crowd is probably going to follow whoever is throwing the party. But in certain situations where you have a fluid environment that sex accidentally happens at, in those cases people are pretty respectful of each other. But it still can be really triggering for people, seeing someone that you're attracted to give a blowjob to someone else you're attracted to, and it's a mind fuck. It's hard to not affect people's feelings with sex happening, I don't really think that's possible. But if you're in a community where people try to respect each other and have an awareness of the space and how the space is being shared by other people -- it's always a negotiation, but everyone has to be accountable for how much space they're taking up and the manner in which they do it.

What's the sexiest thing you've ever seen at a party?

I keep thinking of all the unsexy things I've seen at parties, like ugly go-go dancers dancing badly.

What about the sexiest thing you've seen or participated in.

Anytime I get to fuck to the beat of serious techno, which has happened a good amount of times in my life, it's really fun, and those moments can feel like they're going on forever.

You were in Berlin last year, where the line between sex and partying is even more blurred...

And the straight people do it to!

Is that something we should be aspiring to?

Well it's Europe and it's a different mentality over there in general. But yeah, I don't understand how our American western culture got this way. it's really fucked up. How in the world do we let our kids get washed over with all this violence and teach them to be afraid of sex? It's crazy. It's all about love, that's what sex is about.

Where do you think that stigma about sex comes from?

A lot of the stigma around sex has to do with AIDS and HIV. We were talking about the legacy of sex parties and people partying with sex -- in the '70s, before HIV happened, people were exploring that in a very deep way, and the gay community was reaching an almost enlightened state of pleasure that had to do with a newfound spirituality and a very clear understanding of art and the world, and so many of those people died. I feel like we carry on their energy now by trying to put the pieces back together of whatever type of paradise they were reaching towards.

Do you think we're getting there?

Yes. But I'm an optimist.
You May Also Like
Music