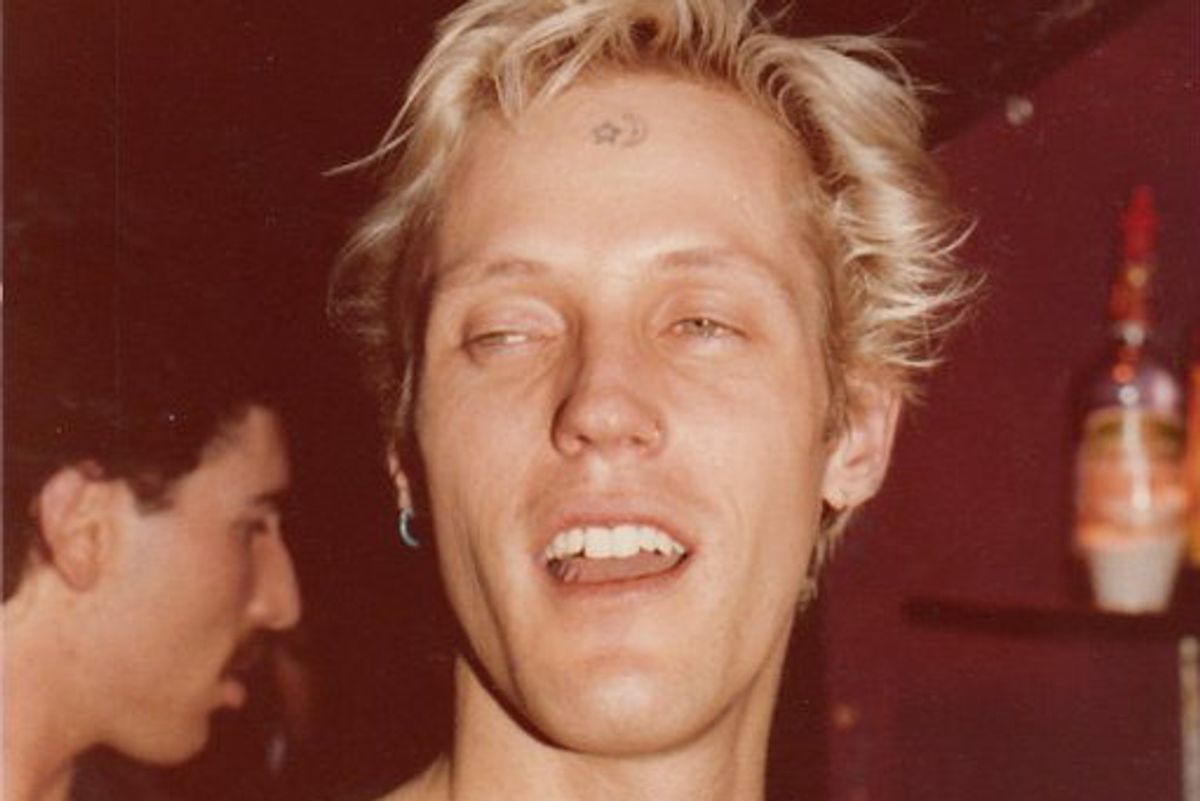 Hurrah, Danceteria, the Continental...Having worked the door at all those '80s haunts and more, Aleph Ashline was up in the grill of some wildly memorable nightlife. But the retired club worker from Santa Barbara made it through, thanks to a spiritual centeredness and a savviness as to when too much had gone too far. I caught up with Aleph for his remarkable story.

That's not much at all.

A drop in the bucket. By the way, I read the article about your accident. In it, you said you never want to miss an appointment. And you didn't. I'm impressed; it's 3:03 PM.

I actually waited three minutes so I wouldn't seem so pathetic. Anyway, what's the first club you did the door at?

Hurrah. I was working at Ruskay's, a restaurant on Columbus Avenue. Robert Boykin was one of the owners of Hurrah and would come in after work and flirt.

Did you sleep with him?

No, I didn't. He was definitely headed there, but it didn't ever end up there.

And how did he happen to offer you the job of doorman at Hurrah?

To the best of my recollection, it was force of personality. I had the look—spiky, white hair and whatever I was doing fashion-wise at the time. He had a penchant for blonde boys. He'd ask for me because I was one of the overnight waiters. I became his regular waiter. I was friendly with him and let him do cocaine at the table. They had mirrored tables! This was in 1979. After about a year, I went from there to the first Danceteria. Haoui Montaug and I had been at the door of Hurrah. I learned everything from Haoui. We became fast friends.

Hurrah had such a New Wave-y crowd that was very much of its time.

Yes. It was very fun. I met David Bowie and a bunch of other people. In those days, if you scored a job like that…I got paid $200 a night in cash, and that was four nights a week. That was $800 a week with no taxes. Of course I didn't save any money, but it was an amazing stroke of luck.

What did you spend the money on?

I just paid the bills and ate food and paid for my drugs when I had to. When one's a doorman, one does become a bit of a coke whore.

Usually it was in the form of drugs. Somebody would hand me a little vial. If anybody handed me money, I don't really recall that.

A lot of those New Wave-y people were very snooty, like they were too cool for school, no?

Yes. Even the punk rockers were snooty. I'm gregarious, so that uppity, strike-a-pose thing didn't sit well with me.

If someone gave you attitude, did you deny them admission?

Very easily, yeah. I'd already been waiting tables for years. I'd be like, "Don't take that tone with me, you little turd!" [laughs] Haoui was the same way. I was a little more blunt about it. But the people we turned away more were…

Exactly right. Especially if they were all male. When I worked the Mudd Club, [owner] Steve Mass would say, "I don't want any groups of guys if they don't come with women." You'd see guys striking a deal with women in the street, to get them to come with them so they'd get in. We saw what they were doing, and wouldn't let them in. One guy at the Continental [an after-hours club] got so mad he threw a bottle at me from a car. Fortunately, it missed me.

What was the order of clubs you worked at?

Hurrah was first, then Danceteria, then AM-PM—I was a running joke; "Where's Aleph working?"—then Jefferson. Mudd was somewhere in there. I worked there after Gennaro Palermo, just for a couple of months. I was a blip on the Mudd screen. Some of them I was working simultaneously. When I was working at Continental, Bobby Bradley hired me for the Pyramid.

Who were your favorite people to talk to at the door?

Bowie was always relaxed. I met him three times. Your old pal [nightlife columnist] Stephen Saban was always one of my favorites. And [club major domo] Fred Rothbell-Mista, who I actually knew from Boston.

You always projected a personality that was sunny, not troubled. Maybe that's why some people tried to take advantage?

I'm not confrontational, but I have a low tolerance for too much bullshit. There was the time I wouldn't let David Lee Roth into AM-PM because he was such an incredible dick. He was drunk, he thought he was king of world, and he pushed people aside, shoving up to where we were standing. I didn't know who he was-- someone had to tell me. He was trying to tell me a "Do you know who I am?" kind of a thing. I don't think I knew who Van Halen was. That wasn't in our circle of things to care about. I still didn't let him in. He and his friends were getting pissed and looked like they were maybe gonna cause some violence. Kenny O'Brien, a girly gay guy with a raspy voice, who always wore leather, finally convinced me to let him in. [Manager] Vito Bruno came out and told me I shouldn't have let him in. But mostly it was very easy. For me, it was like hanging with the cool kids, which I never did in high school.

Were you spiritual? What was your world view?

It was and is pretty basic, like maybe Buddhist would be the closest thing. I grew up in California, so I had a good strong dose of all that, with LSD and everything. Live and let live, be tolerant and relaxed about everything.

But how did you rectify that with the fact that clubs are so frantic?

That's the Buddhist thing about staying in your center. I was calm. That's in my nature.

Even with David Lee Roth?

Even calm people can be provoked. [laughs]

Did you have a larger plan at the time that went beyond nightclubs?

No, and I wish I had. I started taking too many drugs because it was so easy. That leads up to when I left New York because I was partying along and then very stupidly I started using harder drugs. Right then in my head, it was "This is too far." I couldn't see how this could end well. This was '84. I went back to Santa Barbara, and never did another drug in my entire life. Without rehab. I don't think I was addicted in that intense way. I just stopped. It was very weird to leave New York. At that time it was very, very fun and Santa Barbara was not fun. The fun had to be found in a different way.

What club were you working at when you left New York?

The Pyramid was the last one. It was a drug den. I have some great memories of there too, one being the lovely [performance artist] Ethyl Eichelberger. Amidst all the drag queens, it can be quite catty and bitchy. She wasn't like that. She was more to my kind of personality of sort of floating around and allowing whatever was happening to happen without getting involved in the catty details.

And where are you today?

I live in Albany. I've been with my partner for 31 years. I'm retired, which is absolutely fabulous. I do art work for myself—I thought I'd be an artist, then decided I wasn't good enough to pursue it in a serious way, so I do it for myself. I sound like a housewife and I have three grandchildren as well.

When you were a popular doorman, were people throwing themselves at you for sex?

A little bit, but I didn't take anybody up on that. This was before AIDS. But because I got high with all these people, we'd go places afterwards, and one thing would lead to another. The actual stopping and having any kind of a relationship is what saved me from getting HIV. I was almost asexual during those times.

How did you meet your partner, Don Paul Shannon?

I met him in Santa Barbara through a mutual friend. It was a love at first sight thing. We still get along like gangbusters.

Oh, the stories you could tell him!