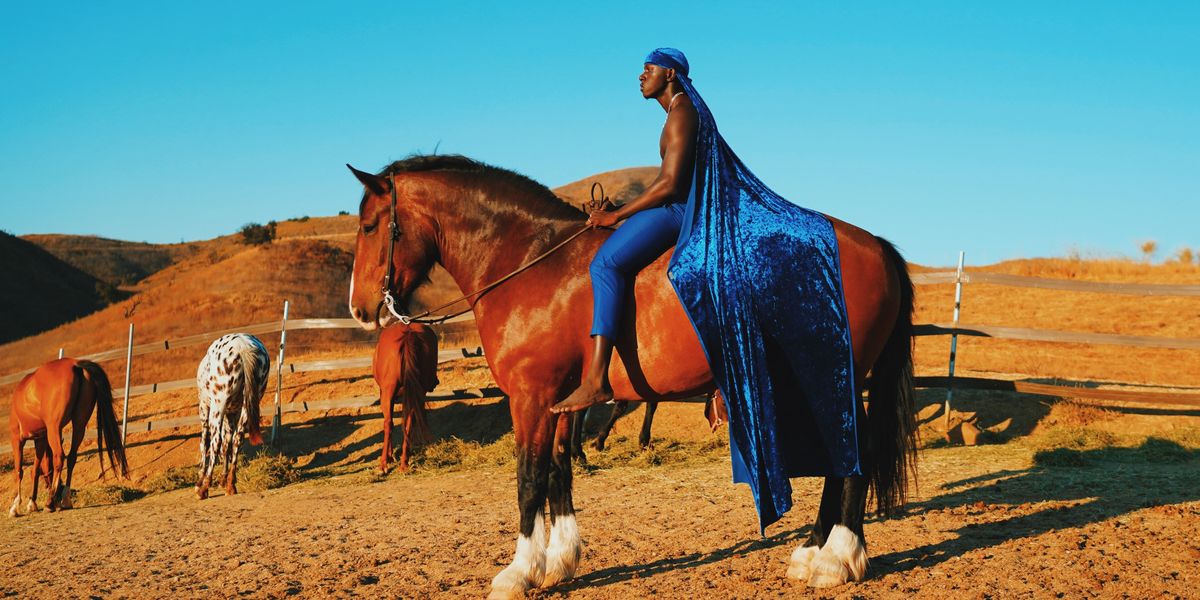 August is officially National Black Business Month and PAPER is showing love to some of our favorite Black-owned businesses throughout the entire month. Our dedicated series, Booked x Busy, is all about shining a light on the entrepreneurs and brands that embody Black excellence.

A hypocorism of the fashion designer Evita Mensah's given name, custom label Evita Loca — best known for its full-body durag cape — positions Black culture at the center of its works; Its pieces visually representing Black heroism.

Founded in 2017, Evita Loca came to life at the inaugural Durag Fest in Charlotte, NC, an unapologetically Black celebration that honors the durag as a cultural staple. Wanting to further reclaim and redefine the often negative narrative associated with the accessory, Evita Loca decided to innovate the durag unlike anything seen before. Her first iteration, a black sequined, ankle-length durag, instantly cemented the self-taught fashion designer as one to watch.

Evita's designs have since been featured by stylists like Beoncia Dunn from Beyoncé's Black is King, commissioned by model/DJ Vashtie Kola for a custom lace durag wedding veil and showcased in exhibits across the country.

PAPER sat down with the designer to chat about how one small, but powerful item has taken her so far, the breadth and beauty of being a Black woman in fashion and how her Gold Coast roots manifest into her creations centering on Blackness.

What does the symbol of a durag represent to you?

The durag is a staple piece of Black culture and literally the preservation of Black beauty. Growing up in the early 2000's, for me, getting caught walking outside the house wearing a durag would be considered "ghetto," "thug," or "low class." I couldn't even walk to the mailbox with a scarf tied on my head. My Ghanaian parents would have lectures waiting for me about appearance, what people would think of me dressed in such a way or how lazy it could make me look.

Even in music videos when artists would wear durags, they were either rolled up in the back or tucked in a hat or sweatband. It seemed sort of subdued like it couldn't be all the way free if it was to be accepted by the mainstream. It became my metaphor for Black culture, and I wanted to challenge all those ideas with the creation of my full-bodied durag. It's beautiful, open, unapologetic and for everyone who accepts all of what it means to be Black.

When did you know that fashion design was your destiny and what inspired you to be a self-taught designer?

The idea of becoming a designer grew on me over several years, but I think I began to take it seriously as a high school senior. I didn't get any designer clothing as a teenager, so I got creative with what I was given. Being the youngest of three girls, my sisters would take turns mixing and matching inexpensive bargain pieces from local thrift shops or discount department stores. They were masters at pairing looks and setting trends. Soon after they were moved out of the house, I would continue their legacy of making something out of nothing. I would rack up on cheap finds with my mom and beg my dad to take me to this massive flea market in South Carolina. There I would go straight to the used shoe tent. On good days If I looked hard enough, I could salvage some lightly worn retro Jordan sneakers.

The idea of what made clothes fashionable intrigued me and I started a fashion club at school with my best friend Tiana Sutton. Even more fascinated, I took an apparel class where I learned to sew, and at the end of my senior year, we put on a fashion show where I sewed dresses and tops for the models. My creations were well-received by my peers, it was then that I knew I had found my calling.

Briefly take me through your design process, from ideation to execution.

My ideas usually stem from abstract and exaggerated perspectives and ideas or little things that made me happy as a kid. I'll fixate on something, pick it apart, daydream about it and put the idea back together. Sometimes I'll listen to a song that doesn't have a visual and I'll pretend I'm making something for the mood I think the song portrays. From there, I research and pick out fabric from what I have. I'm always collecting fabric that I think looks nice. I then figure out how I want the garment to look and sew it.

You created the first-ever durag cape. What would you say your number one superpower is as a Black creative?

Having the ability to recognize pain and joy in its many form, and create a beautiful translation of it.

You integrate a lot of strong, Black cultural figures into your work. What does it take to be a strong Black woman in the world of fashion?

Being a first-generation American, by default, I had strong, Black women around me growing up. They were always constantly reminding me who I was and how much I was loved. I think that's the key: having a constant reminder that you are made of strength, grit and love. And to preserve your inner-child — it's what makes you special.

Have there been any challenges or pushback from the industry since you are essentially taking your power back and controlling a narrative through your work?

It's so funny that many in the fashion industry love the idea of promoting diversity, but they accept shameless behavior, like keeping Black women in fashion and women, in general on a lower level by stealing our ideas. It's okay to be inspired but taking on a full concept as your own with no intention of recognizing the original work is wrong and pervasive in the industry. That comes on top of belittling and bullying female designers in an industry where most of the consumers are women. In that sense, there is always push back and I'm just not down to play games. My work is a response to that.

What does it mean to be a Black-owned business, especially when the Black Lives Matter movement is getting so much attention?

It means that we have the double-duty of driving our products and normalizing the accomplishments of the Black business owner. I think it's important for us to take full advantage of the attention. Although it's negative attention, we can use it to teach society to humanize Black people and Black culture. Now is not just a moment but a movement to highlight the effects of a people who have been objected to the perils of individual and systemic racism.

How has the COVD-19 pandemic affected Evita Loca?

I have seen nothing but good things for my brand. COVID slowed down the bigger, fast fashion companies and people are now shopping at smaller companies like Evita Loca. As far as being creative, I have a little bit of breathing room to think clearly because the high expectations and distractions of having to design for in-person events or develop concept pieces is temporarily on hold.

Personally, I am more in tune with myself and I've been able to tweak my creative process to be more efficient. The idle time has definitely gotten me to think of different ways to keep people engaged with my work digitally, and I'm excited to push those ideas as we get back to a new normal.

Through your work, you're essentially turning the stereotype of the durag on its head. As a Black creative, how important is it for you to push Black culture forward?

To me, being Black means different things in different cultures but obstacles tend to be similar across the board. With Evita Loca, my intention is to show Black culture as not a thing to use when convenient and fun but to be respected as part of the foundation society was built on.

Everything, from food, to music, politics, science, and beyond, a Black person has been there from the beginning. You don't need to know what African tribe you came from, the stories within the Black Diaspora are so amazing, we just don't hear them too often.

Through my designs, I want us to see our own worth and influence. Black people are needed and important, and the world should act like it.

How have your Ghanaian roots inspired your work and work ethic?

Growing up in the US, I found myself removed from my Ghanaian background. A lot of my work is a way of delving deeper into things that I might not have understood as a child and is a way of bridging that gap for me. I have a really strong work ethic because if I'm going to pursue something that nobody thought I could do; I'm going to put my all into it and be the best I can be.

Being first-generation American, you've taken a pretty non-traditional career path. Has your family always been in full support of Evita Loca?

My sisters have always been in full support and fostered my creativity. But my Ghanaian parents, not so much. When I tell my dad about being interviewed by PAPER, he'll probably ask, "Why didn't you get the front cover?!" It's a part of the tough love some African parents put you through. They want you to be the best because they knew what it took to come over here and we have to be mentally strong to carry on and not have our ways forgotten.

Va$htie and so many other cultural influencers have donned Evita Loca. Which others would you like to see rocking your line next?

There are so many! I would have a shit fest to do something for Issa Rae, Zerina Akers (I think I would learn so much from her), Rosalía, Tierra Whack, Rico Nasty, Sita Abelian, Cara Delevingne, Adwoa Aboah, and Ajak Deng.

Which is your favorite: silk or velvet durag?

Velvet! I love how it photographs. It has so much texture and it still maintains its luster.

Where do you see Evita Loca in the next five years?

I see myself walking down the street to get tea and passing complete strangers who are wearing Evita Loca.

My Black is RESILIENT.

Thanks to you, the world's a little wavier. What's next for Evita Loca?

I'll continue to create with my unique perspective and I'm working on a new concept for Spring 2021.